Should your kids see the newest Thor movie? Check out this Thor: Ragnarok Review | Safe for Kids? honest parent review of the sequel. No spoilers! #ThorRagnarok 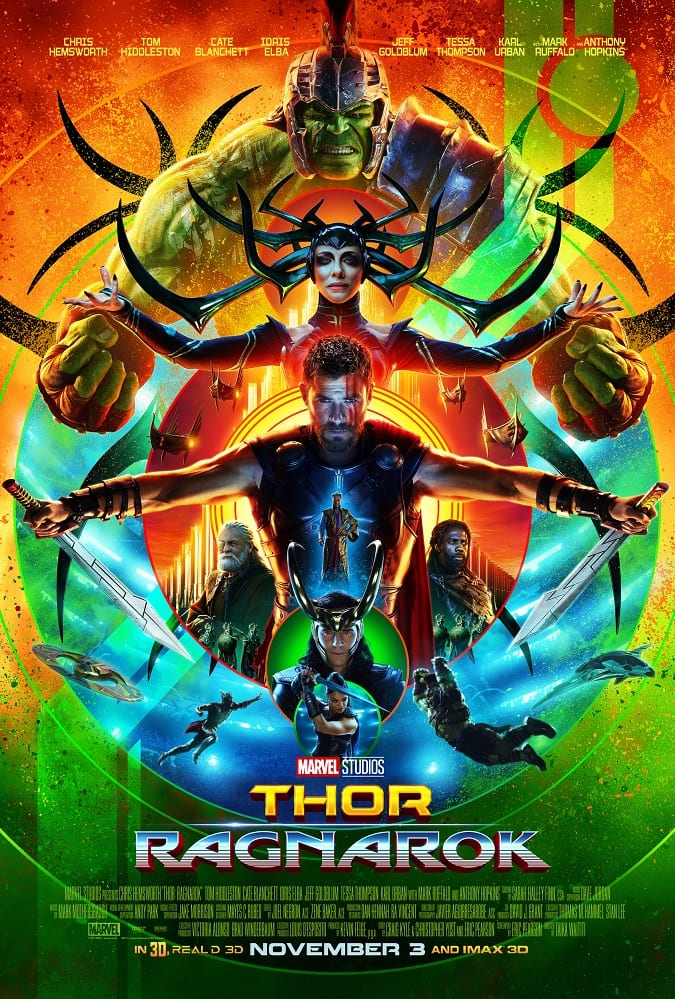 It’s already being praised as one of the highest rated Marvel movies of all time. But does Thor: Ragnarok, the third installment of the God of Thunder really outshine the other super hero films? Let’s find out in this spoiler-free parent review of the film. What about that PG-13 rating? How does this sequel compare to the first two? Was changing directors really a good decision for the Marvel universe?

As always, Marvel brings up the level of color contrast, really cool looking heroes, villains and special effects. We got to see Thor: Ragnarok in 3D, which I think was a good decision for the introduction of the new villain, Hela. Lots of flying swords, lightning and the beautiful setting of Asgard make for a really intriguing 3D film. Overall Marvel fans will appreciate the 3D visuals best, especially for the villain side of things.

Introducing Director Waititi brings a new side to the Thor story – while certainly still clinging to some roots of the original, I find that this director seems to glaze over the bad and focus on the funny instead. No agonizing moment is lingered on for long as Thor now seems to have a better grip on his temperament. This I think will either excite or confuse Thor fans. Character conflict continues to run throughout the story of loss, incoming super villain (can I look as good as Cate Blanchett when I get older?), climatic epic battle scene and ending with the assembly of a Thor super hero “team.”

Those that perhaps haven’t seen all of the Thor movies (or even any) will jump into this movie just fine. But those that have been following the saga closely may find this story not as deep or believable as first two. Though, let’s face it. It’s a sequel. I think the bigger focus is on the humor of the movie versus the story – as Thor seems to find his comedian side of his godliness in this film. Be prepared for lots of hilarious one liners and dialogue with Hulk, Valkyrie and Loki (always amusing). But I have to admit, I really miss Thor’s awkward inferred humor (back when he was just a god with no clue of earthly sarcasm). I found myself really missing his piece of him, but that was totally forgiven with the drawn out shirtless scene. 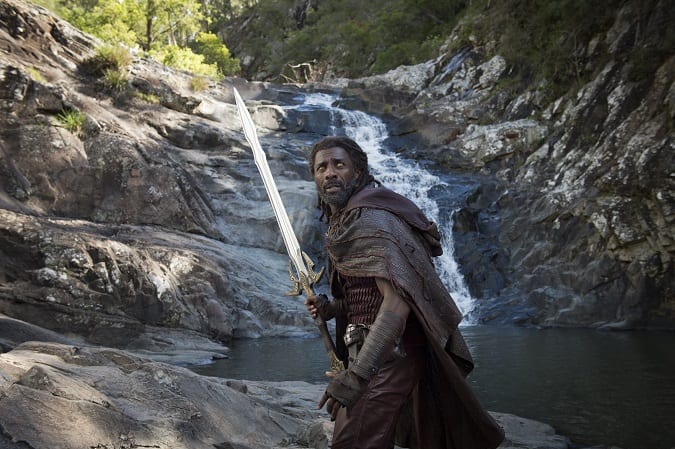 How Hulk came to be on the same realm as Thor – that part of the story is slightly shady. Valkyrie and The Grand Master added some flavor – but not my favorites of the film. Korg (big rock guy), Executioner (played by Karl Urban) and Heimdall (Idris Elba) were definitely better supporting roles. Not one but two end credit scenes also appear in this film. So be sure to stay glued to your seat for those (especially numero uno).

That PG-13 Rating | Should You Bring the Kids?

But I digress. Let’s dive into the kid-friendly portion of the review. As far as language goes – it’s about moderate. I counted at least 4-5 good swear words (thankfully nothing too harsh like the F-word), but mostly coming from Thor. There are definitely some sexual innuendos that come into play about Thor’s hammer that may or may not raise some questions with your kids. There’s also multiple references to the word “anus” that may bring an awkward family discussion to the dinner table. Be warned.

If you’re looking at Thor: Ragnarok from purely the violence standpoint – most of the film is pretty accurate with the Marvel action intensity. Sci-fi violence without being completely gory is throughout most of the film. The climatic battle brings the intensity up a level when Hela battles Thor (it’s “eye” raising to say the least), Hulk and a giant creature and a scene with the Executioner that may be a little intense for younger kids. 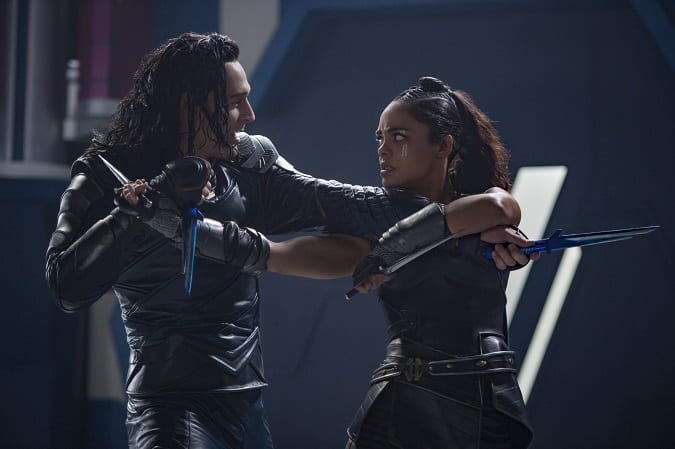 From a mom standpoint – I think my 9 year old could handle the Marvel violence, but I certainly don’t think he’s ready for the language and innuendo side. The long dialogue scenes may also be a bit boring. So I recommend early teen (about 11-13 years old) and/or hardcore Marvel kids to be about the age range of recommendation. Sorry, son. You’re going to have to wait a few years. 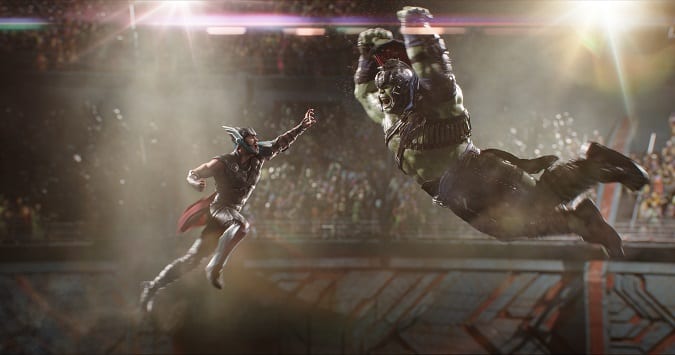 When I was asked to give my 2 cents as I left the theater last night, I told the reporter 1 word: “spoof-y.” And to be honest, I think that about sums up how I feel about the movie. It wasn’t as intense as the first movie or as dark as movie 2. But I do feel like Thor had a bit of an identity crisis in this movie. Has the God of Thunder been so under the influence by Earth that he picked up all of the sarcasm and humor of mortals? Maybe.

But overall, I would say that Thor: Ragnarok has the sarcastic humor of Deadpool minus the overt language and the fun of Guardians minus the cool music (except the one Led Zeppelin song) and the action of Avengers minus the chaos. It’s Thor in his laid back phase of his life – perhaps still trying to find his signature “thing” in this crazy intertwined Marvel universe. I’m not quite 100% sure he’s found his voice yet (maybe it’s like a Samson thing since he cut his hair), but he definitely found his thunder. Fun, quirky and definitely “spoofy,” families will either appreciate and embrace or walk away confused by this new version of Thor. But one thing’s for sure, guaranteed laughs will be had by all. 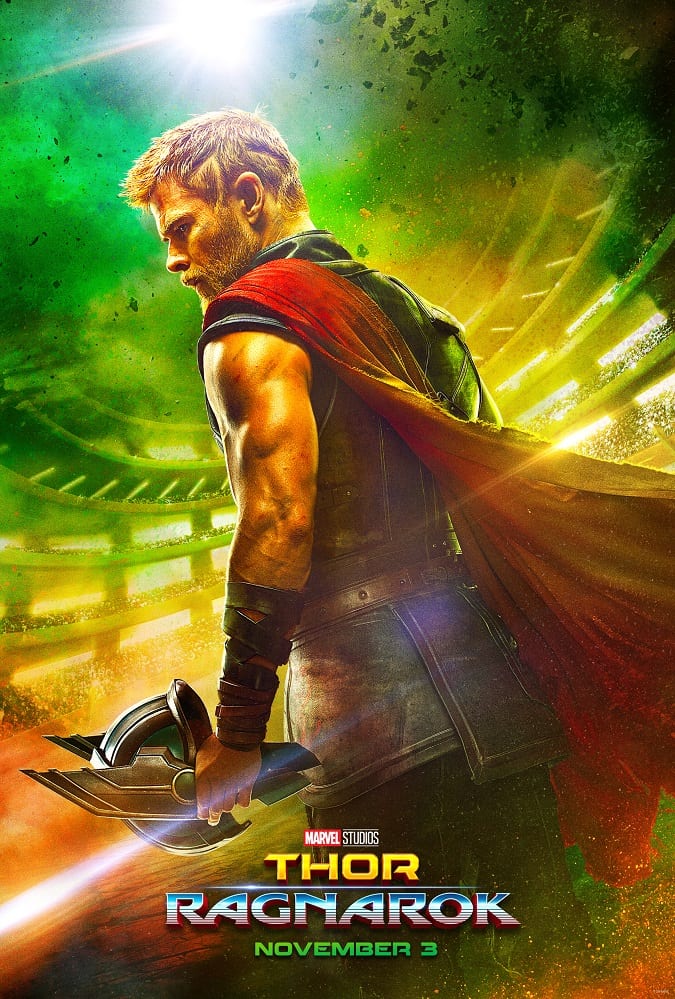 Are you going to see Thor: Ragnarok in theaters with your family?