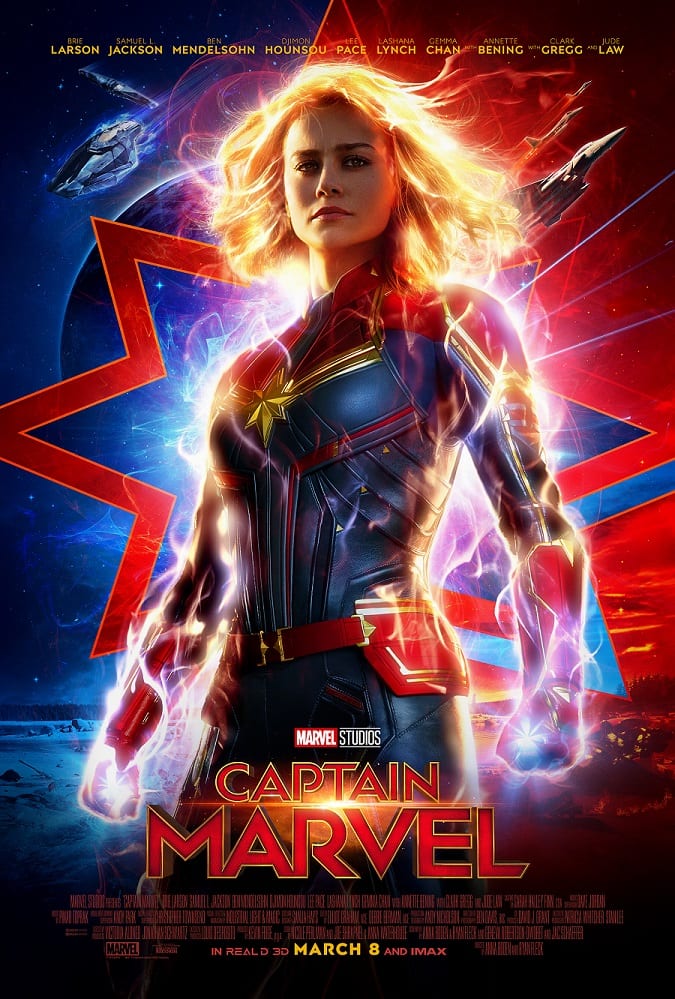 She’s already legendary, and the film isn’t even out yet. Captain Marvel, rumored to be the key to the Marvel Universe, the strongest Marvel super hero ever…oh, and she’s a WOMAN, y’all. There’s a lot riding on this Marvel film, along with really high expectations. And if you have kids like me, they’ve been asking to see this film – A LOT. But does Captain Marvel live up to her hype? In this Captain Marvel Movie Review | Safe for Kids?, I’m talking visuals, the story, that PG-13 rating, and sharing whether I’ll be letting my own kids see this one. No spoilers here.

It’s Marvel CGI at it’s best. The visuals for Captain Marvel were heavily super hero based, but not overpowering. There was no 3D preview for this movie, but any hardcore Marvel fan will definitely want to splurge for the extra detailed photon blasts and the action scenes. Based in outer space, other worlds and Earth, there’s definitely a lot of visuals to take in. And that Captain Marvel costume – just saying.

It’s a blast from the past, literally. I had to constantly remind myself – this is a prequel, an origin story. Nick Fury has two eyes. VHS tapes, corded phones and grunge looks – there’s definitely a generation gap that takes place during this movie. But being a prequel has it’s advantages. Captain Marvel definitely wove in some really fun stories and some old characters from the Marvel universe into this film. A few plot holes filled here. A few character twists there. You slowly uncover Captain Marvel’s past throughout the film as flashbacks and disjointed memories fill the screen. And by the end of the film, you’re all caught up. The pacing is slow, as an origin story usually is. Don’t expect the action packed pace of Avengers.

With Nick Fury as co-star, I thoroughly enjoyed the humor, the banter, and a little insight into life B.A. (before Avengers). Look for some great Marvel character cameos (and yes, one that will pull at your heartstrings), pop culture flashbacks, angry chick music and a few blasts from the past. And while Goose steals the show, you can’t take away from the undeniably strong female leads (and more than just Brie Larson).

The overall story will have you leaving the theater with feel good vibes. Earth shattering? No. But entertaining, yes. Be sure to stay after the credits for 2 end credit scenes – one at the very end. 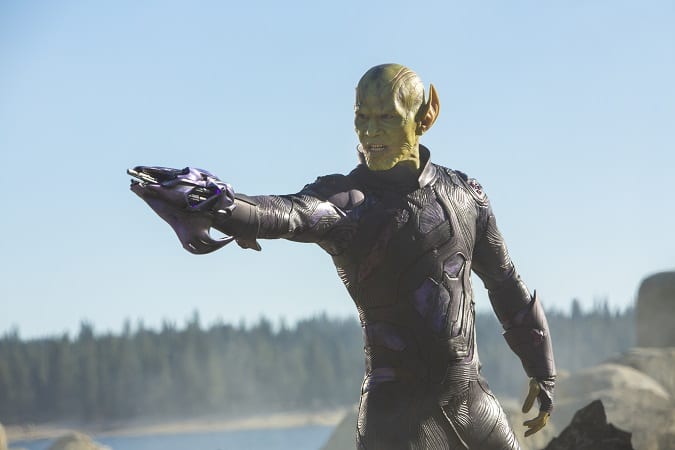 Ok, parents. So let’s chat about that Captain Marvel PG-13 rating. As with all Marvel films, that PG-13 sliding scale can vary greatly. So if you’re on the fence about taking your kids, here’s the rating broken down:

Language. I counted a total of 14 possible. Four “h-e-double-hockey-stick” references, two “sh*t” phrases, three “donkey” liners, 2 “damn” words, and one illegitimate child. Mild compared to other Marvel films. No crude humor or overly degrading conversations either. I was pleased that the language was overall tamed down for this film and not necessarily as the punchline. I actually only counted two the first time I screened – that’s how “background” the words were – definitely encouraging for bringing the kids.

Violence/Suspense. The action sequences do get intense and suspenseful in some parts – especially in some of the chase scenes. Alien combat, “blue” blood, and super hero violence all present too. There’s also one implied kill shot (not seen, but definitely perceived). But to compare, I would say more on the level of Guardians of the Galaxy violence versus Infinity War violence.

Adult Themes. No bedroom scenes. No awkward conversations. There are discussions about war. Obvious violence too. Overall, surprisingly mild content of this film. That being said, Captain Marvel is very dialogue heavy too. Origin stories usually are with character build up. Some plot points will go over your kids’ heads and there may be lots of questions, especially since the movie doesn’t play out in sequential order. So if you have squeamish children, definitely keep that in mind. 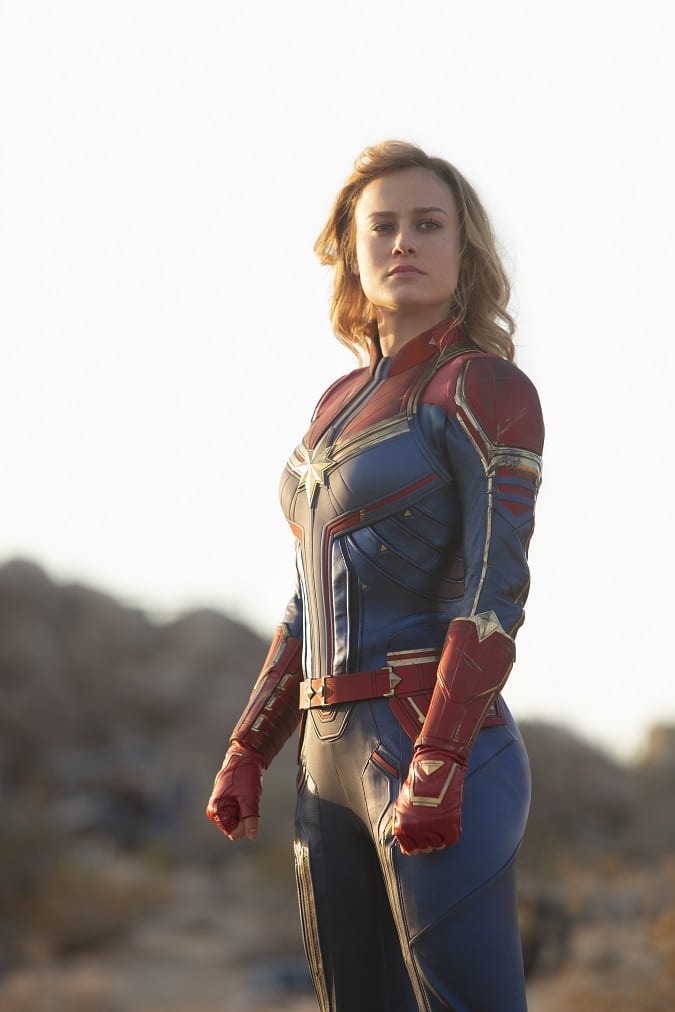 While I liked Captain Marvel, I think the hype definitely played a role in my overall feel of the movie. Was it the most interesting plot line? No, it was kind of predictable. I didn’t get the “wow” like I did with the first Avengers movie. But did I leave feeling entertained? To closely compare to another Marvel film, I would call it a less intense Captain America movie. Not quite as funny as Thor Ragnarok or Ant-Man. Not quite as stand alone as Black Panther. But did I leave with good Marvel super hero feels? Of course.

Will I be bringing my own kids to see Captain Marvel? My 10-year old son is all over this one. I definitely want him to go. My 6-year old daughter though? I’m on the cusp. The action sequences do get intense and suspenseful. I definitely let out at least one audible gasp during the film. I can definitely picture her burying her face for some of the more intense scenes. But with more “alien” violence over “human” violence, Captain Marvel is one of the milder films for kids. I would potentially let her watch – mostly for the strong female empowerment.

Captain Marvel does a good job in showing just how strong girls can be – even little ones. You don’t need an overly revealing costume or a man to save you. Carol Danvers stands tall on her own, taking in her own weaknesses and making them her strengths. She’s not exactly the most iconic female super hero (Wonder Woman fans?) or the most memorable personality, but she holds her own.


Even though not overly impressive, this look good, feel good, female empowered super hero film does play a critical role in the Marvel Universe. And there’s good reason why Captain Marvel is being released just before Avengers: Endgame. Marvel fans will enjoy the little Easter eggs and plot hole fillers, as well as some fun character appearances and backstories too.


And while certainly the most powerful super hero in the Marvel Universe, Carol Danvers wasn’t the Endgame savior that the hype played her up to be. At least not yet. But the foundations are set. Hopefully this Captain Marvel Movie Review | Safe for Kids? will you determine whether your children will be seeing this film as well. There’s a good chance BOTH of my kids will be on board with this film. 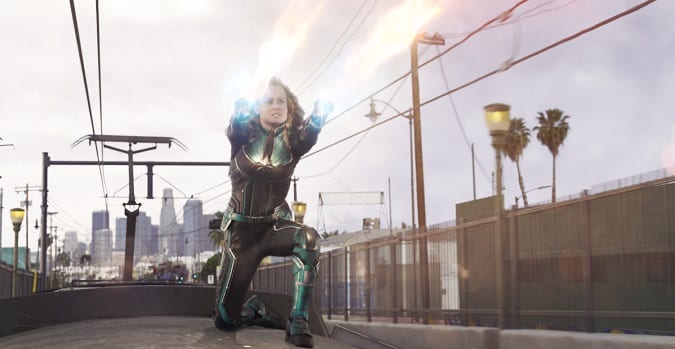 Looking for more parent movie reviews like Captain Marvel Movie Review | Safe for Kids? Check out these popular ones: