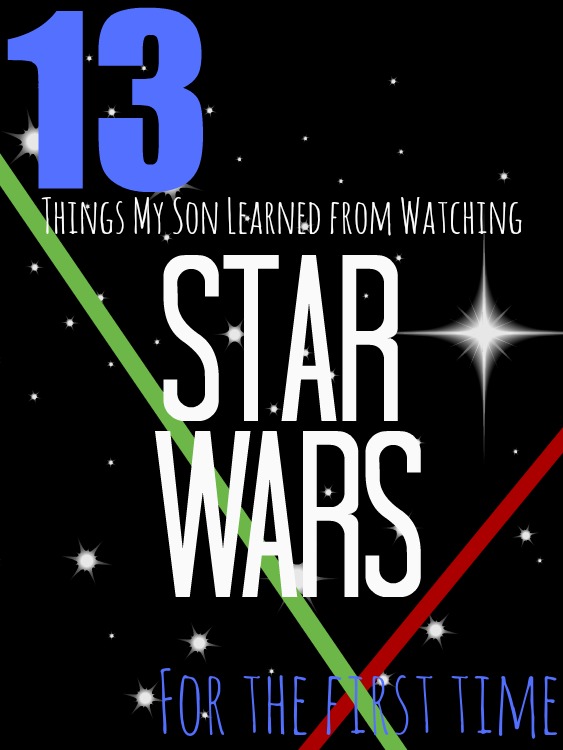 Hey, can someone read this to me? Is this a reading movie?

My kid reads. He even reads fast. But then stretch out words to scroll across your screen at a weird angle and to music of epic intense proportions…it’s intimidating. And it’s not every day that you get to read words like Galactic Empire, Rebel Alliance, or Skywalker. Not even a full 2 minutes in and my little boy was definitely skeptical to sit and watch the whole movie. A movie where he actually has to read and do “work?” That’s preposterous! But after a little more coaxing, we headed into the movie.

Not that far into Episode IV, and my son is making spaceship cannon and blaster noises. Oh, boys! And to think we haven’t even heard a lightsaber clash yet! It wasn’t before long before my boy was up in front of the tv screen mimicking moves, explosions and fighting sequences, all with the signature Star Wars sounds you still can hear in your head today. I predict many more lightsaber battles in the future.

Mos Eisley is the place to party

Drinks, dancing, music and a whole bunch of really weird looking creatures. Must be Mos Eisley. And my son thought this place was awesome. “I want to go there!” Duly noted, this mom will be keeping my son away from strange looking bars for a very long time.

And he has a really cool cape. He’s evil. His breathing haunts kids’ dreams. And yet they still think Darth Vader is the coolest bad guy in the galaxy. As soon as my son laid eyes on this guy, instant bad guy love going down.

It’s interesting that I never really picked up on this during my childhood. But C-3PO and R2-D2 are the Abbott and Costello of the trilogy, at least to my 6 year old. Maybe I took them for granted, but this pair of robots had my son belly laughing through all 3 films. Super cautious and annoying know-it-all C-3PO pairs so oppositely with quiet, beeping and problem-solving R2-D2. By Episode V, we even had the R2 nickname down (that means the robots are “cool” in my son’s book). And while we are still trying to hammer out C3-PC name (how cute is that?!), those loveable robots have definitely left an impression on my son.

Do we really need more of an explanation than that? My little guy was enthralled with this little guy. All weird-looking (his words, not mine) and crazy (well, I might say that too), Yoda is definitely an iconic character in the movie. And definitely a barrel of laughs for my son to watch.

Leave it to the boy to find the kissing. Leia and Han. Leia and Luke. Wicket and Han? The world of the romantic additions to movies is not without a turned up nose from this boy. Good thing I’m not letting him watch The Notebook anytime soon.

Carbonite is a tough word to say

He kept trying to say carbon. Carbonate. Carbon-y. The Star Wars vocabulary is extensive, and it was tough at times to keep up with all of the strange names and lingo. But through all of the new creatures, new places and definitely new language, I couldn’t be more proud that he was able to understand the gist of each movie. Each one more gripping than the last.

Luke needs to save Dark Vader from the Dark Side!

Ok, seriously this was a shocking statement made by my boy during Return of the Jedi. And 100% unprovoked. Ironically, he came to this conclusion while poor Yoda lay on his death bed. How’s that for a deep thought from a 6 year old? I know. Deep. Really deep. Predicting his own foreshadowing of the movie, my son gets thoughtful as he realizes

My son seemed completely confused as to why there were very very small bears in this movie. We go from huge scary creatures and Stormtroopers carrying guns to these adorable huggable animals. The questionable looks were a bit worrisome if my son would actually take to one of my favorite characters in the films, Wicket. But as soon as those Ewoks opened their mouths, he was sold. Laughing and even dancing with those very tiny “bears” on screen were a highlight of my experience with him.

Wait, Luke and Leia are brother and sister?

This concept was harder for him to grasp. Didn’t they do the kissing stuff? I know, kid. I have a hard time getting that picture out of my mind too. This had to be told to him a few times to get him to understand that they are actually related, like he is to his sister. Than yeah…gross.

To watch the Death Star blow up twice, it’s the ultimate boy’s dream. Destruction on a galactic level….a new level of awesomeness has been brought to all of his future movie watchings. The bar has been raised. Good luck movies of today.

It’s not an epic movie without the victory. And this victory did not come lightly. There were many on the edge of his seat moments, and even a few yelps of “Oh no!” “Don’t do it!” “Be careful!” and “Yikes!” during intense battle sequences. (I loved his reaction to Lando almost falling into the Sarlaac pit. He was so worried while it was happening and so triumphant when he was pulled to safety.) And more than just the good guys winning. But it’s the fact that filmmaking of 1977 wins too. It didn’t take crazy theatrics, CG, or advanced technology to make a great movie. Great story telling and imagination go a long way to a classic movie as well. It was so fascinating that this series of movies still had the lasting effect that

Perhaps a mixture of tiredness, night watching and a bouncy 6 year old made this little bleep utter from my son’s lips. I won’t be letting him watch Ten Commandments any time soon. But overall, he sat and watched all 3 movies in 3 consecutive nights. And he woke up this morning, still talking about it. And he’s already asked when he can watch it again. We might have him ready to see The Force Awakens soon 🙂

I’ve done my job as a parent.

Have your kids watched the original Star Wars Triology? What age did they see it?