Should your kids see the Wreck-It Ralph sequel? Check out this Ralph Breaks the Internet Movie Review | Safe for Kids?, an honest parent review of the latest Disney animated release. No spoilers! #RalphBreaksTheInternet May contain commissioned links. 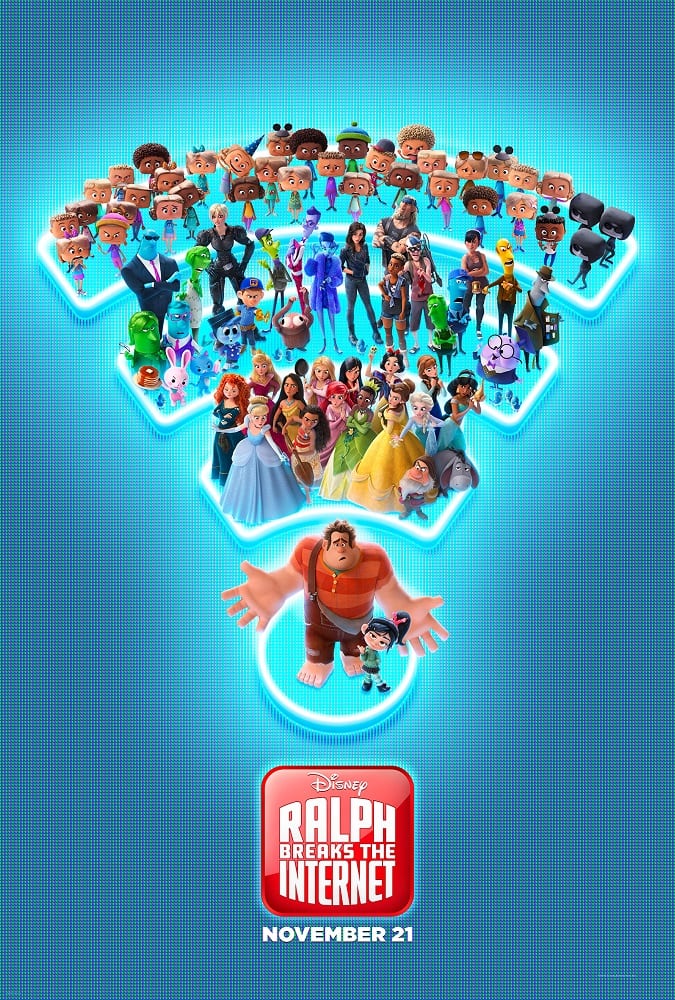 Did we “wreck-it” or was it “wrecked?” Disney has been pumping out the sequels lately – and it’s been a mixed bag of emotions for me. After Incredibles 2, I was worried about Ralph and Vanellope leaving their wonderful gaming world for the internet in the new film Ralph Breaks the Internet. Bad plan? Maybe. Find out if 6-years was worth the wait in this Ralph Breaks the Internet Movie Review | Safe for Kids? – where I fully break down that PG rating from a parent point of view, give my thoughts on the plot line and of course, no spoilers.

The internet looks pretty enticing. As always, Disney really steps it up when it comes to the movie visuals. And Ralph Breaks the Internet does not disappoint. It’s a visual feast for the eyes as Disney brings the internet to life with lots of color, imagination and fun. Now having seen this movie twice (regular, not 3D), I can appreciate all of the work that has gone behind the animation portion. Be on the lookout for lots of Disney, Pixar and Marvel Easter Eggs hidden throughout the movie, as well as visual internet gags. I saw the “A113” right away.

Wreck-It Ralph conquers the gaming world, so the next likely step is to tackle the internet. Made sense from a plot perspective. But I admit that I’m not a sequel lover. I’m an original fan. It takes a lot to wow me with a sequel plot line, especially when I know the dollar signs are the usual motivating factor over the love of the story line. It’s no Incredibles 2 or Toy Story 3, but Ralph Breaks the Internet holds it’s own and is a decent sequel.

But what is great about a sequel is that you can really dive into character development. So the relationship building between Ralph and Vanellope was really touching for Disney movie fans. Internet puns and social media gags aside, the story is really the star of this movie. There’s a ton of themes – really hard, heavy, deep, relevant themes that Ralph Breaks the Internet dives into – without fear. And at the end of the movie, you leave with a little more thought provoking wisdom. I love that, especially when looking for conversation starters with our kids.

I liked the new characters. Yesss is pretty amazing and NOT what I had expected for her character development. Shank was a strong new female character too (but would we expect anything less from Wonder Woman?). Now I will admit the climax of this film – not my favorite. It was a weird an unexpected twist, for sure. But kind of cringe-watching too, especially a second time. But you will love the characters a little more and still leave with the Disney feels. 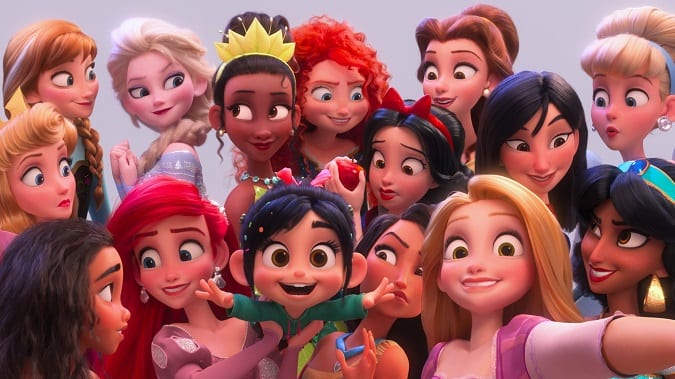 Bringing Back the Princesses

Yes, the Comfy Princesses get their own section for this Ralph Breaks the Internet Movie Review | Safe for Kids? For all of the social media chaos that surrounded the princesses making a return to the big screen, I loved them. I loved them A LOT. There’s something to be said about the challenge, the creativity, the diversity and the inclusiveness when the princesses meet Vanellope for the first time. Plus you get a side dish of friendship, acceptance, and female empowerment. It’s a meshing of worlds, story and even Disney taking jabs at itself. It was fun and definitely my highlight of the movie.

As you have seen in previous movie reviews like Incredibles 2 and Christopher Robin from just this year – the PG rating can vary WIDELY in today’s rating system. But in this Ralph Breaks the Internet Movie Review | Safe for Kids?, I’m going to break down that WHOLE rating for you – so you can feel good about taking or not taking your kids to see this long awaited Disney sequel.

Language. No language. Holy moly I’m so excited to say that. There were a few instances of the word “stupid,” one “buttload,” and a “doodie,” but really nothing else to report here. I’m so happy to see that the language from Wreck-It Ralph to Ralph Breaks the Internet reflects that of the first movie. So if your kids saw the first one, it’s safe from that perspective.

Crude Humor. As expected, a lot of the humor in Ralph Breaks the Internet revolves around the internet. From pop-up ads to spam to social media, there are some funny jabs that may go over the heads of little ones. Mild toilet humor too. Similar to the gaming humor found in Wreck-It Ralph, you should be able to compare the two quite easily for humor styles. Be warned there is a mention of a “sassy housewives” ad that may pose some questions.

Violence. Now here’s where Ralph Breaks the Internet starts to diverge from the original. A new “Slaughter Race” internet game can be compared to Hero’s Duty – but perhaps with a few more pop-up scares that your kids may not be expecting (try to see the trailers with the shark if you can to give you an idea). There is an instance of fire in that scene that may scare as well.

But that’s not all.

The reveal of the villain/antagonist in the movie is quite disturbing and slightly violent. Now, I won’t give away any plot points, but the framing of the “villain” may give your kids a few nightmares and at the very least, a conversation after the movie is over. My 5-year old daughter did jump into my lap for this part – saying that the scene was “creepy,” but no long lasting effects. I would say Ralph Breaks the Internet is overall less scary than Incredibles 2, for reference.

Adult themes. Now I normally wouldn’t put this here – but I did want to address some deep themes that you may or may not want to introduce to your kids. Obviously technology, the internet and social media are all BIG drivers of the story. And this does include some of the evils that go along with them – including dealing with things like hateful social media comments like “I hate him,” addiction, personal insecurities, friendships, trust, and ego. Using very relevant examples from our kids’ lives, Ralph and Vanellope tackle today’s issues with our kids.

Ralph Breaks the Internet is a sequel – and I will say it’s hard to ever top an original. Wreck-It Ralph was such an iconic movie, especially for those adults who grew up as gamers. This wasn’t an Empire Strikes Back to A New Hope kind of sequel. Was it good? Absolutely, it was fun. Definitely better than a Mulan 2 or a Little Mermaid Returns to the Sea. But did it have the story of Incredibles 2 or the sobbing emotional feels of Toy Story 3? No. I got teary at one point – but not full out crying. I laughed out loud. I smiled when it was over. But more importantly, I left feeling a little heavy. That’s when Disney got me, and that’s why I’m applauding.

I think Disney carefully chose when to release this movie – and with good merit. Thanksgiving is a time when we as families reflect on our lives and what we are thankful for. And some of those things in our lives can be evil and need to be adjusted. The internet, social media, insecurity, addiction, fulfillment from the world – these are tough issues and yet SO relevant to what our kids are dealing with today. By talking about these issues through the characters that our kids know and trust, these stories impact our kids in a meaningful way – in a way that only Disney can present.

The impact of this sequel can be great. Maybe Ralph Breaks the Internet will have a child second guess about that photo they were going to upload to social media. Maybe it will stop a child from creating a new YouTube account. And I think that’s the bigger picture here. Those personal insecurities that we all hold can easily be translated to our daily lives – and our imprint on the social world. I applaud Disney for tackling our technology driven addictive society, head on. Ralph Breaks the Internet should create some really great family conversations about the internet, social media and the impact it has on our lives, especially our own insecurities and how we deal with those.

Here’s the big picture, parents. I liked the movie. I think your kids will like it. I think everyone will go home with something to think about, talk about, and hopefully do something about it. But my heart lies with the original Wreck-It Ralph. I don’t think a sequel could ever outshine what the first movie feels were for me. Or maybe I’m just kind of done with Disney’s quest for more sequels. Be sure to stay for the 2 end credit scenes – definitely fun note to end with.


Hopefully this Ralph Breaks the Internet Movie Review will help put your parent minds at ease. Definitely a lot to consider before taking your kids, but there’s so many deeper reasons for them to watch – perhaps with longer than “pop-up ad” effects. 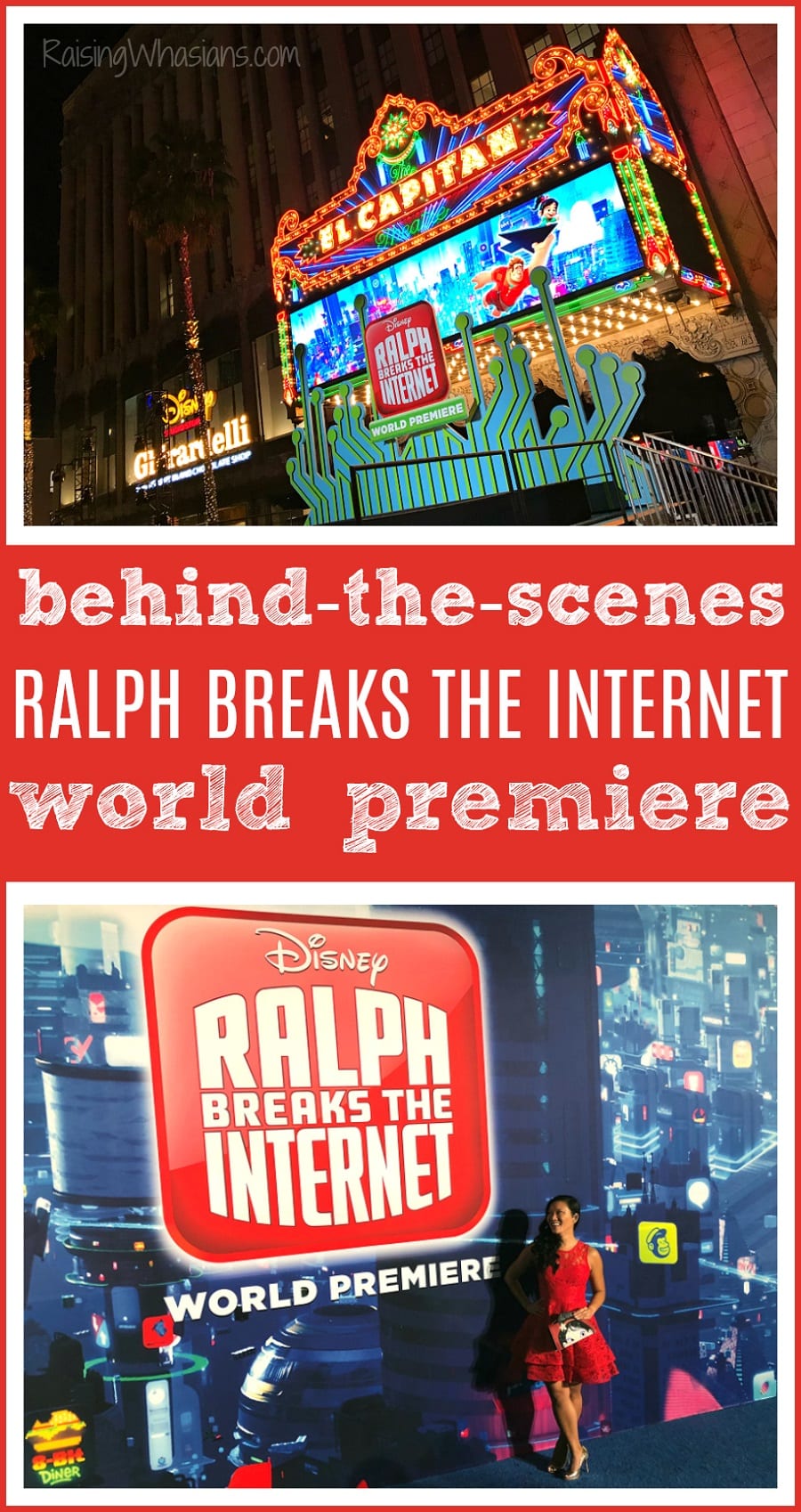 Ralph Breaks the Internet hits theaters November 21, 2018. I’m curious to see if you’ll find this Wreck-It Ralph sequel was worth the 6-year wait.