Should your kids see the newest Disney Winnie the Pooh film? Check out this Christopher Robin Movie Review | Safe for Kids?, an honest parent review of the latest Disney release. No spoilers! #ChristopherRobin May contain commissioned links. 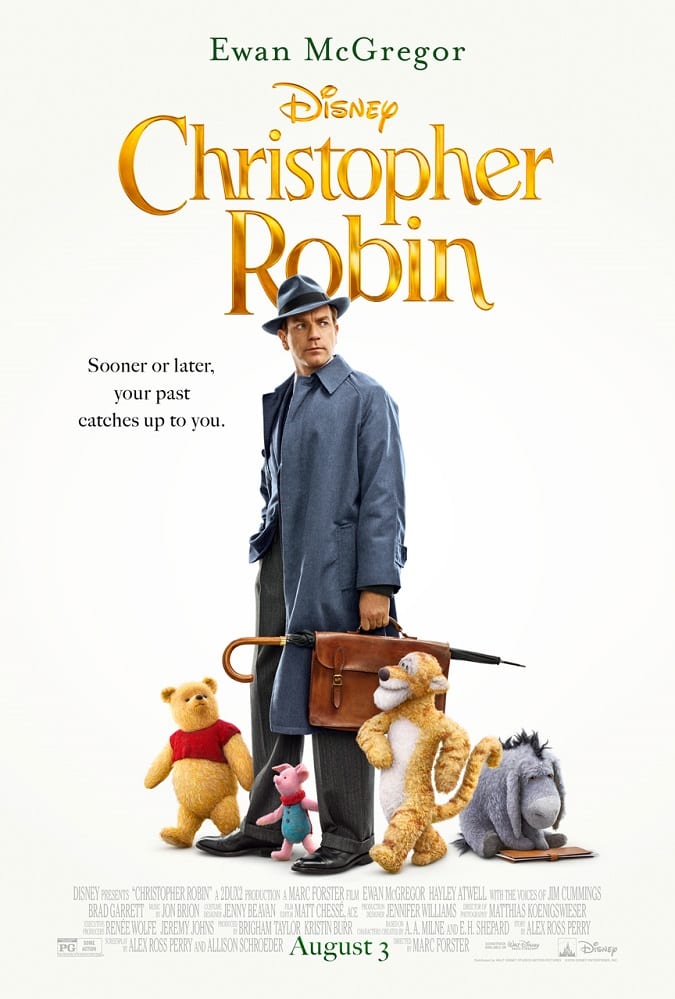 Disney has been on a live-action film kick. And next in the line of films is a live-action Winnie the Pooh, aka Disney’s Christopher Robin. While these certainly well-loved characters have earned their place in the Disney film world, the thought of a Winnie the Pooh sequel seemed…off. After the Incredibles 2 PG rating, I was a little leary about another Disney PG rating. In this Disney’s Christopher Robin Movie Review | Safe for Kids? we breakdown the PG rating from a parent point of view, thoughts on the plot line and of course, no spoilers. Let’s see if Disney’s newly imagined Winnie the Pooh is for adult and children audiences alike. 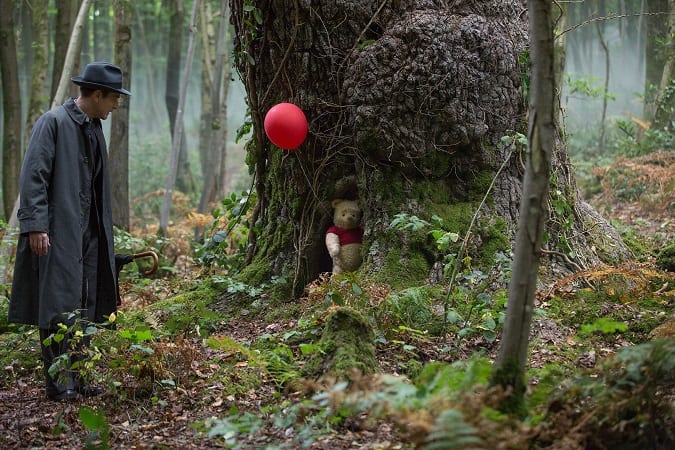 Live action stuffed animals in old time London. There’s definitely a “gloomy whimsy” that is hard to capture and master in this Christopher Robin film. Balancing cheery colors and worn/loved memories, the visuals of this film were both brightly stunning and old nostalgic. Simply complicated – a blending of old and new. A delicate balance to savoring our old childhood memories and appealing to the younger generations – I loved the overall visuals. I’m definitely applauding Disney for not overly complicated the CGI or making this into a 3D film that it’s not.

The story follows the life of Christopher Robin – what happens after he grows up. Now with the world, responsibility and a family of his own, how does the characters of his childhood affect his today? If I had to categorize Disney’s Christopher Robin, it’s Mary Poppins meets Pete’s Dragon – without the music. This movie has all of the signs of classic Disney. Expect all of your Winnie the Pooh characters to take on their familiar personas – Eeyore is 100% Negative Nelly, Tigger is bouncing out of control, Piglet is afraid of just about everything, and Pooh is all tummy before thinking. Even Rabbit is bossier than ever. Thankfully Disney stuck with the usual suspects. Ewan McGreggor plays his classic role – fitting in perfectly in the Winnie the Pooh/England time-standing still father, and of course winning all of us over in the process. 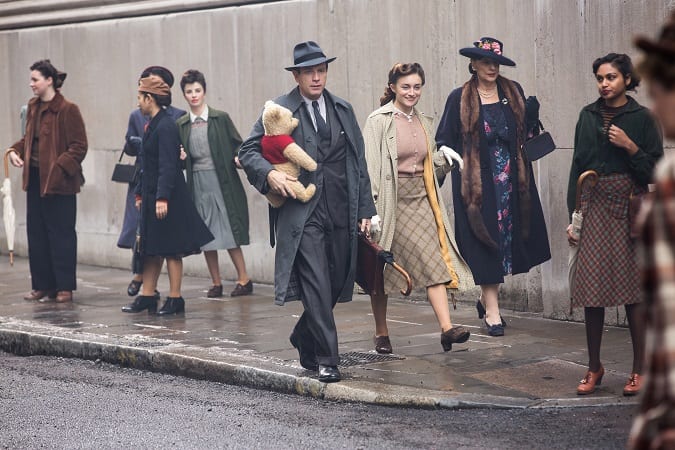 While appealing to kids of today with worn and loveable live action stuffed animals and a few humorous “Oh, Pooh!” moments, this movie really speaks deeper to the childhoods within us adults. We all grew up with the Pooh in some way. Rekindling that childhood nostalgia with an overall feeling of “carpe diem,” Disney reminds us all that nothing in life is ever more important than love, family and friendship. It’s a movie of bridging generations – helping families to find just one more connection to each other. Don’t expect any crazy twisting plot points or crazy cliff hangers – it’s a look good, feel good movie. That’s it. 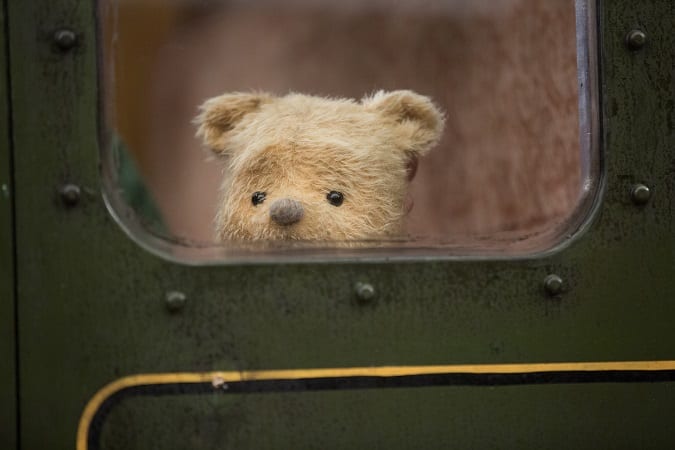 Another Disney PG rating. This is yet another example of how NOT all ratings are the same. The PG label on Incredibles 2 is not even comparable to Christopher Robin. But does that mean that Disney’s Christopher Robin movie is 100% ok for kids? Not exactly.

Language. OH MY GOODNESS. It has been such a long time since I’ve said that there is no swearing to be found in a kids movie. It’s so refreshing and a wonderful reminder that Disney can make a beautiful classic movie without bad words. Period. Those little ears won’t have to worry about associating language with their loveable Winnie the Pooh characters. And I love that.

Violence/Suspense. Very mild. A quick war scene with explosions (no blood), mild action sequences around London, and a very brief “in the dark” suspense moment, my 5-year old daughter had no problems sitting through this film. I think all ages could really handle the overall feel of the movie. Again, very classic Disney.

Boredom. So this is where parents will want to pay attention. Unlike the cartoon shows or the usual live action Disney films, this movie builds very S L O W L Y. You need time to follow what happens to Christopher Robin post-boyhood. Yes, there’s a bit of sadness – but most kids will miss that. But honestly there are times when the movie is just slow, dialogue heavy, and nostalgic. It’s a pace I would expect for this film, but your wiggly worms may not. A few times my 5-year old was on the cusp of leaving her seat to wander the theater – so definitely keep that in mind for the little littles (aka maybe more popcorn?). But if they can sit, it’s a wonderful all-ages/bring-the-whole-family kind of film. 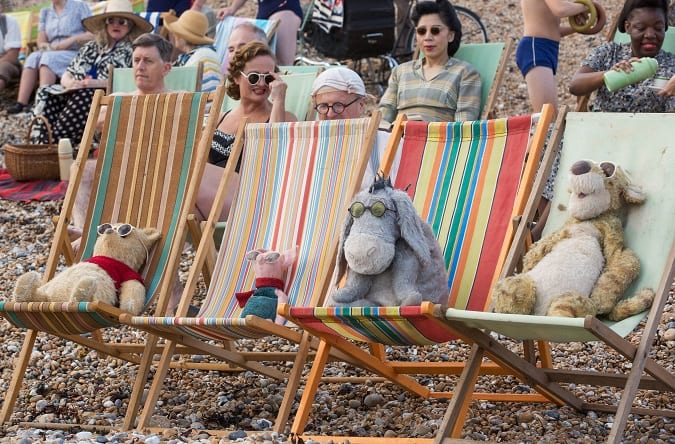 Is Winnie the Pooh Taking After Marvel?

End credit scenes. I must admit that I was surprised to see the lights stay dark once the end credits start to roll. There’s not just one but two end credit scenes, but more for the hardcore Winnie the Pooh fans. Those that miss it, you won’t be missing anything crazy important. Promise.


Disney’s Christopher Robin is in theaters this Friday, August 3, 2018. Bring the magic of childhood back to your family, your whole family. Hope this Christopher Robin Movie Review | Safe for Kids? helps your family determine if your kids should see this instant old-school Disney classic. In my opinion? It’s for the kid in all of us. 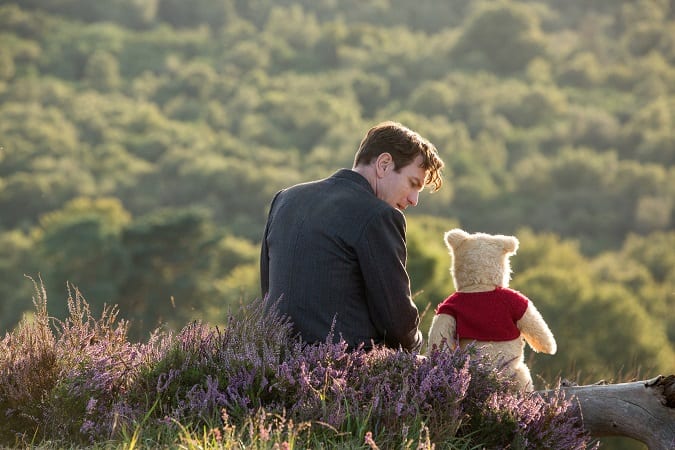 Will you be taking your family to see Disney’s Christopher Robin?

Looking for more movie reviews for kids? Check out these popular ones for the summer: