Should your kids see the newest Marvel film? Check out this Ant-Man and the Wasp Movie Review | Safe for Kids? an honest parent review of the latest super hero release. No spoilers! #AntManandtheWasp May contain commissioned links. 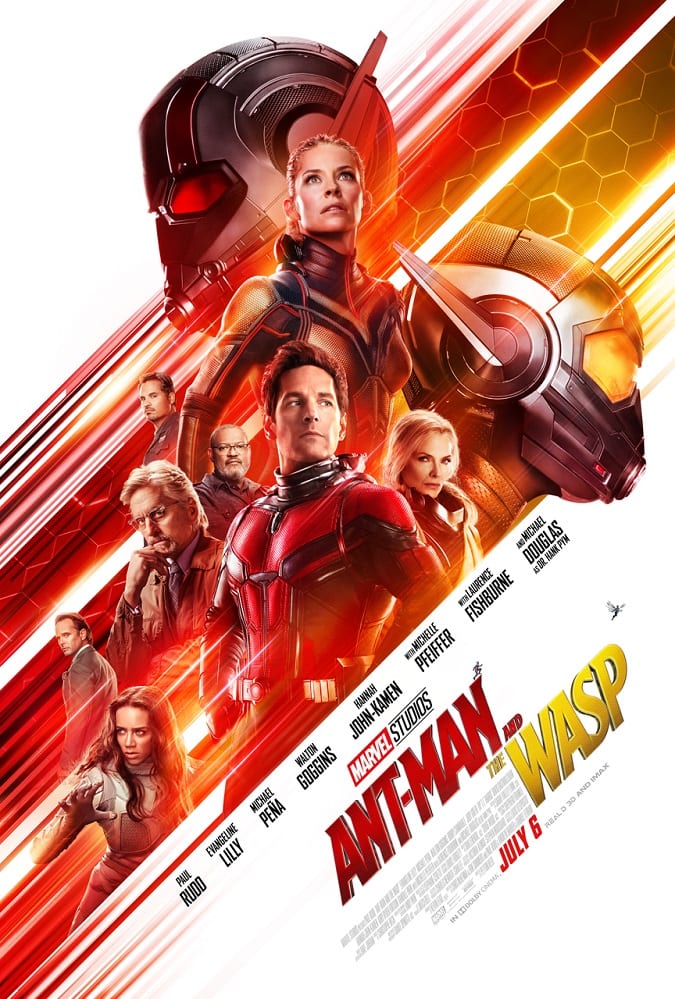 Ant-Man and the Wasp Movie Review | Safe for Kids?

After a heart wrenching and heavy Infinity War movie, we find a friend in the darkness. Ant-Man returns in Ant-Man and the Wasp – but does this sequel really find a home in the Marvel universe? Find out if this Marvel film is a sequel worth watching this summer in this Ant-Man and the Wasp Movie Review | Safe for Kids – a breakdown of the PG-13 rating from a parent point of view, my thoughts on the story plot line and if I will be bringing my own kids to see this one. No spoilers, as always. 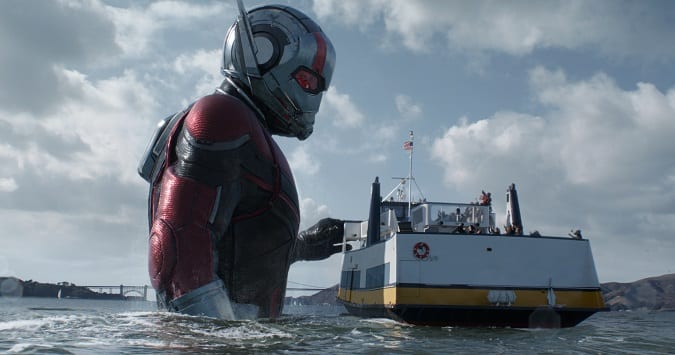 As per usual, Marvel doesn’t disappoint in the visual department. There’s definitely a lot to look at and take in with a Wasp, Ghost and a whole other Quantum realm to visualize throughout the film. I especially enjoyed watching the Wasp scenes, and definitely wish there were more scenes of her fighting together with Ant-Man. Lots of CGI animation, fun action sequences, and cool new characters, this Ant-Man sequel was a lot of fun to watch in IMAX 3D. 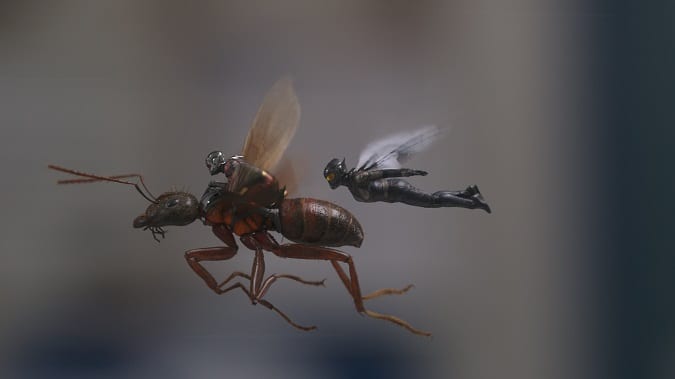 Sweet, hokey, and the class clown of the Marvel gang, Paul Rudd has really grown comfortable in his role as the unlikely and lovable super hero, Ant-man. But this time the dynamic changes as the Wasp comes to his side as his partner. Immediately following Civil War but before Infinity War, Ant-man is in his own Marvel bubble, shielded (“SHIELD”-ed, get it?) from what’s going on with “Cap” and his other Avengers buddies. I applaud Evangeline Lilly and Michael Douglas – they really fill out and balance the Ant-Man team, both having their own inner struggles to deal with as well. Once again Michael Pena steals the show with his antics and signature storytelling. He deserves his own costume, just saying. 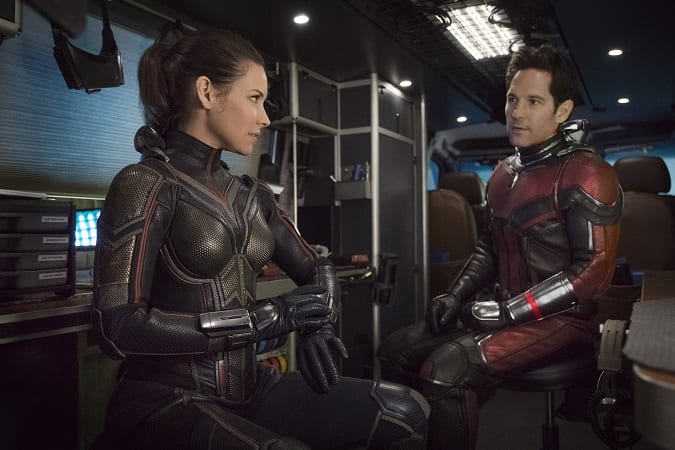 Family is a constant theme throughout the film. And I have to say, it’s refreshing to see in a Marvel movie. Whether talking about his complicated personal family or his begrudgingly framily of Doctor Pym, Hope or his team of “wombats,” I really enjoy watching these hilarious and awkward heroes shine. There may have been one too many awkward stares between Hope and Scott – but hopefully you can muscle through those for a deeper connection to the Ant-Man that we know and love. Definitely a sequel movie, don’t expect this Ant-Man to top the original. But watching all of these characters grow and evolve (yes, even the wombats) was definitely entertaining and worth a trip to the movies this summer – if only to fill in a few Marvel plot holes. 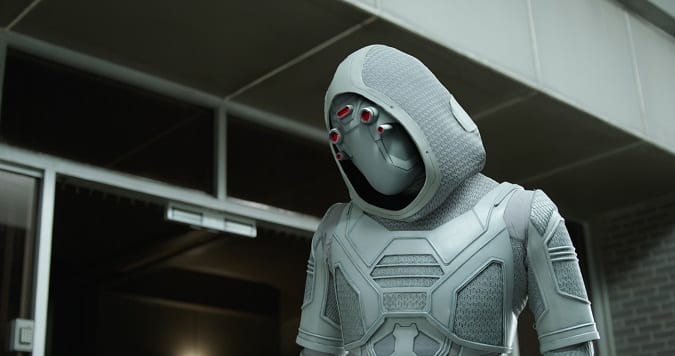 Also not surprisingly, that PG-13 label got slapped onto this Ant-Man sequel faster than you can say Pez dispenser. The action is definitely not the forefront of the movie – very little blood or gruesome shots shown (unlike Black Panther). However, there are a few intense fighting scenes with Ghost (who at the beginning of the movie reminds me of a horror movie possessed child with creepy eyes) with a few suspenseful pop outs.

Quantum becomes a highly overused term in the film as they dive deep into physics, technology and a whole realm of question marks. There definitely is some heavy science dialogue here that may bore some restless little ones (and let’s face it, some adults too).

Language is back in Ant-Man but seemingly calmed down to a few choice key phrases (mainly ass about 3-4 times, damn about 4-5 times, bullsh*t once, one instance of “Oh My G-d” and a Jesus Christ). I’m thankful that at least this time Marvel did not make the language portions the punchline of this Ant-Man movie. That was refreshing. Comparable to the language of the first Ant-Man film – it’s definitely what I expected. But use your discretion with your kids. 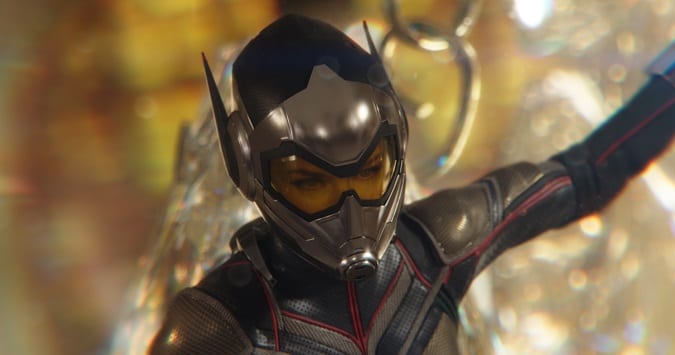 But I am happy to report that if your kids could handle the first Ant-Man movie, they will love the sequel. Enough chase scenes, action and funny comments that won’t go over their heads, this is really a kick-back and relax film with the family with a nice blend of family theme-ing throughout. Definitely a film that I could bring my 9-year old son to see, he is really excited for this one. But unfortunately with enough dark and intense scenes for my 5-year old daughter to climb into my lap again (see my Incredibles 2 movie review), she will have to wait. I definitely recommend Ant-Man and the Wasp for kids at least 7-years old and older, especially those children who love Marvel. 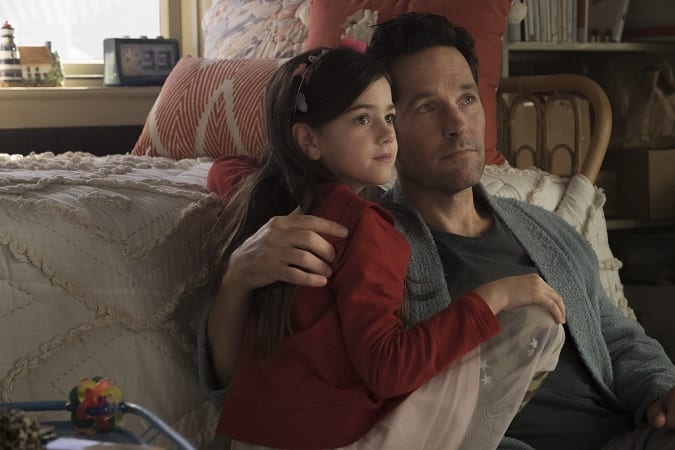 Ant-Man, he kind of grows on you. The red headed stepchild of the Marvel super heroes, Ant-Man has really asserted his role as the comic relief of the Marvel movies. I found Ant-Man and the Wasp as a much needed sequel after a very intense Infinity War. Relaxing, fun, and always up for a good laugh, it was great to once again find joy in a Marvel movie – just for entertainment’s sake. While certainly not as mind blowing as the original, it was great to see Paul Rudd back where he belongs (and did he somehow get younger?). The supporting characters are back and are great in their roles. And I will give a small nod to Hannah John-Kamen (Ghost) and Laurence Fishburne (though certainly no Morpheus).

There will definitely be some overall missing Marvel plot points filled. And be sure to stay for the 2 end credit scenes (that first one will get you – you’ve been warned). The family is back and I’m excited to see Ant-Man and the Wasp as a family Marvel film of the summer. Welcome back, friend.

Ant-Man at the Wasp buzzes into theaters on July 6, 2018. Will your family be watching this Marvel movie sequel?

Shop Ant-Man and the Wasp now: