Should your kids see the Mary Poppins sequel? Check out this Mary Poppins Returns Movie Review | Safe for Kids?, an honest parent review of the latest Disney film release. No spoilers! #MaryPoppinsReturns May contain commissioned links. 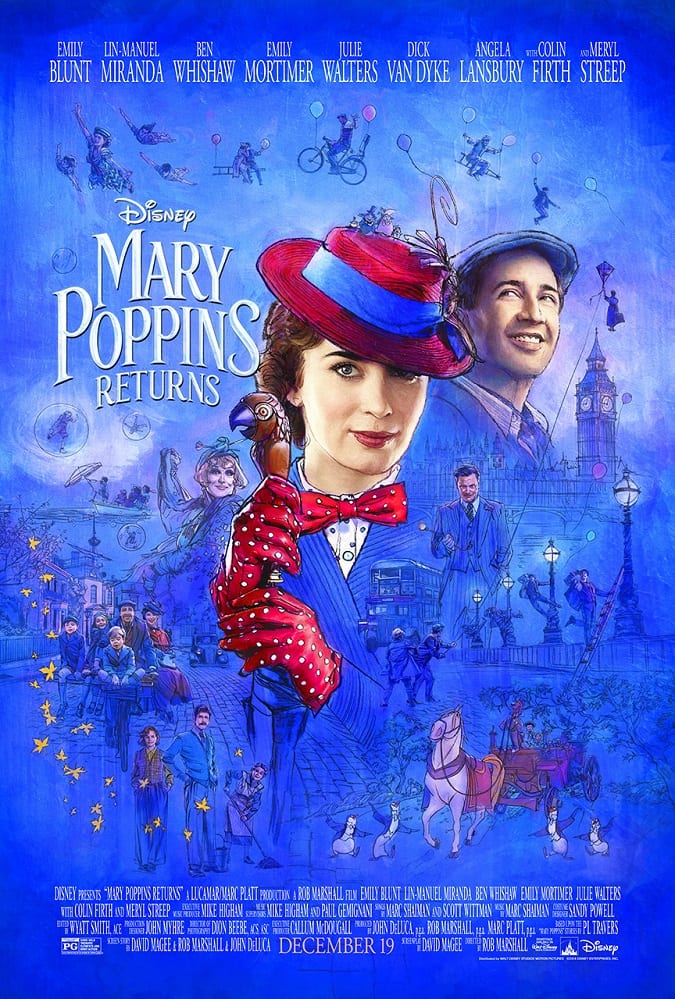 The Golden Globes really put a damper on this review already. 4 nominations including Best Actress, Best Actor, Best Score and Best Musical/Comedy – it’s easy to gloss over a kids movie review with praise as high as this. But if you’re reading this, perhaps you are willing to pull back the blinders just a little. Because there’s ONE scene we need to talk about in this Mary Poppins Returns Movie Review | Safe for Kids? as we breakdown the visuals, the story, and that PG rating for parents – always from the perspective of if you should bring your kids to see this film.

Is Mary Poppins Returns “Practically Perfect” in every way? Or did Disney go too far to recreate a classic? I’m giving you a full parent review – no spoilers, please.

Mary Poppins was a film beyond it’s 1964 debut. More than just a story and some catchy songs, the animation combined with live action scenes were ahead of it’s time. And Disney had an incredibly difficult job – preserving the art that is Mary Poppins while introducing new filming techniques that didn’t exist over 54 years ago. And honestly, I applaud Disney. It’s seamlessly “Mary Poppins” in every way. Enhanced but not masked, the visuals play such an important role in bringing this new Mary Poppins to life for our younger generations. It was beautifully done. 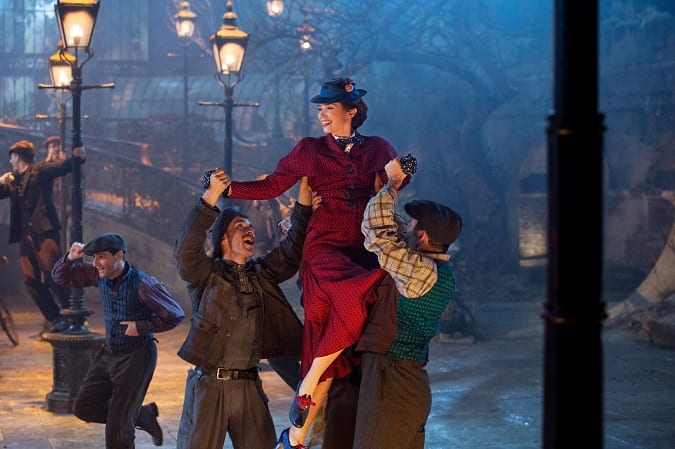 A sequel or a remake – that is the question. While Disney framed Mary Poppins Returns as a sequel, I have to admit that the plot points were awfully close to the original. That’s not to say that there’s some genuine story to be had here. I mean, that’s why the original Mary Poppins is such a classic for many, including myself. The musical numbers combined with the storytelling was smart. And the casting of Emily Blunt as Mary Poppins was smarter – she was amazing. Casting Lin-Manuel Miranda at the prime of his career – also a smart move on Disney’s part. And had me almost fooled – almost. It wasn’t a sensationally plot twisting story, but it is strikingly similar to a Mary Poppins story you may already have heard about. It’s a modern day fairy tale that will have your family leaving with good vibes and a few dancing shoes – similar to the feels of Disney’s Christopher Robin. 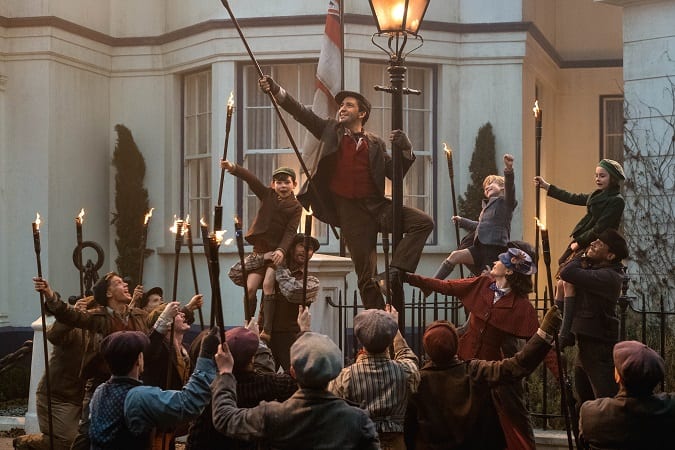 But did I tear up? Absolutely. But it wasn’t during the brilliant cameos or even the climax of the movie. Within that first Emily Blunt song, I found myself getting misty eyed. Between the creative blend of animated and live-action visuals, the impeccable musicality of the crew and the whimsical childhood feels that brimmed from my soul – Disney had me. So we can argue over the familiar plot line, but at the end of the day, Mary Poppins Returns was a story for our very souls. And I can appreciate that. 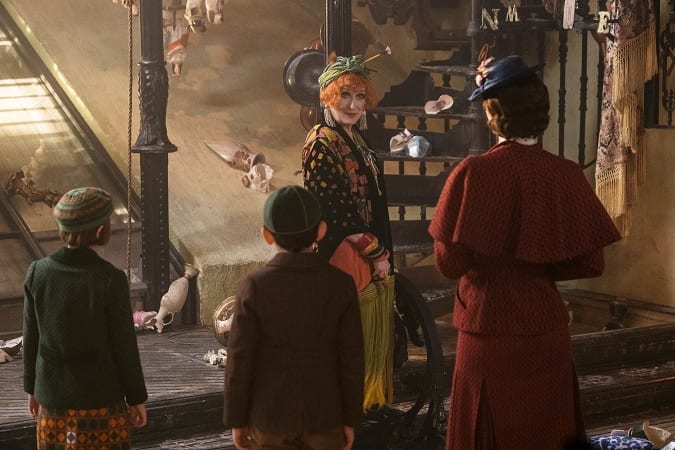 Mary Poppins Returns has been rated PG for “mild thematic elements and brief action.” As per usual, the PG rating can be vastly different just this year – anywhere from Incredibles 2 to Christopher Robin. But here’s where that ONE scene comes into play. And parents, take note.

Language: NONE. This makes me SO incredibly happy. To see that Mary Poppins hasn’t aged or changed her mannerisms is relieving. And thankfully, the rest of London was on board too.

Violence/Suspense: Those dark alleys of London show up again. But briefly, and without a scary looking dog. Rest assured that your kids of all ages can appreciate the preservation of Mary Poppins in other subtle ways – like embracing the same themes. So no violence, and very little suspense was appreciated.

Adult themes: Don’t let the cute-sy cartoon characters in the background fool you. It was like a scene right out of Chicago. Mary Poppins with a sexier haircut rivaling Catherine Zeta Jones and dare I say, showing some leg? The “A Cover Is Not the Book” scene is one that really made me scratch my head. Did Mary Poppins just shimmy her shoulders? Did they just sing about a girl in the nude? Did they just do this whole scene just to give Lin-Manuel a rapping moment?

Perhaps Disney was giving a nod to the Mary Poppins books – but this is not the Disney-fied Mary Poppins that I grew up with. The Mary Poppins I knew would have never entertained a song about a naked girl or a moment to shimmy and throw some leg into the spotlight. And since we are playing this off as a sequel and NOT a remake – I believe it was a scene that would have made Julie Andrews cringe. I was cringing for her. And I worry that THIS scene will define who Mary Poppins is in 2018 for our kids – more than the 100s of other delightful and beautiful scenes throughout the film. 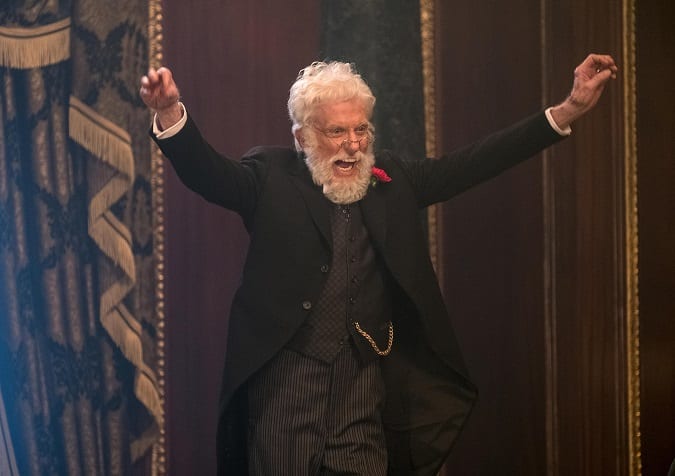 Already nominated for Best Musical/Comedy, there’s no arguing that Mary Poppins Returns is a delightful and cheerful way to end 2018. Fond memories of the past, bright hope for the future, and a happily ever after, it’s a twisting tale that bridges together generations of Mary Poppins lovers, with a tearful moments, whimsical imaginations and play time for both kids and adults. From the mannerisms to the story to the amazing musical production of catchy tunes and show stopping dancing, Mary Poppins Returns is “almost” practically perfect – and the happy “period” that this world needs on the end of a 2018 movie year.

But I will say that I was 95% into this movie. That one scene really had me questioning the direction of the film and the preservation of the Disney legacy that is Mary Poppins. Everything else was practically perfect in every way. I loved Emily’s Blunt portrayal – spot on. I loved Lin-Manuel Miranda’s new Lamplighter role – an iconic part he was born to play. The costumes, the singing, the dancing, the animation, the cameos – it was all wonderfully displayed in a way that only Disney can produce.

But that one scene, it won’t leave my head. And that one scene has me wondering if the rest of the world will embrace this side of Mary Poppins or be cringing along with me.

Hopefully this Mary Poppins Returns Movie Review | Safe for Kids? will help put your minds at ease regarding whether this movie is ok for your children to see. It is “almost” practically perfect in every way. But let’s be honest – can anything really compare to the original?

Mary Poppins Returns flies into theaters on December 19, 2018. Are you planning to take your family on a whimsical adventure?

Looking for more parent movie reviews like Mary Poppins Returns Movie Review | Safe for Kids? Check out these popular ones: