Confession, I was counting down the minutes to see this one. Chris Evans in all of his glory for me to watch. I know, not so family-focused. But hey, a mommy can dream 🙂 The comic book hype is back with the new Captain America: The Winter Soldier, in theaters today April 4, 2014!

After the cataclysmic events in New York with The Avengers, Marvel’s “Captain America: The Winter Soldier” finds Steve Rogers, aka Captain America, living quietly in Washington, D.C. and trying to adjust to the modern world. But when a S.H.I.E.L.D. colleague comes under attack, Steve becomes embroiled in a web of intrigue that threatens to put the world at risk. Joining forces with Natasha Romanoff aka Black Widow, Captain America struggles to expose the ever-widening conspiracy while fighting off assailants sent to silence him at every turn. When the full scope of the villainous plot is revealed, Captain America and the Black Widow enlist the help of a new ally, the Falcon. However, they soon find themselves up against an unexpected and formidable enemy—the Winter Soldier.

There’s usually big letdowns associated with sequels. Who wants to spoil the action in the first Captain America film? But in all seriousness, this one was NOT one of those. The action was amped up at least by 10 for this film. And with lots of action comes lots of amazing fight sequences, graphics and effects. 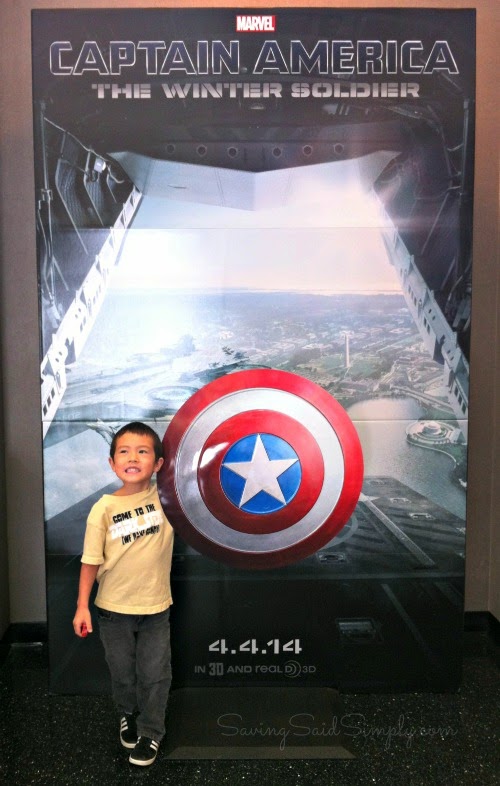 Don’t worry, I didn’t bring my little guy to see this one, but he was so excited!

Is Captain America: The Winter Solider safe for kids though? Nope. There’s lots of human violence in this one, as with many bloody sequences, use of weapons (such as guns) and scary fighting that would not be appropriate for little ones.
Recovery for me came quickly as I focused in on Chris Evans. The All-American did not disappoint. Delving deeper into his past, his emotions and his personal struggles, you realize that Captain America is more than a good man and super hero. He really poses as a great role model for all men. I’d have to watch again to confirm, but I love that Captain America only uses his hands and shield in the fight sequences, and more for defense than really attacking folks. Shows his true character and desire to protect and serve.

The plot came fast and furious and those with a knowledgeable comic book background will not be disappointed. You’ll find some crossovers between the Avengers and Captain America characters. Falcon was definitely one of my favorite new characters as well as some surprising moments with Black Widow and Nick Fury.

Definitely don’t want to spoil anything, but you will see the reveal of who The Winter Soldier is, and they’ve already planned for the next sequel to release in 2016. Be sure to stay until the VERY end. There’s 2 end credit scenes and one had EVERYONE in the audience clapping 🙂