Is Amy Schumer’s latest comedy film ok for kids to see? Check out this I Feel Pretty Movie Review | Safe for Kids? for detailed parent look at the story, message, rating & more. #FeelPretty 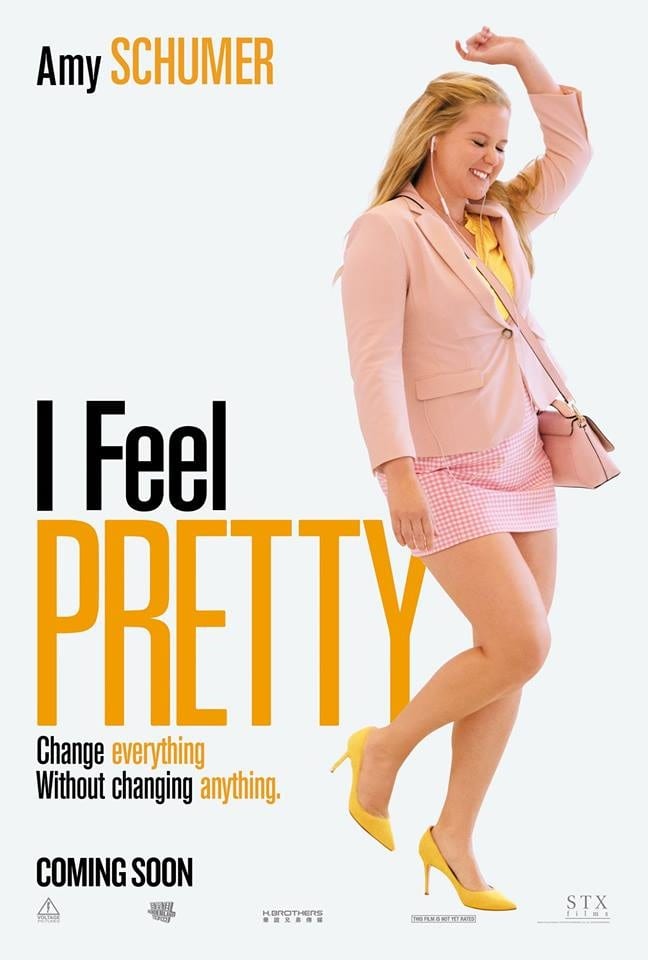 All photos courtesy of STX Entertainment

Self-acceptance, breaking through stereotypes, and looking beyond skin deep – before even setting foot in a theater, we all should be applauding Amy Schumer for her efforts to address these issues in today’s society. Empowering girls and young women with a positive outlook served with a side of humor, this I Feel Pretty Movie Review | Safe for Kids? addresses whether or not your girls will leave the theater feeling 100% confident in their own skin – or if we leave cringing. Does Amy Schumer make her point? Does the humor deliver? And what about that PG-13 rating for I Feel Pretty? 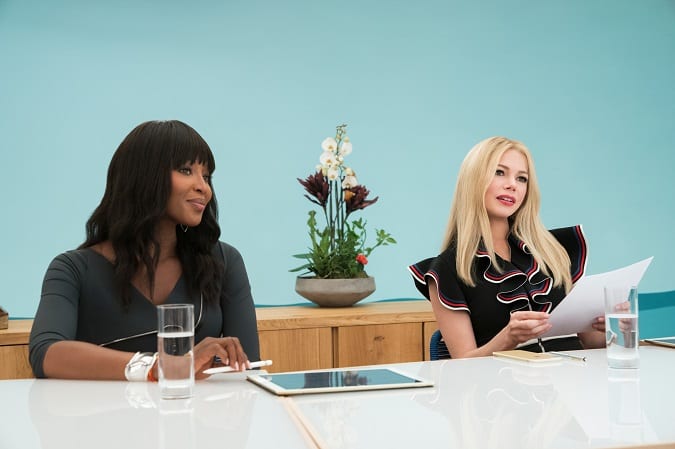 This is the first time in a long time where I am having troubles addressing the visual aspect of the film – because it’s not heavily CGI or animation based movie review. The realness of the shots, the vibrant colors that Amy Schumer wears, the fact that you can see belly fat, cellulite and Spanx really aids to the message that she is portraying in this film. Contrasting that to the beautiful and thin models who are placed next to Amy Schumer’s character give an uncomfortable screenshot of the world that we live in. But again, I appreciated being uncomfortable. Not everything or everyone is airbrushed and Photoshop-ed in life. Nor should this movie show it. Lots of strong women actresses are supporting this film including Busy Phillips, Michelle Williams, and Aidy Bryant. That was also refreshing to see. 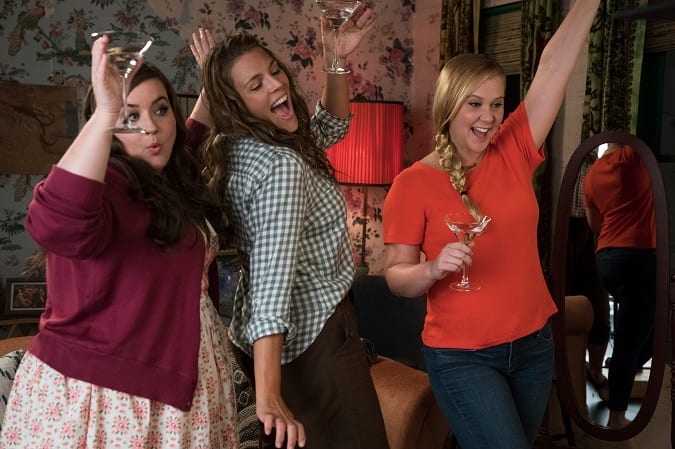 Meet the Fockers + 13 Going on 30 + the 40 Year Old Virgin – this is how I would describe this story. Awkward – Amy Schumer believes that she is 100% confident and beautiful after a serious head injury, but no one sees those changes except her. The whole plot line is already on the web. No surprises there. There’s a lot of highly visual and physical humor – hair ripped out, nether regions getting injured. Basically a lot of moments where you are uncomfortably laughing, cringing, and crossing your legs at the same time. But those sweet sentiments of self-acceptance, confidence, beauty beyond skin deep – that’s where the story got murky for me. I think that I was so uncomfortable with the over the top physical comedy, that the line between what was meant to be serious and what was meant to be sarcastic got confusing. Was Amy Schumer making fun of herself or using her comedy as a way to connect with people on a deep level? 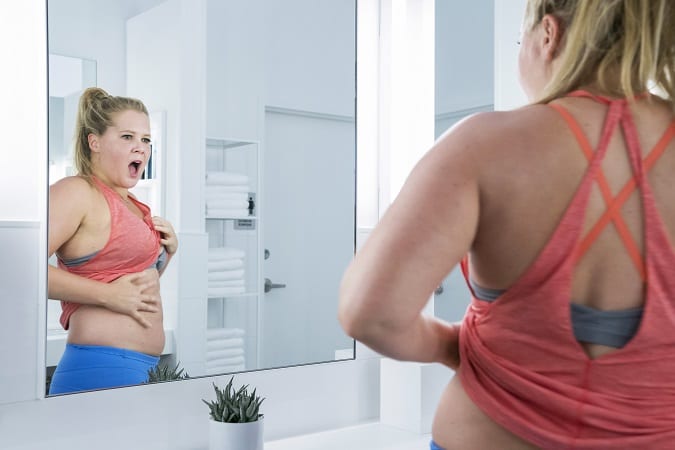 If I were going into this movie NOT knowing the kind of comedy that Amy Schumer had done, I would have said that the PG-13 rating was pretty spot on.

Violence. Thankfully nothing too harsh for kids.

Language. I will say that the language was pretty tame for what I expected – I counted about a total of 5-6 swear words.

Adult themes. There were overt adult themes here. Sexual content, nudity, language and some graphic descriptions of some of the physical comedy (see above) really played into the rating. But the nudity and scene in bed would have me blushing in front of my kids. I am 100% confident (thanks, Amy) that my 9-year old and 5-year old will NOT be seeing this movie now or in 10 years. I cannot recommend this movie for kids or even teens – because of the story confusion. I think that our kids, highly sensitive to the issues of confidence, beauty, stereotypes and body shaming would only intensify those feelings after watching this film. Without having a full grasp of identity before walking into this film, I think our kids would walk away with even more questions. 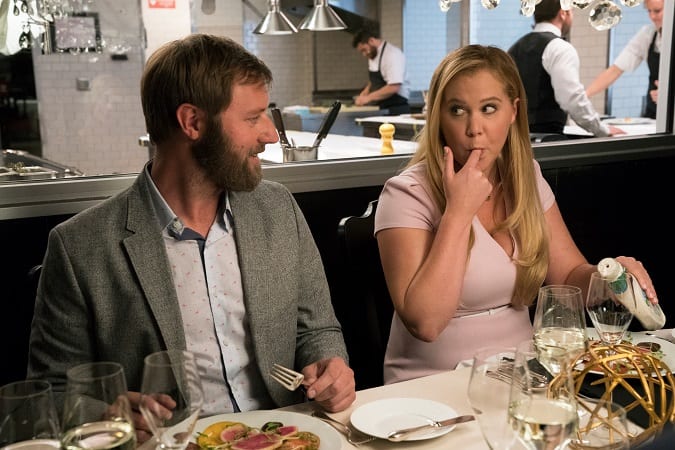 That all aside, I tried to picture who would appreciate this film. Obviously those Amy Schumer fans will really appreciate the depth of physical comedy and her actress capabilities in this film. She really did push her limits. I think she did touch on those strong empowering women points that really need to be talked about and changed. If I had to pick the audience for this film, it would really be moms, those looking for a reprieve from everyday life, needing a chick flick and friends to reconnect, have a few laughs and walk away feeling entertained.

Can I just say that Michelle Williams’ performance in this film (especially after seeing her in The Greatest Showman), just proves how versatile this actress is. She was easily my favorite supporting character in this film. The dress with the dogs and the roses – AH-mazing!

But at the end of the day, I walked out of the theater not feeling confident that I Feel Pretty is going to win any awards and produce really big societal changes. I left feeling awkward – unsure if I am the person that needs the confidence or needs to give more confidence. And I know that Amy Schumer is already feeling the heat from this film – and it’s not even out yet.

So I think the biggest takeaway from I Feel Pretty is how Amy Schumer is going to keep reacting to all of the heated press she’s receiving in the coming months. And right now I am 100% behind the message she is continuing to hit home. Confidence is real. Beauty is so much more than a flat stomach and a pretty face. Loving ourselves doesn’t happen enough – and it should. Did the acting reflect that? Not all of the time. But I applaud strong women strongly driving home a positive outlook on life. And I am applauding Amy Schumer on using her talents to encourage uncomfortable yet confident changes.

I Feel Pretty is directed by Marc Silverman and Abby Kohn and is distributed by STX Entertainment. Get a look at the I Feel Pretty trailer to get a feel on this new Amy Schumer film.

Be confident, be bold, be you. I Feel Pretty is in theaters this Friday, April 20.

Will you be seeing Amy Schumer, Michelle Williams, Busy Phillips, Aidy Bryant and more in I Feel Pretty, open in theaters this Friday April 20, 2018?

I was invited to attend an advanced screening of I Feel Pretty on behalf of STX Entertainment for this I Feel Pretty Movie Review | Safe for Kids. All opinions are my own. Be sure to follow Raising Whasians via Facebook, Twitter, Instagram, Pinterest and YouTube for more parent movie reviews, movie updates and entertainment news!