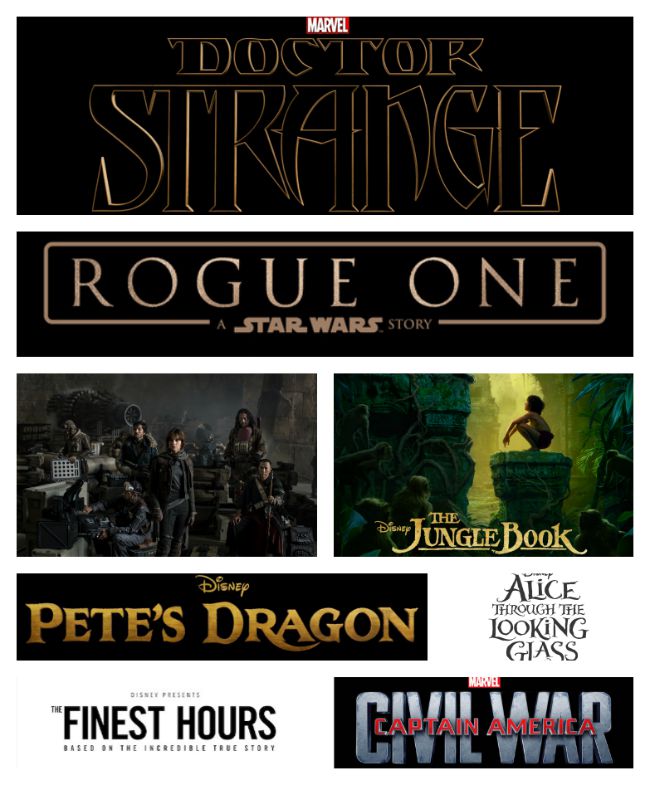 Or my official title of this post “Chris, Chris, Han and Jack Sparrow walk into the D23 Expo.” Sounds like the beginning of something good, right? That’s because it IS! So this is the portion of the D23 Expo recap where I throw in a pun-y title. What can I say, I’m a little punchy after a few days of little sleep. But the Marvel, Lucasfilm & Disney Live Action Film Reveals presentation was easily one of the BEST of the whole 2015 D23 Expo. A whopping 14 films were presented and I couldn’t think of a better team than a Chris, a Chris, a Han & a Jack Sparrow to take the stage. We are talking Worlds, Galaxies and Universes today as we all , , professionally walk through this amazing Marvel, Lucasfilm & Disney Live Action Movie Recap together, shall we? Be prepared for a plethora of pics…because I love you. 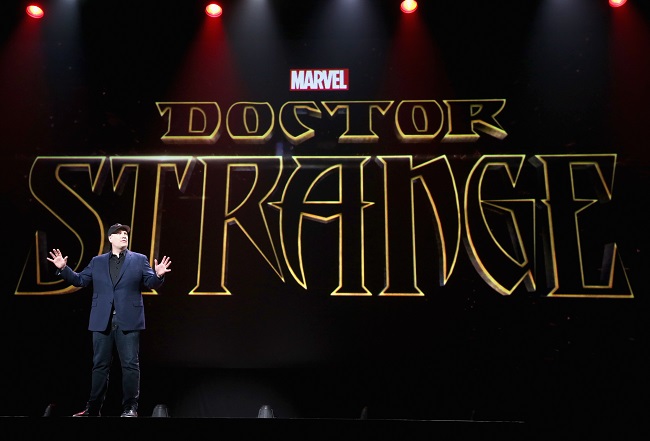 All photos courtesy of Disney

The presentation started off with a bang, with Marvel gracing the stage first. Kevin Feige, a Marvel genius in his own right introduces Dr. Strange. Then the overly handsome and dashing Benedict Cumberbatch giving us a special D23 video just for us. Swoon! A pre-production teaser including the drawings for the film were put to some serious music. And yes, I did see an epic red cape. 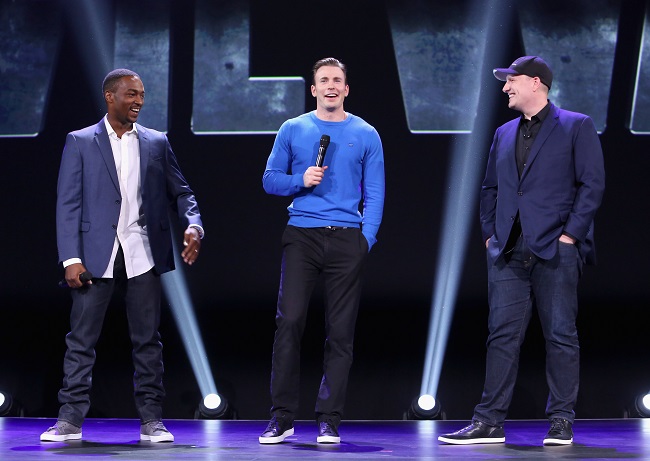 Hellllllllloooooo, Chris Evans! Looking all amazing in his very tight blue long sleeved tee, this guy was a sight to see. Flown in from Germany alongside Anthony Mackie for a special D23 Expo hello, I could have just stared and stared and stared all day. But new intense footage and probably my favorite line of the entire presentation were blown up on the big screen as we got an amazing first glimpse of exciting Civil War footage.

“Sometimes I want to punch you in your perfect teeth.” Tony Stark #Marvel #D23Expo #CivilWar

Bahaha. Love it. Bucky was in quite a few of the shots. Yes, there was a memory return and a touching moment between him and the el Capitan. Bring tissues. Explosions, destruction and one-liners, yup they’re all here. 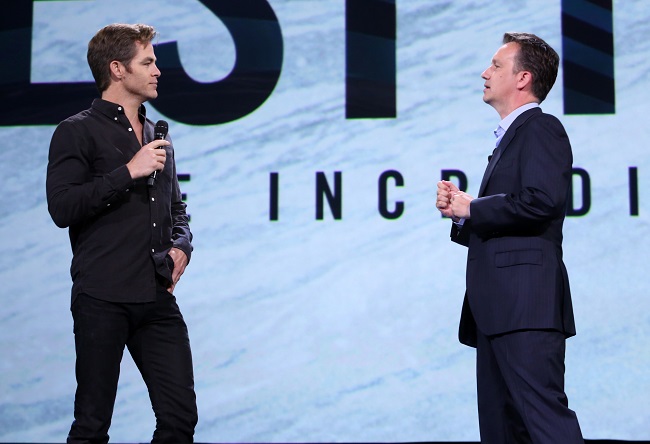 Insert Chris #2 of the presentation as we drift into the Disney section of the live action films presentation. (Drift…boats, get it? The jokes only get better here!) A very handsome Chris Pine took to the stage to introduce some of the new footage of The Finest Hours. I always get sucked into the “based on a true story” kind of films. Lump in the throat, gut wrenching, teary eyed kind of love there. And the cinematography, really amazing.


Feel the intensity of a true story brought to life as you watch The Finest Hours latest trailer. And be prepared to start 2016 off with a wave of surprises on January 29, 2016. 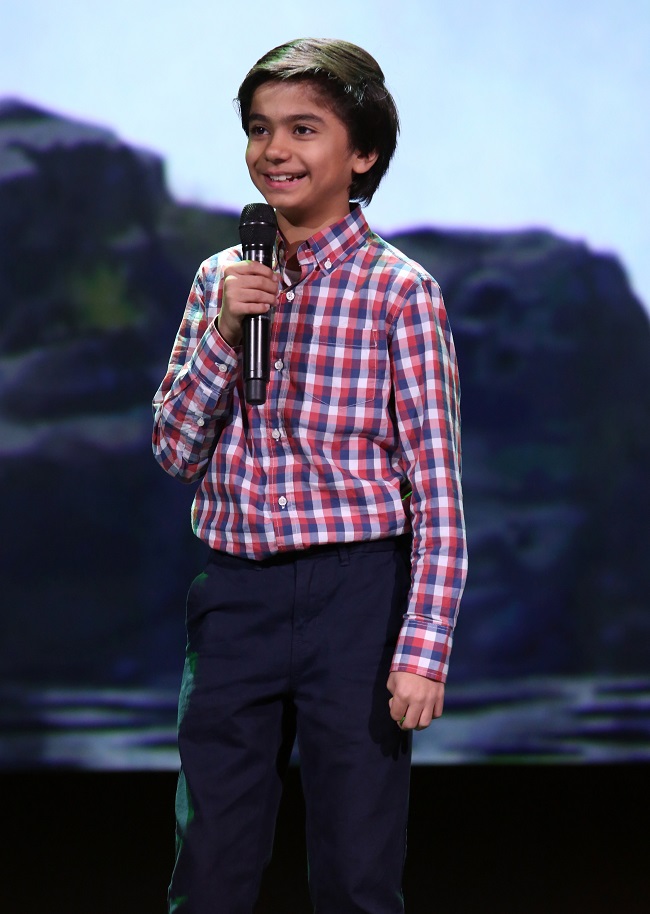 The cutest little boy comes on the stage as he basically says hi to the biggest audience of his life. Pinch his cheeks, Neel Sethi is adorable. Joined by Lupita Nyong’o and Ben Kingsley, this rising star is in good company. Director Jon Favreau joins them on stage for a beautiful display of color, sound and vision that is the reimagined The Jungle Book movie. And if it’s anything like the few moments on screen, the imagery alone is worth the watch. And the scene of Baloo (aka Bill Murray) humming Bare Necessities? Priceless. Save the date of April 15, 2016. 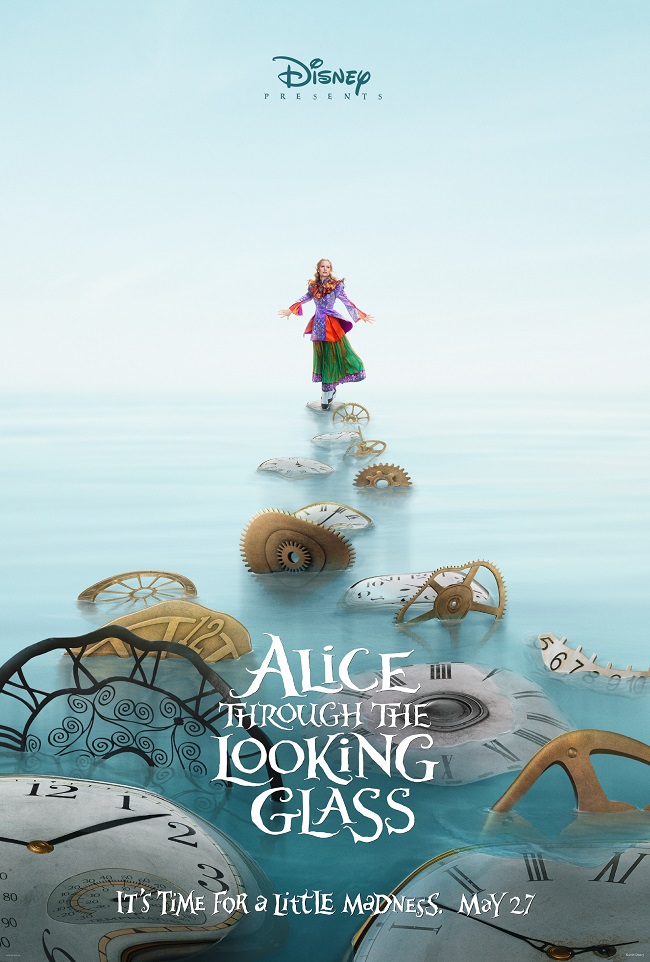 5. Alice Through the Looking Glass

Mia Wasikowska opens for the all-new Alice Through the Looking Glass movie. Alice returns to the whimsical world of Underland and travels back in time to save the Mad Hatter. The film, which once again features Johnny Depp, Anne Hathaway, Helena Bonham Carter and the voices of Alan Rickman, Stephen Fry, Michael Sheen and Timothy Spall, introduces several new characters as well: Zanik Hightopp (Rhys Ifans), the Mad Hatter’s father, and Time himself (Sacha Baron Cohen), a peculiar creature who is part human, part clock. I was glad to see Tim Burton back on board this film as well. I creepily enjoyed getting my own taste of the film in highly technology advanced photo booths at D23 Expo too. Opens May 27, 2016. 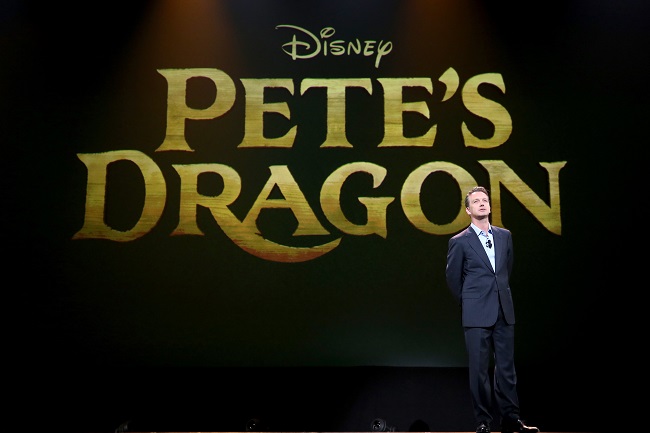 Bryce Dallas Howard joined Bailey on stage to talk about her starring role in “Pete’s Dragon,” a reimagining of Disney’s cherished family film. The heartwarming adventure of an orphaned boy named Pete and his best friend Elliott, who just so happens to be a dragon, “Pete’s Dragon” is directed by David Lowery, produced by Jim Whitaker, and executive-produced by Barrie Osborne, and also stars Oakes Fegley, Wes Bentley, Karl Urban, Oona Laurence and Robert Redford. Rare footage was shown, with a small boy’s hand moving up a scaly back. #Yes. “Pete’s Dragon” opens in U.S. theaters on August 12, 2016. 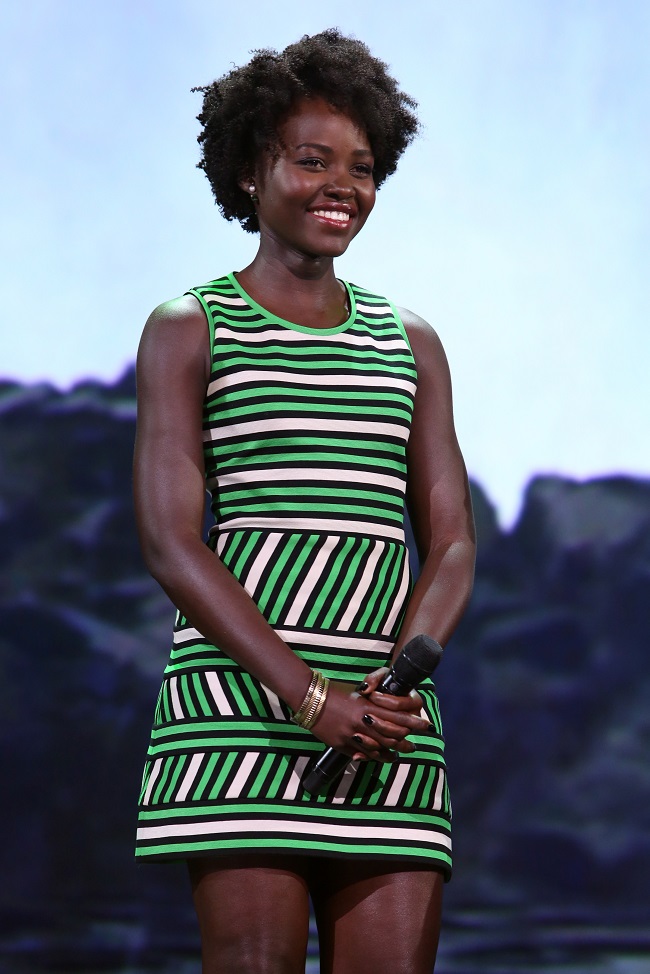 Lupita returns to the stage (I was surprised it was the same dress!) to introduce the crowd to the upcoming film “Queen of Katwe,” which is based on the inspirational true story of a girl from the poverty-stricken slums of rural Uganda who dreams of becoming a champion chess player. Sounds like another ESPN inspired underdog story. And I LOVE that the winner is a girl! 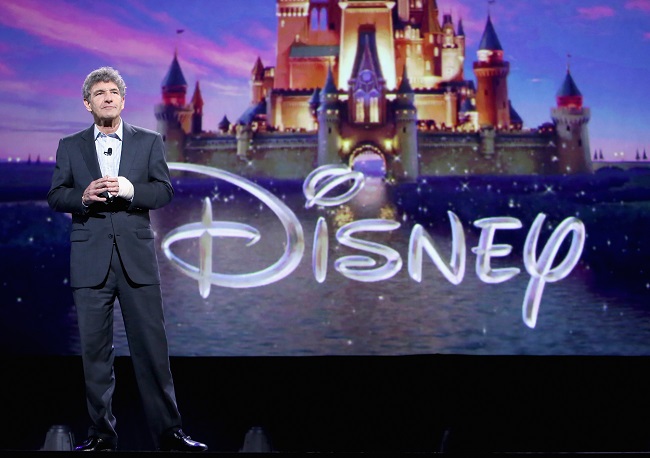 One of THE most anticipated films of the expo definitely gave everyone a run for their money. A video greeting from the beautiful Emma Watson and a MUSICAL melody of Gaston sung by Josh Gad and Luke Evans definitely had folks cheering for the return of the Beauty and the Beast songs. Wish you could Be Our Guest there (snicker)! They sadly didn’t give us photos of the presentation. Alan Menken, who won two Academy Awards® (Best Original Score and Best Song) for the animated classic, provides the score, which will include new recordings of the original songs written by Menken and Tim Rice, as well as several new songs. “Beauty and the Beast” will be released in U.S. theaters on March 17, 2017. 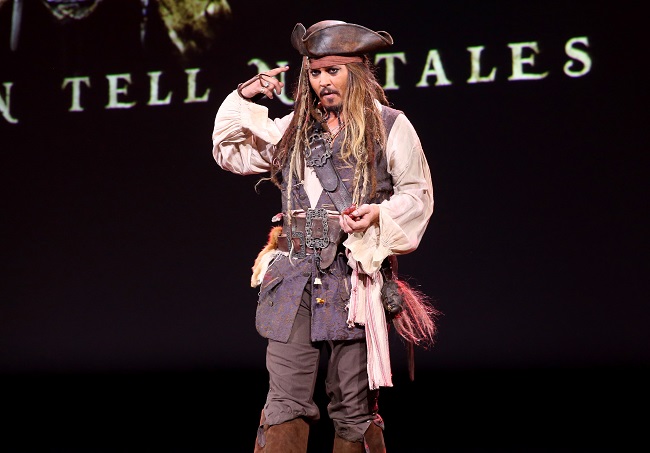 9. Pirates of the Caribbean: Dead Men Tell No Tales

Wondering where the Jack Sparrow of the title comes in? That would be here. In full garb as a surprise for fans (because everyone knew he was at D23 already) and full character, Captain Jack Sparrow wanders the stage eating and throwing grapes at the audience. No lie. Grapes. But no scream could be bigger than mine at the announcement of the return of Orlando Bloom (aka Will Turner) to the film. Thrust into an all-new adventure, a down-on-his-luck Captain Jack Sparrow finds the winds of ill-fortune blowing even more strongly when deadly ghost pirates led by his old nemesis, the terrifying Captain Salazar (Bardem), escape from the Devil’s Triangle, determined to kill every pirate at sea…including him.  Captain Jack’s only hope of survival lies in seeking out the legendary Trident of Poseidon, a powerful artifact that bestows upon its possessor total control over the seas. Captain Barbossa also returns to the film, making this a definitely powerful cast driven movie. Savvy? 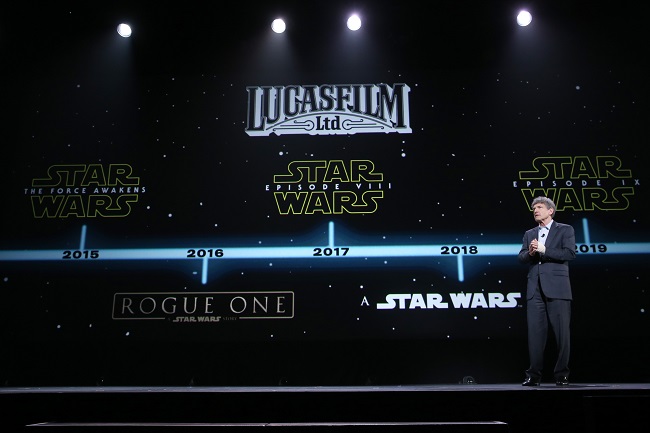 And then in a galaxy far, far away the Star Wars news imploded like the Death Star in Episode I. Here we go. 5 of them.

Alan Horn took to the stage and briefly touched on the new Episode VIII movie. Rian Johnson will be directing the film slated for release on May 26, 2017.

Then BOOM in a surprise announcement, Horn informed everyone that Colin Trevorrow (“Jurassic World”) has signed on to direct “Star Wars: Episode IX,” which is scheduled for release in 2019.

A new Star Wars series? Yes, there’s that too. “Untitled Han Solo” stand-alone film, slated for release on May 25, 2018 will be directed by Christopher Miller & Phil Lord, with Lawrence Kasdan and his son Jon Kasdan writing the screenplay. 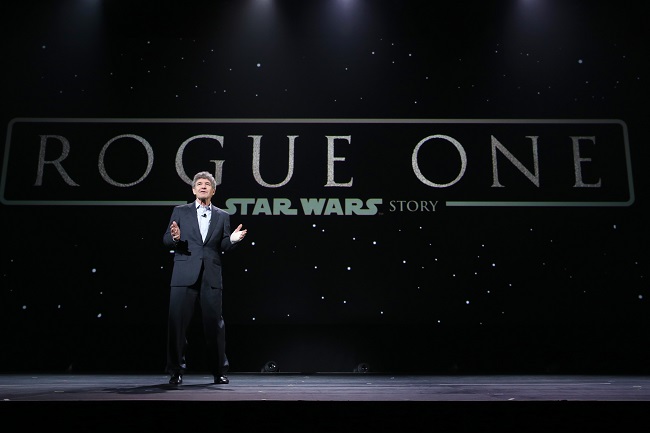 Horn then took the audience by surprise, announcing the cast for “Rogue One,” the first of the standalone Star Wars stories to hit the big screen, which has commenced principal photography. Gareth Edwards (“Godzilla,” “Monsters”) is directing “Rogue One,” which tells the story of resistance fighters who have united to steal plans to the dreaded Death Star.

The filmmakers have assembled a stellar cast, including Felicity Jones, nominated for an Academy Award® for her leading role in “The Theory of Everything”; Diego Luna, who was featured in 2008’s Oscar®-winning “Milk” and the critically acclaimed “Killing Them Softly”; Ben Mendelsohn, recently nominated for an Emmy® for his leading role in “Bloodline” and co-starring  in the upcoming “Mississippi Grind”; Donnie Yen, Hong Kong action star and martial artist who starred in “Ip Man” and “Blade II”; Jiang Wen, who co-wrote, produced , directed and starred in the award-winning “Let the Bullets Fly” and “Devils on the Doorstep”; Forest Whitaker, recently featured in the critically-acclaimed Lee Daniels’ “The Butler” and winner of an Academy Award® for his leading role in 2006’s “The Last King of Scotland; Mads Mikkelsen, who starred in “The Hunt” and was the memorable villain from 2006’s “Casino Royale”;  Alan Tudyk,  who plays a performance-capture character in “Rogue One,” stars in the soon-to-be-released “Con Man” series and “Trumbo,” which releases this November; and Riz Ahmed, who was recently featured in “Nightcrawler” and starred in the BAFTA-winning film “Four Lions.” 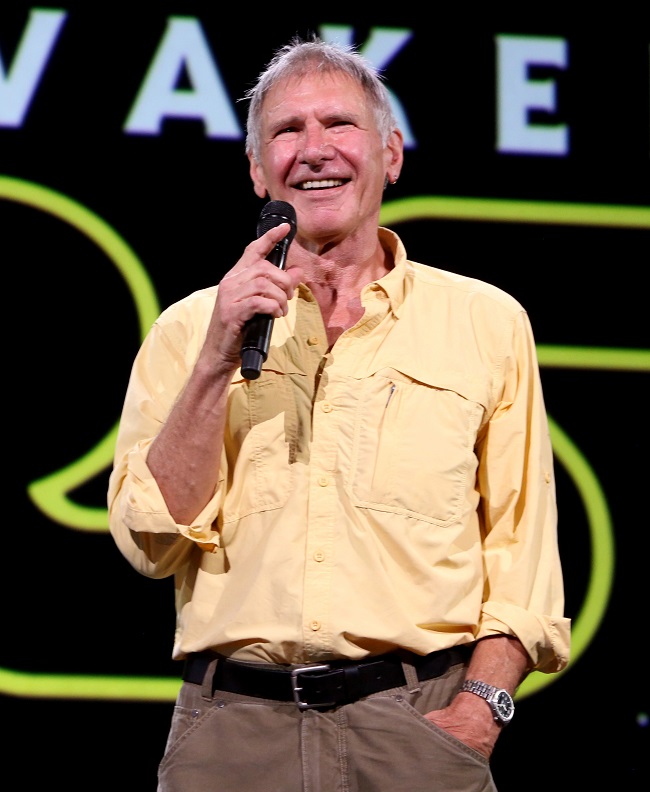 14. And oh yeah…that movie coming out this year. Star Wars: The Force Awakens

J.J. Abrams introduced stars John Boyega, Daisy Ridley, Oscar Isaac and Lupita Nyong’o (laughingly joking that Lupita is on stage for the umpteenth time!). Thunderous applause. Then they announce that we get commemorative posters to take home. Insert bigger applause. And just when you thought that would be enough, in walks in Harrison Ford. Dressed in a bright yellow button down and looking oh-so-good, this guy brings down the house. Oh to just give that man a hug. I cannot wait to see him, Mark Hamill and Carrie Fisher in Star Wars: Episode VII on December 18, 2015. 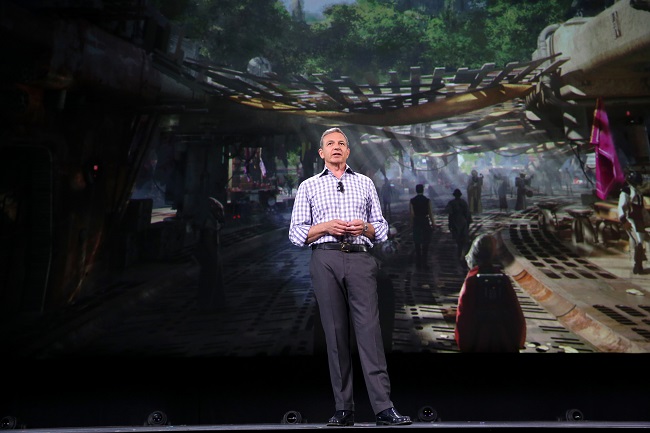 (see that picture behind him? That’s the Star Wars Land new cantina!)

Can’t get any better right? We’re all still swooning over the massive 14 film recap when by the way, they seemingly blurt out “Oh by the way…” the news of the building of Star Wars Land. I know. Minds were blown. Screaming ensued. Tears of joy streamed. And then everyone left on cloud 9 – or in this case Cloud City (Star Wars pun, sorry. I couldn’t help it. Punchy, I said.) 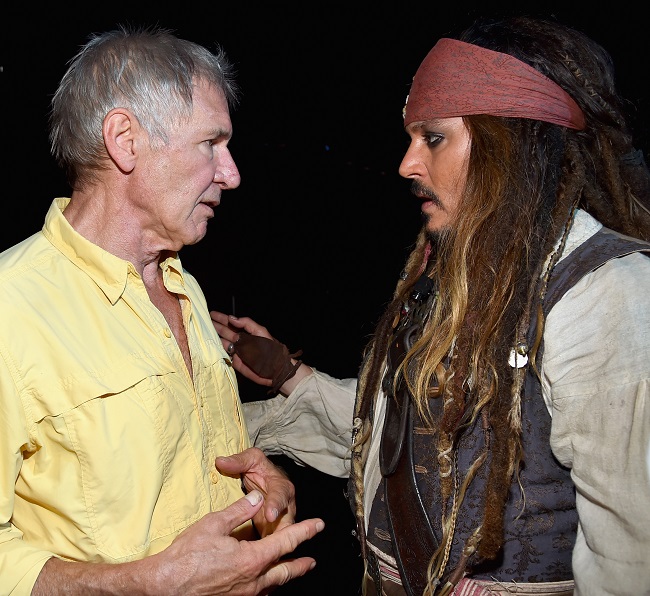 Best photo of the expo

Did you get all of that? Well, here’s a 3 minute video recap of the whole presentation.