I stepped aboard the Disney Cruise Line Ship, the Disney Magic to bring you Why Disney Magic’s Tangled: The Musical is a Must See. This magical post is sponsored by Disney. All opinions are my own

Why Disney Magic’s Tangled: The Musical is a Must See

And at last I see the light….no seriously, I saw it. If you were to ask me which Disney movie I love belting at the top of my lungs, it would have to be Tangled. I am just in love with the story, the singing, the humor….this movie just gets me. And then Disney Cruise Line Introduces Tangled: The Musical for the first time in Orlando/Port Canaveral, and my chorus girl heart skips a beat. A Tangled live stage production, right here in my hometown. You can guess how long it took for me to say yes to the sneak peek media preview (3.5 seconds to be exact).

So this past week, I walked onto a Disney Cruise Ship. A mixture of mommy guilt (no kids in tow!) and nostalgia (has it seriously been 4 months since our Disney Cruise?), the Disney Magic brought back all sorts of wonderful family memories as I took my seat in the theater. Disney Magic’s Tangled: The Musical is the ship’s newest and exclusive live theater production of the beloved Disney movie brought to life….and I never expected to cry big ugly tears. But I did. Why is Disney Magic’s Tangled: The Musical a MUST see? Grab tissues, lots of tissues. 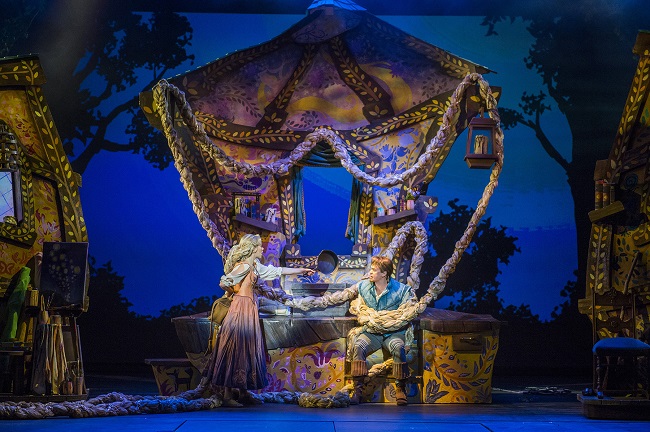 Disney’s creative team really went to work on the script for this live production. Reworking the story line, the characters and the music for cruise ship theatrics was certainly no easy feat. But to see the whole story unfold from screen to stage was nothing less than breathtaking. Not skipping a beat or leaving a huge plot hole, I was impressed how Tangled: The Musical seamlessly flowed the story to keep the core of the movie true to the stage. 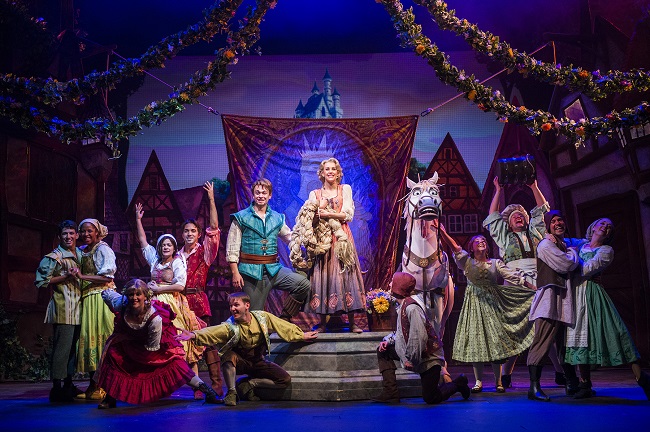 How do you make the iconic Rapunzel tower appear so high? How do you create the majestic kingdom of Corona? How do you flow the story into the rough confines of the Snuggle Duckling? The set designs for Tangled: The Musical were among some of the most impressive that I have ever seen on stage, and definitely became the foundation of this live stage show. I found my child-like awe as scenery moved around the stage, weaving story and songs throughout. 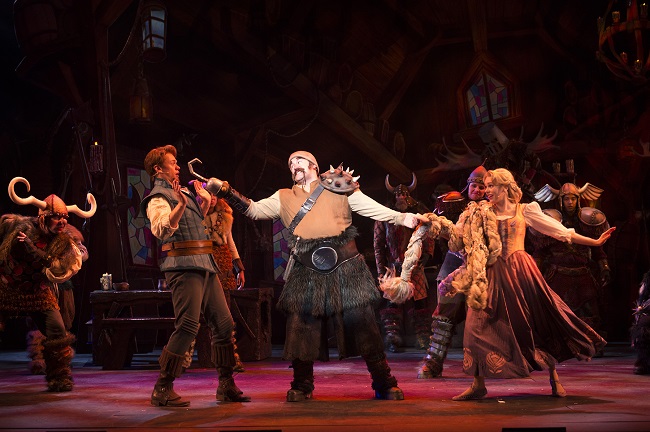 I had to constantly remind myself that I was watching a live show. More than once I found myself shocked with Rapunzel’s singing or Gothel’s evil voice or the even the mannerism of Flynn on stage, and how PERFECTLY matched they were to the movie. Disney couldn’t have casted a better crew for this musical production. I was truly honored to see such talented performers deliver such an amazing show. 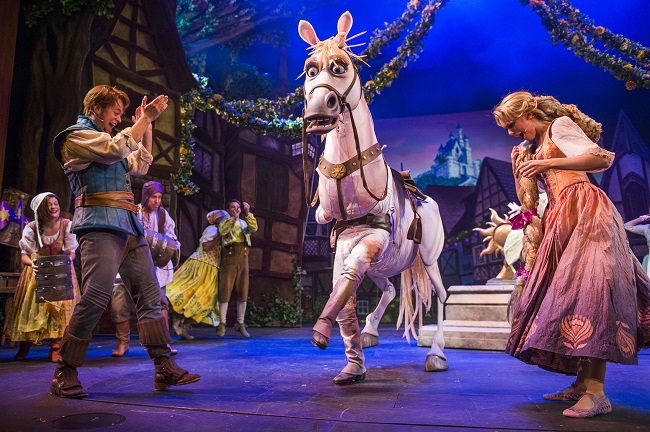 Who are the supporting actors in this show? It’s Disney to the nth degree. Costuming with Disney precision to the film (down to the thug’s goiter and his nose!), props that seem to come out of the film right onto the stage, and the main spectacle of the show, Maximus himself. Using the latest in puppetry technology, this horse is just as life-like on stage as in the movie. Ah-mazing! 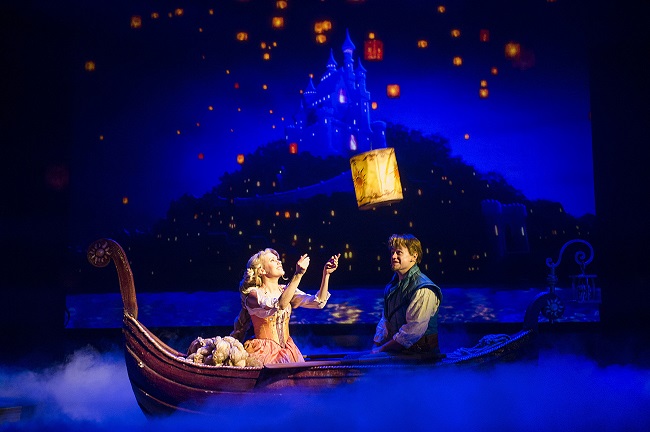 Alan Menken has done it again. As if Tangled: The Musical couldn’t have been better adapted to the stage, you throw in a wrench like Alan Menken to the team and you get 3 all-new songs. And if you’re sitting there a bit skeptical already, I admit, I was too. How could you perfect a soundtrack of one of my favorite Disney movies? You add Alan Menken. Blending new songs seamlessly into the story, it was as if they were always there.

“Flower of Gold” – WOW. This was the opening song of the whole musical. What a risk for Disney and what an amazing opening.

“Wanted Man” – A song dedicated to Flynn Rider? You know, it’s going to be good.

“When the Princess Returns” – the square of the Kingdom of Corona is transformed in honor of the princess and the annual lantern release. This song dives deeper into the heart of the kingdom and their missing princess.

But don’t worry, folks. All of your family’s favorite tunes are still there. “When Will My Life Begin?”, “I’ve Got a Dream,” Yes, including “I See the Light.” I had to keep my belting down to whisper level to avoid getting thrown overboard. 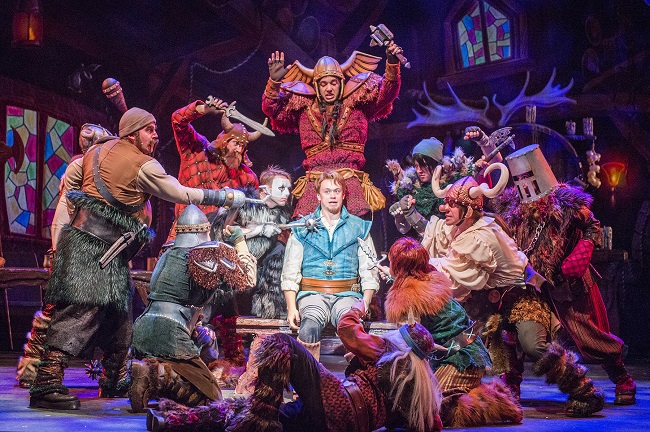 I went in a Tangled master…or so I thought. I came out 60 minutes later a Tangled novice. Tangled: The Musical made me see the light and the beloved Disney tale in a whole new….well, light. It was a Disney movie brought to life in a whole new experience, and I loved every single minute. I knew how the story would end and yet I still cried the big ugly tears. It was THAT moving. 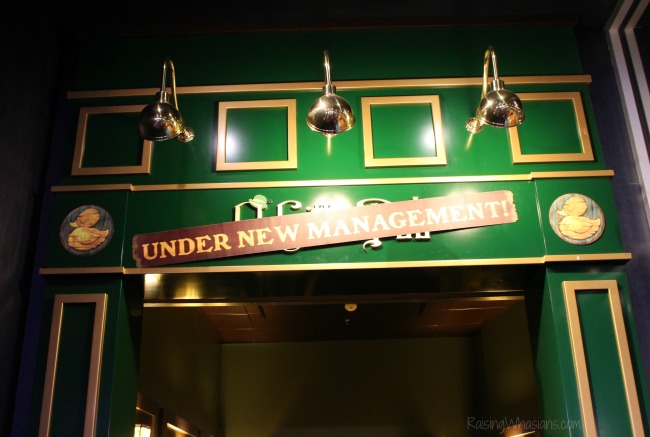 By the way, cruisers aboard the Disney magic are in for a treat! The O’Gills Nightclub gets transformed into the Snuggly Duckling for the night that Tangled: The Musical is performed. How cool is that? So you can grab some brew with the ruffians! 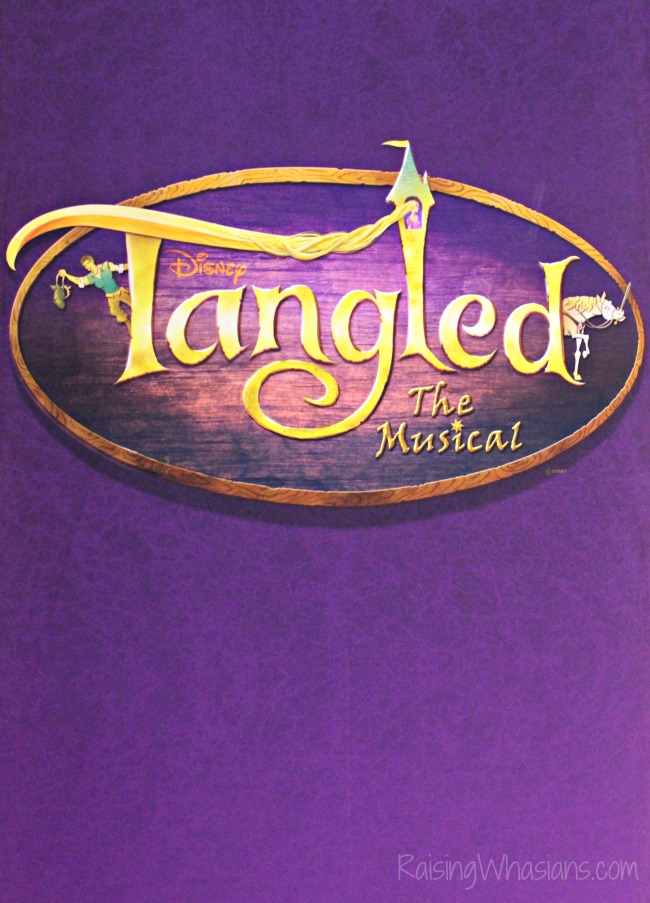 And because I’m a complete Disney nerd, I was loving these fun facts released by Disney Cruise Line about Tangled: The Musical! Which one is your fave? 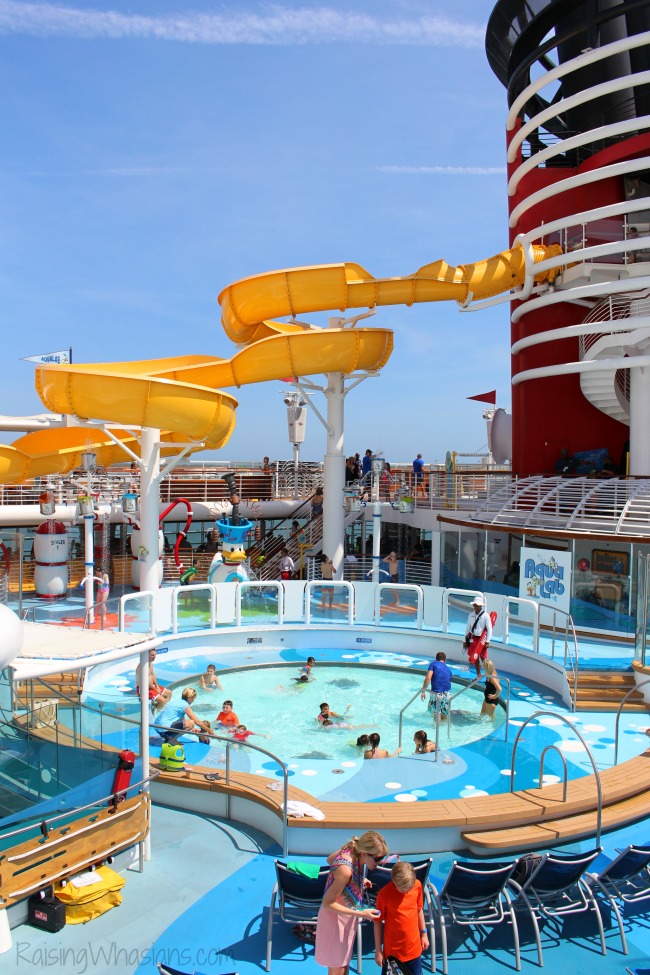 Coming back onto dry land….well, I was a bit of a changed person (minus a bit of eye liner too). Already planning my next Disney cruise (hey, a mom can dream, right?) and singing yet another round of “I See the Light” on my car ride home, I was just in awe of the theatrics Disney goes through to ensure that every guest gets that “wow” experience. Tangled: The Musical delivered at a level beyond Broadway. It’s Disney in every possible way. I saw the light, and the world has somehow shifted. Tangled: The Musical is finally here in Orlando aboard the Disney Magic. Get more details on Tangled: The Musical and Disney Cruise Line HERE. And be sure to check out my family’s first Disney Cruise experience including Disney Cruise Tips too. 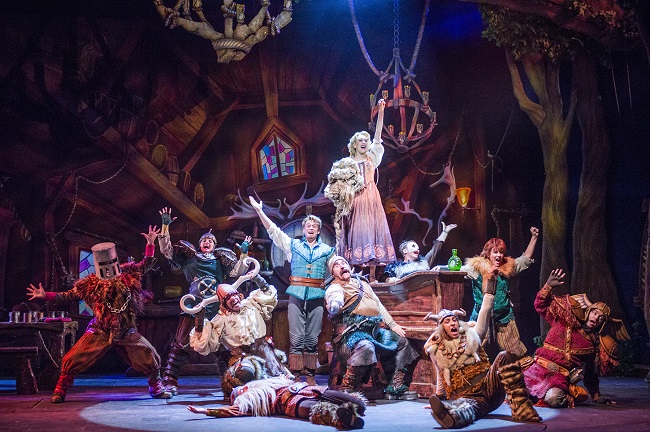 Have you seen Tangled: The Musical? Did you love it as much as I did?

I was invited to attend a media event for Tangled: The Musical aboard the Disney Cruise Line ship, Disney Magic in exchange for this posting. All opinions (even the sobbing mess ones) are my own. Be sure to follow Raising Whasians via Facebook, Twitter, Instagram, Pinterest and YouTube for more Disney tips!