Come aboard the Disney Dream with me for this exclusive Disney Cruise Line’s Beauty and the Beast Show | Safe for Kids? Parent Review + Video. Is this new show ok for young kids? This post is sponsored by Disney Cruise Line. All magical opinions are my own 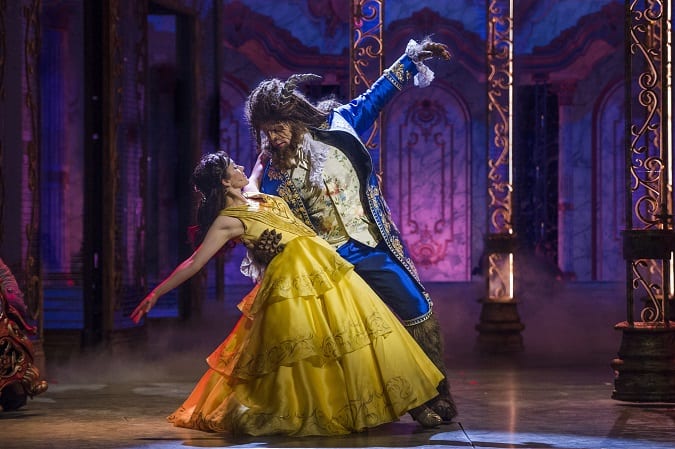 Something magical has come aboard the Disney Dream. The new Beauty and the Beast Show is officially a part of the Disney Cruise Line musical show line-up and is beginning to enchant audiences in their 1,340 seat theater. But does condensing a Tale as Old as Time, integrating new technology, casting new characters all while keeping things fresh really appeal to families, aka “will my kids be scared?” Check out my first look aboard the Disney Dream’s newest musical in this Disney Cruise Line’s Beauty and the Beast Show Parent Review, plus exclusive behind-the-scenes interview video with the creators of this new classic. This ain’t your average boat show.

Before we jump into my “parent thoughts on the new show,” it’s best to get a glimpse into the minds of the creators. What were they really thinking when it came to the challenge of bringing the Live-Action Beauty and the Beast to the Disney Cruise Line stage? I got to have a rare opportunity to interview the Director, Writer, Set Designer and Video Designer of the new Beauty and the Beast Stage Show. Would you believe that they had to get a script together before the movie was ever released? Get exclusive Disney fun facts, insider secrets & more with this special interview with Connor Gallagher, Sarah Wordsworth, Jason Sherwood and Aaron Rhyne. Just click play on the video above!

Ok, now onto the nitty-gritty, parents. Time to roll up the sleeves.

The stage show is approximately 1 hour and 15 minutes long, which by Disney Cruise show standards is a little bit on the longer side. (Disney Cruise Line’s original show Believe, for example, is 50 minutes long.) It’s challenging to condense a 2 hour+ movie! But just because it’s long doesn’t mean that it’s boring. The quickness of the story telling keeps the stage on a constant fluid movement – definitely entertaining for little ones as people and scenery are flying about the stage. Add in songs, dancing, stage effects, costuming and technology…enchanting entertainment abounds. But definitely keep the show length in mind when thinking about bringing kids that get easily antsy. 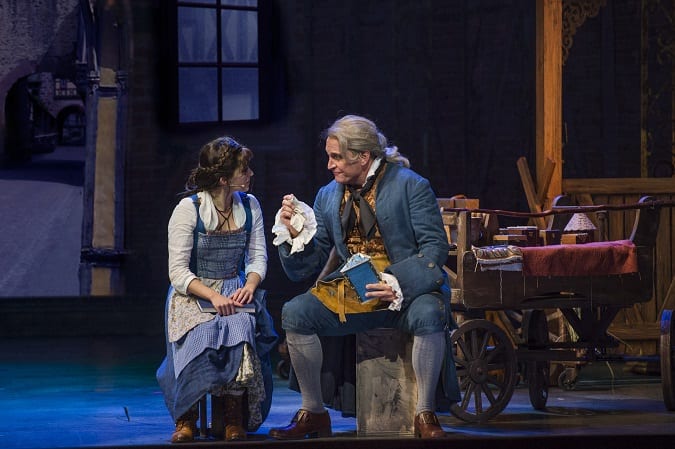 Based on the Live-Action Film, Not the Animated

If your family was looking for the animated version of the stage show, it’s not here. This show is based on the live-action Beauty and the Beast just released this spring of 2017. A different twist on the characters, the songs and the story, your family will notice that Disney really stepped up their live-action stage show game. But this could be confusing for kids thinking that they will be seeing the classic animated characters on stage. I highly recommend prepping them for this new classic before entering the theater. 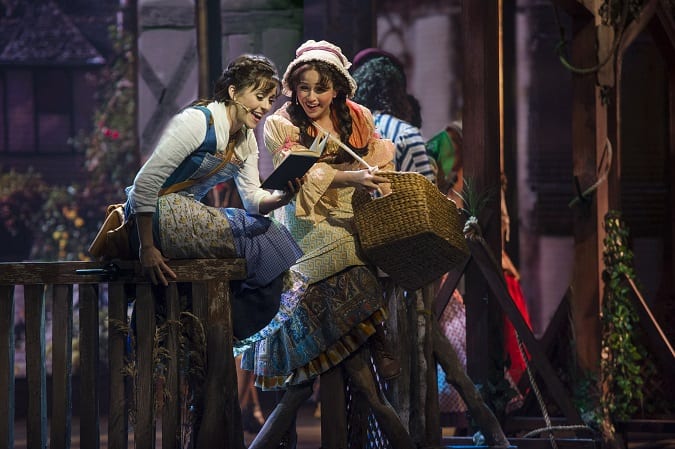 But with So Much MORE

Don’t believe that you know everything when it comes to the telling of the Beauty and the Beast story. Disney has a way of integrating so much more new material for the senses to discover – taking a moment such as Belle singing on the hill and creating one of the most fantastical highlights of the whole show. Clever scene changes, new technology and talent beyond words make this new musical a sight to see aboard the Disney Dream.

The set and video design for this musical are out of this world. LED walls are the featured highlight of the show as the story is told and contained inside of a “music box” setting. Super clever. As the scene changes the walls change with bright colors and stunning technology integrated throughout. Think video technology on steroids. The vivid imagery is a delightful add for kids as the stage comes to life.

Everything from the new movie gets a fresh new perspective on the stage, from the character personalities to the fantastic puppetry. 2 new songs from the live-action are included as well, reimagined for the stage. But don’t worry, the classic feel of Beauty and the Beast is still intact. Old songs with new twists (Be Our Guest was a surprise), new character lines (Go get ’em, Belle!) and an even more arrogant Gaston (is that even possible?) definitely knows how to keep audiences enchanted. 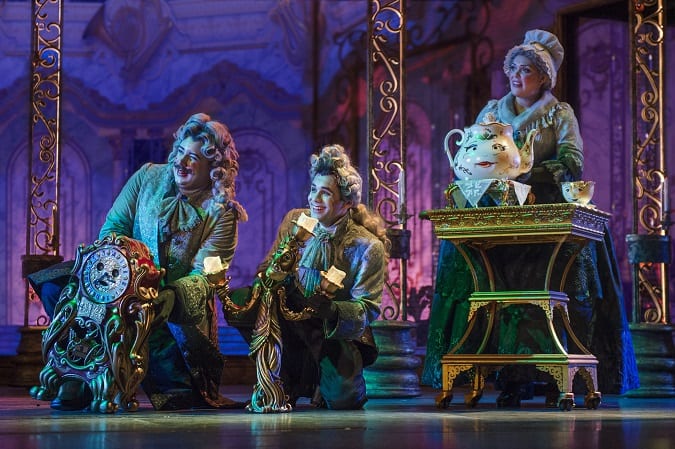 Disney has done it again with the perfect casting for this live stage show. The musical numbers are simply delightful, with a strong Belle character, a super suave Gaston and a rough Beast. But it’s not the main characters that steal the show. The Enchanted Objects have to be one of the most delightful sets of casting I have seen in a Disney musical. Your family’s eyes will dart back and forth between watching the puppets and watching the actors as they move, sing, act and use expert puppetry – it’s really a talent to see firsthand. 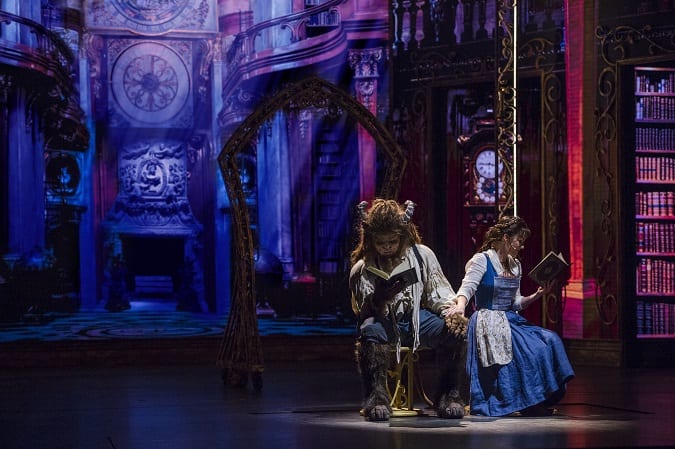 Will My Kids Be Scared?

The bigger picture here is whether you should take your whole family to see this stage show. Unlike other Disney Cruise Line shows, this one seems to be a bit “darker” in messaging compared to their other more upbeat shows. Here’s a few things to consider before bringing your kids:

In short, if your kids loved the new Live-Action Beauty and the Beast movie, they will absolutely adore the new stage show. However if you have more timid, anxious and easily-scared children, this may be a perfect time to drop your kids at the Disney’s Oceaneer Club or It’s a Small World Nursery for about an hour and a half instead. Not quite sure yet? I recommend sitting on an end row with your child in case you need a quick exit. I definitely will be bringing my 4-year old preschooler daughter and 9-year old son to see the new Beauty and the Beast show when we cruise on the Disney Dream in February. I can’t wait to see what they think!

This wasn’t my first time aboard the Disney Dream, and it certainly won’t be the last either. There’s a lot that goes into retelling a Tale as Old as Time, especially for a stage show unlike any other! Capture the beauty, the technology, the puppetry, the story and the FUN of the new Beauty and the Beast show, now aboard the Disney Cruise Line’s Dream.

Is your family excited for the new Beauty and the Beast show aboard the Disney Dream?

Check out these other Beauty and the Beast posts: 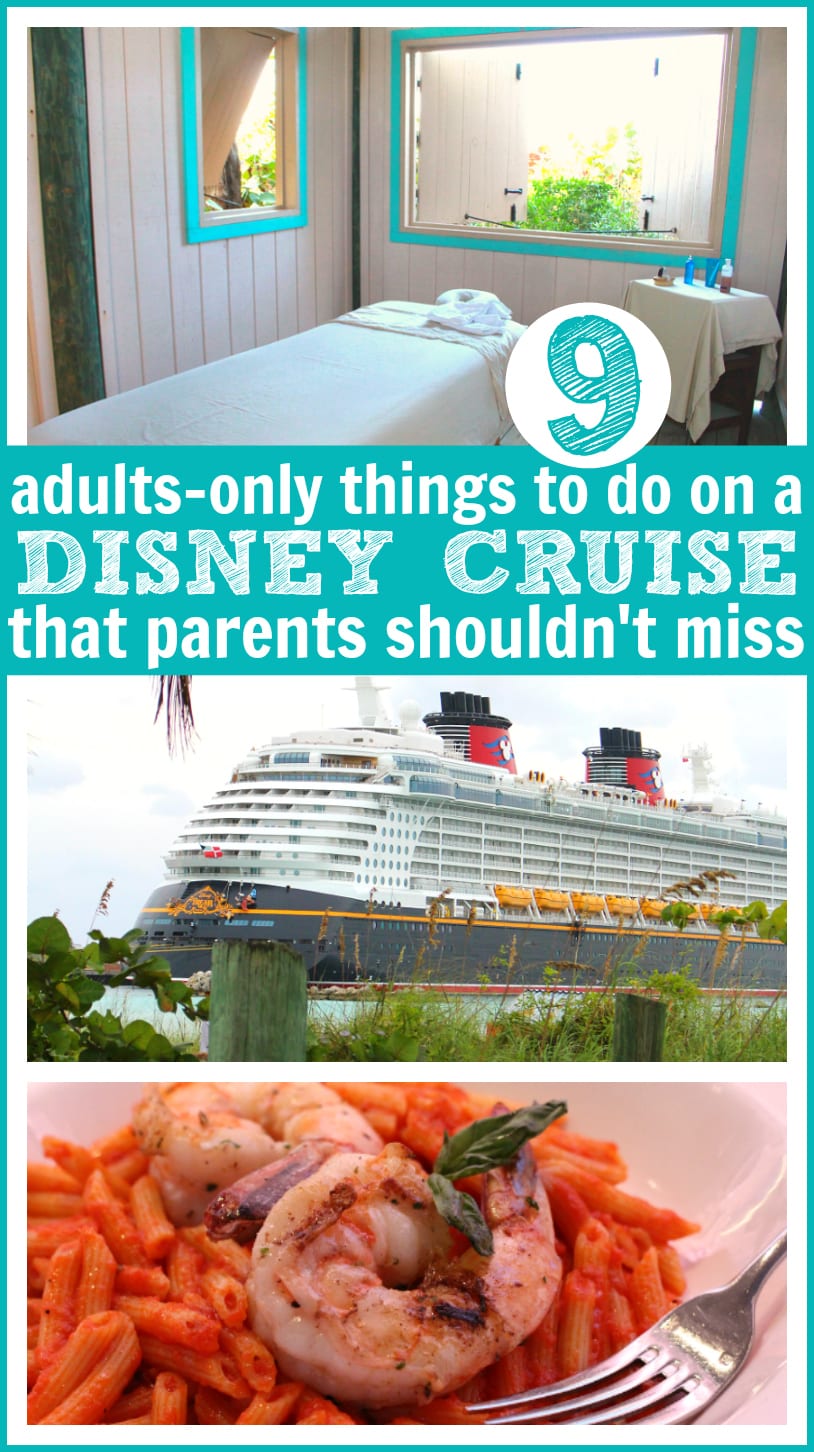