It’s more than a press conference. It’s an experience. Here’s the Best from the Star Wars: The Last Jedi Press Junket. This post is sponsored by Disney. All Jedi induced opinions are my own. #TheLastJediEvent. May contain commissioned links. 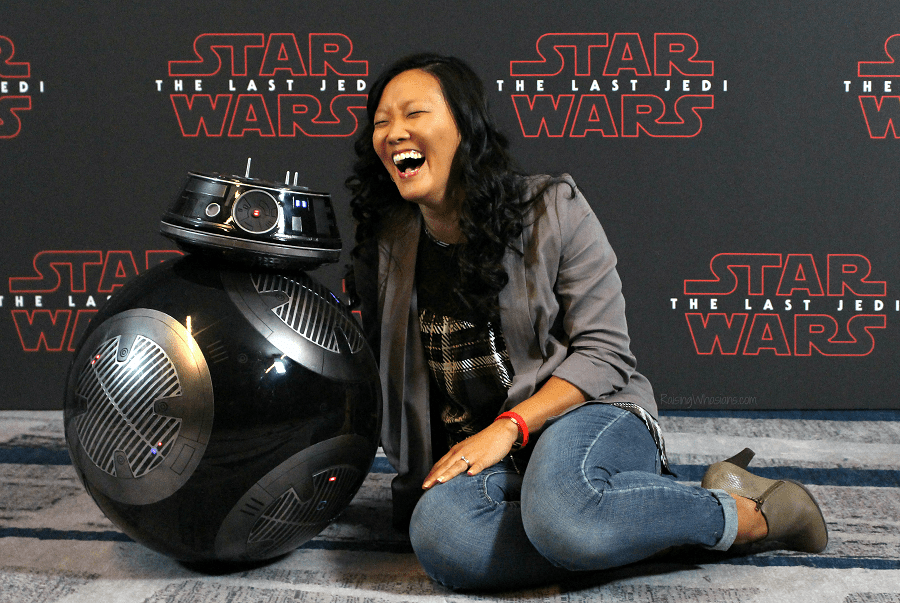 Best from the Star Wars: The Last Jedi Press Junket

This is what happens when you get asked by an adorable BB-9E droid to come to the dark side.

All work and no play? Hardly. You would think that the Star Wars: The Last Jedi Press Junket would be focused on amazing interviews and getting the latest plot spoilers. And trust me, they are. But a Star Wars press event is so much more than writing notes, taking pictures and tweeting tweets. It’s an experience, and one that I won’t forget any time soon. 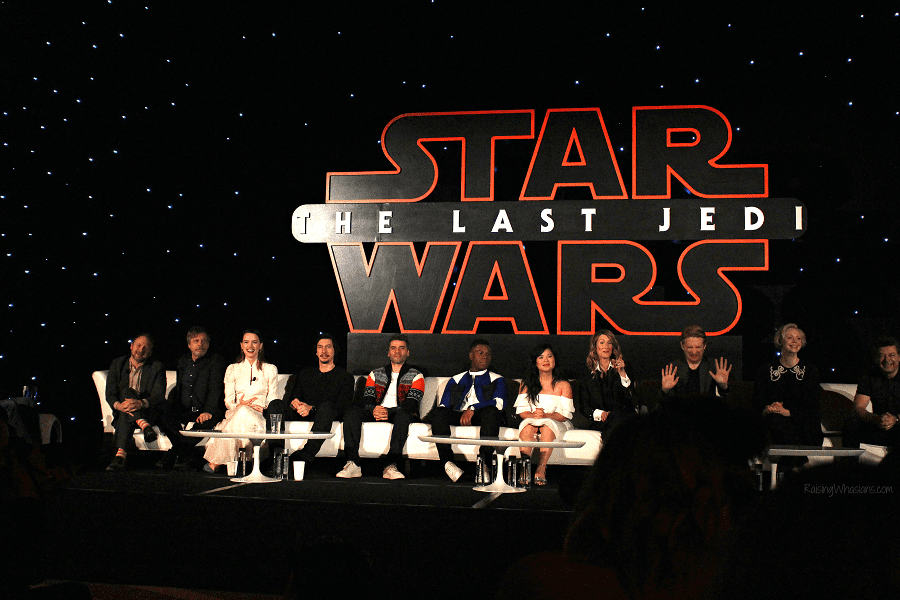 So I would share word for word what happened at the actual press conference, but I did something even better. I filmed all 45 minutes of the press conference (my left arm was DYING for you!) in this Facebook Live video above. Director Rian Johnson, Mark Hamill, Daisy Ridley, Adam Driver, John Boyega, Oscar Issac, Kelly Marie Tran, Laura Dern, Domhnall Gleeson, Gwendoline Christie and Andy Serkis all in a row – it was a slice of Star Wars heaven in one room. 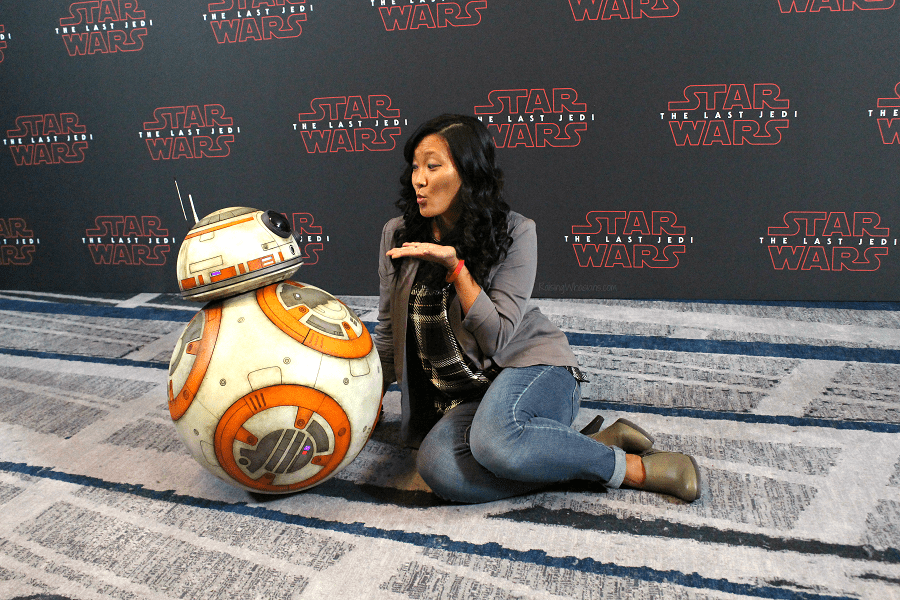 There’s exclusive and then there’s “exclusive.” We had access to BB-8 & BB-9E remote controlled droids for photos. Talk about incredible! They both moved and beeped and posed for each photo – and we all ate them up. But the droids weren’t the only ones showing off their best profiles. 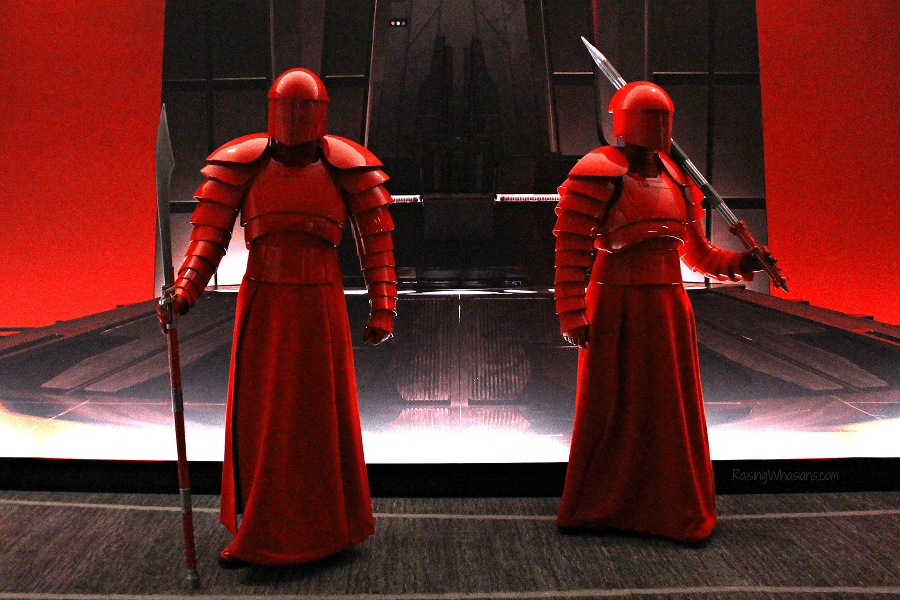 There were a pair Praetorian Guards that took their “in character” photo opps a little too seriously. Intimidating? Yes, yes they were. 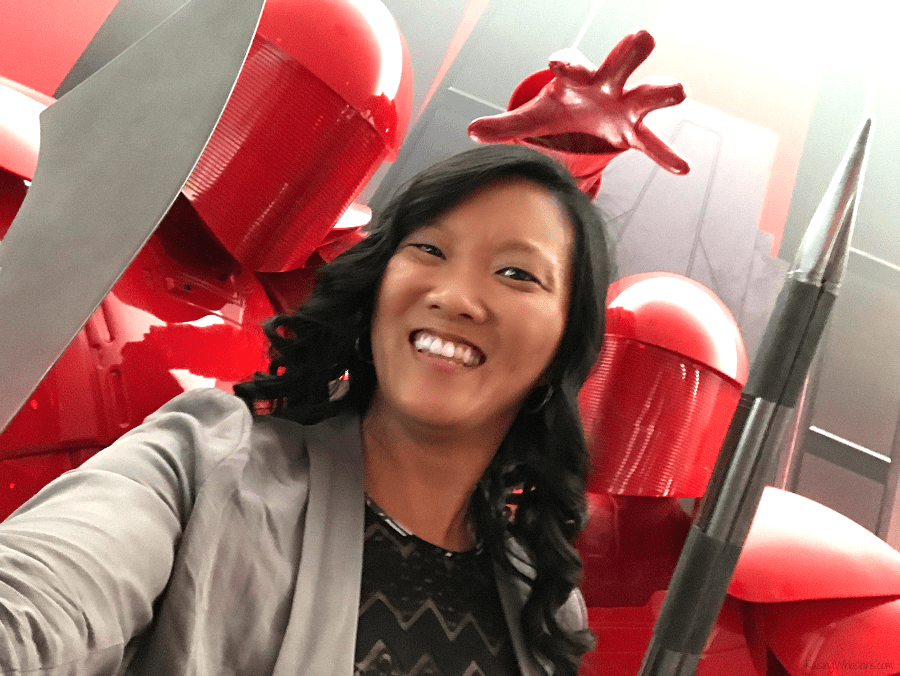 Did I still take a selfie with them? Yes, yes I did. 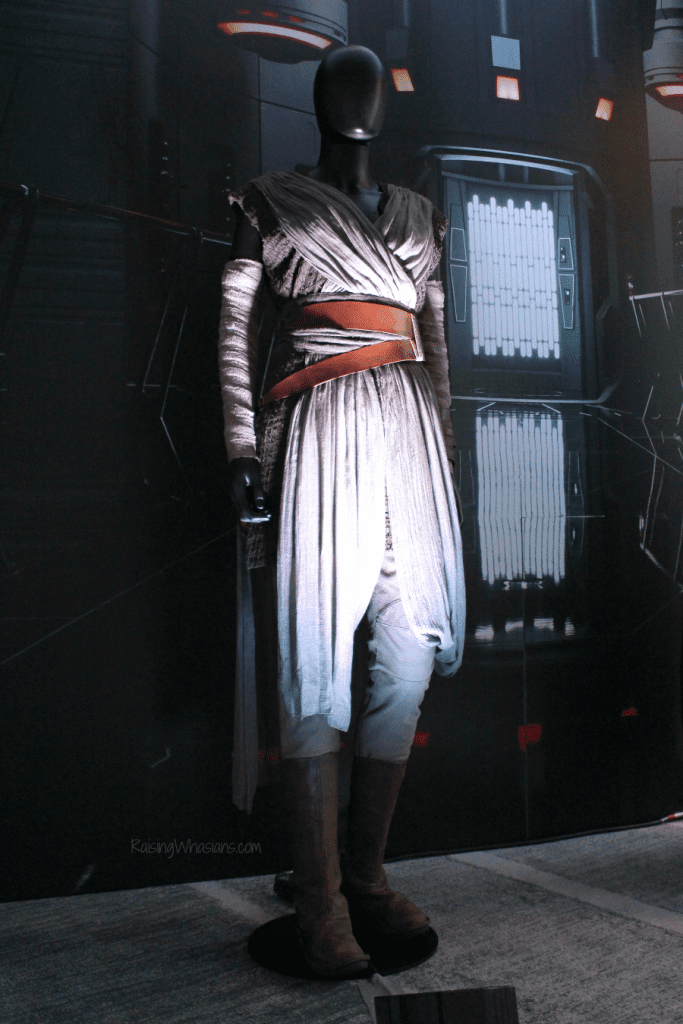 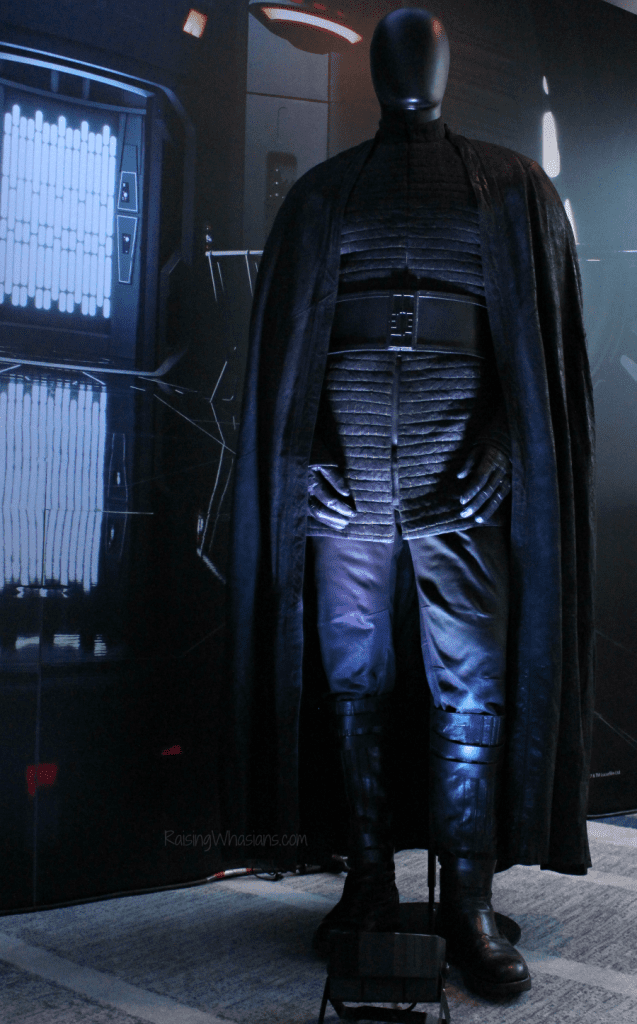 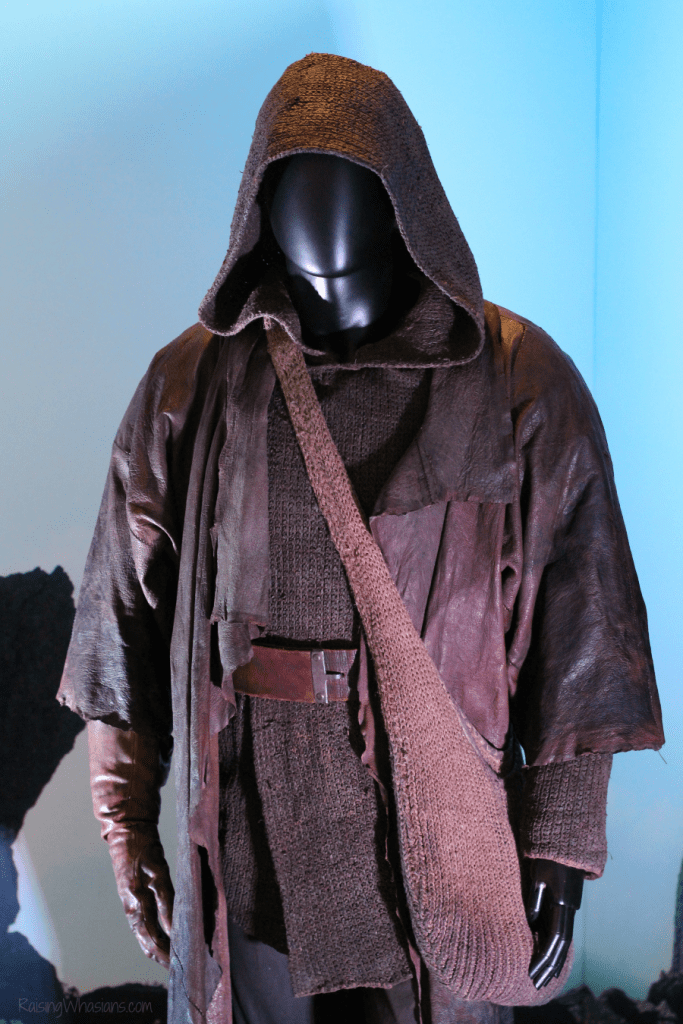 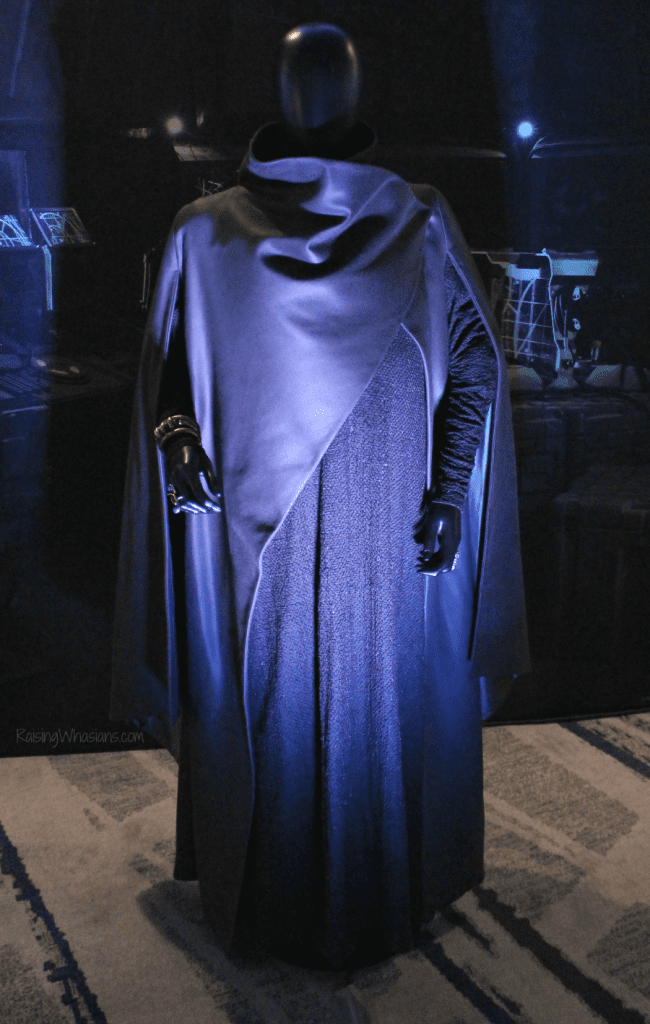 One of the coolest things was being able to see the details on the Rey, Kylo Ren, Luke and Leia costumes actually used in the movie. Seeing the sewn hems, the different materials and introduction of new colors to the Star Wars costume universe up close – amazing. I got chills just looking at Leia’s costume, y’all. So powerful. And can we talk about how they strategically placed Kylo Ren and Rey’s costumes together? 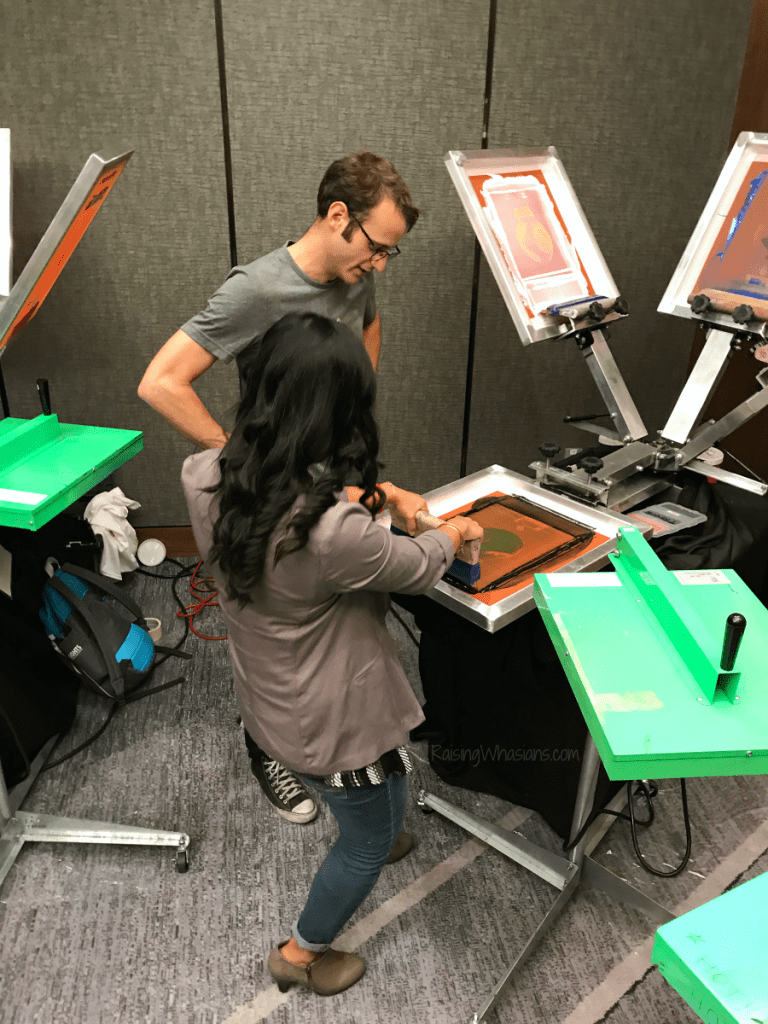 Put Blood, Sweat & Tears Into Your Own T-Shirt

Ready for a funny story? Back during The Force Awakens Press Event, we got to make our own screen tee. Super cool, we used the tools, paint and scraper and got to design our own tee. This year, I just assumed we were doing the same thing. I jumped in to make mine and the guys were all “Um…we make them.” But using my Jedi mind trick (or charm, whatever), I convinced these guys that I should make my own BB-9E T-shirt. I may or may not have been the only person to do so! 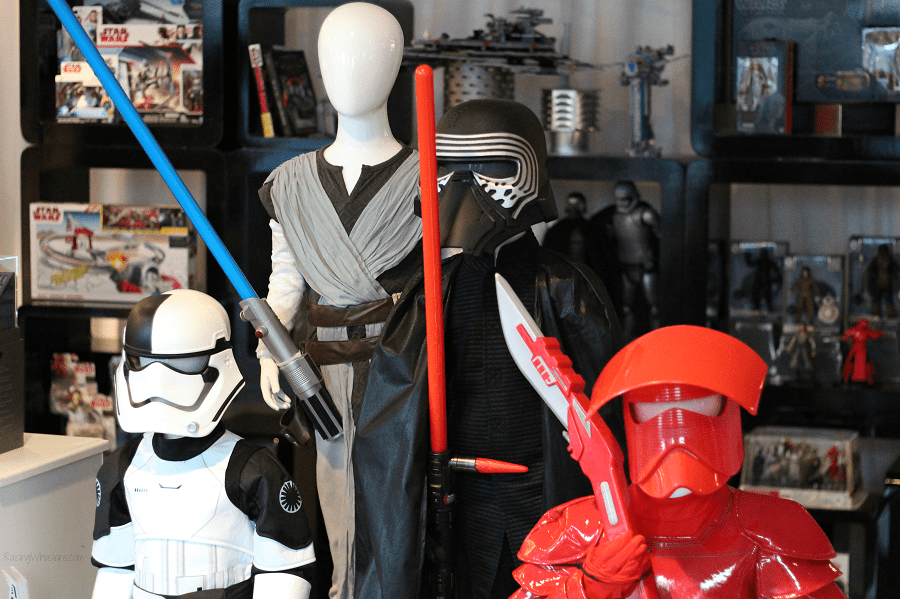 All of The Last Jedi Products

There’s nothing better than a playground filled with Star Wars everything. On display were the latest released merchandise for Star Wars: The Last Jedi. And I’m not just talking games and toys. 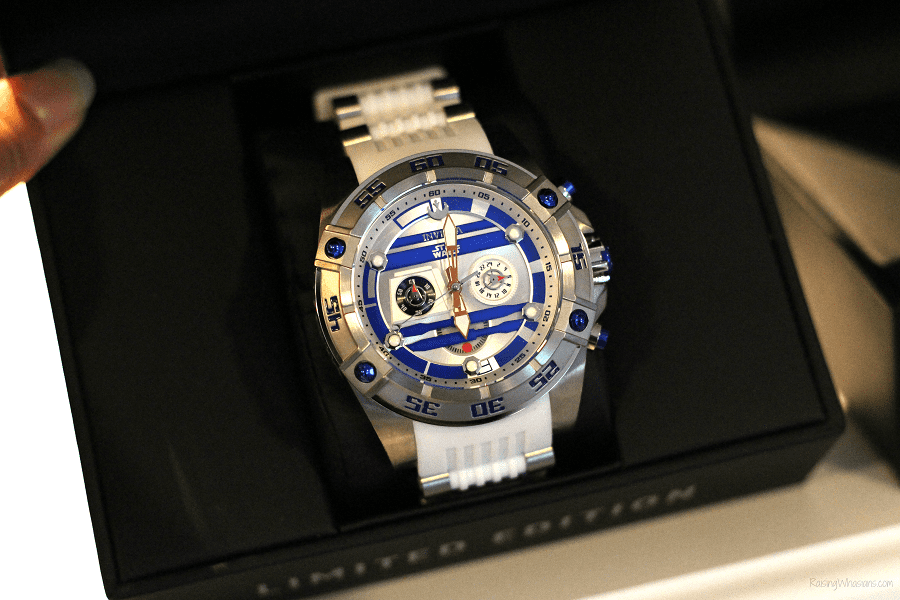 I’m drooling over shoes, watches and purses. I’m picking out our family’s Christmas pajamas. We got a closer look at the littleBits Droid Inventor Kits as well as our firsthand demo of the Star Wars Jedi Challenges VR where you can lightsaber battle Kylo Ren and try your own strategy game of Holochess. Even Phillips was there with galactic level electric shavers. 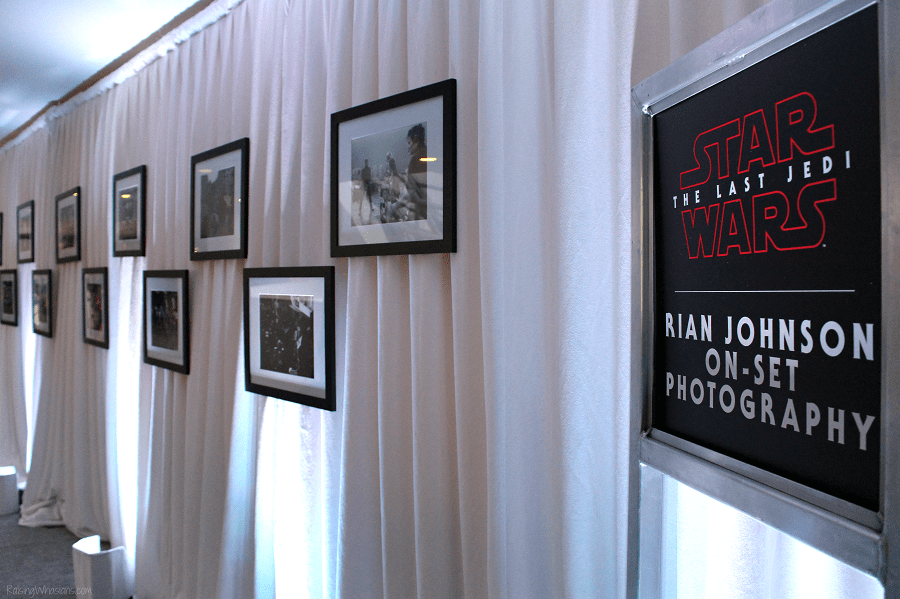 Behind-the-scenes never looked so good. There was a really neat display of framed photos from the making of the film. Found out that the set happened to be the Rian Johnson On-Set Photography display. As a photographer and film lover, I appreciated the story Rian Johnson told through his on-set photos. You felt like you were there. Also on the premises were sketches of the Disney Parks Star Wars: The Galaxy’s Edge (aka Star Wars Land). 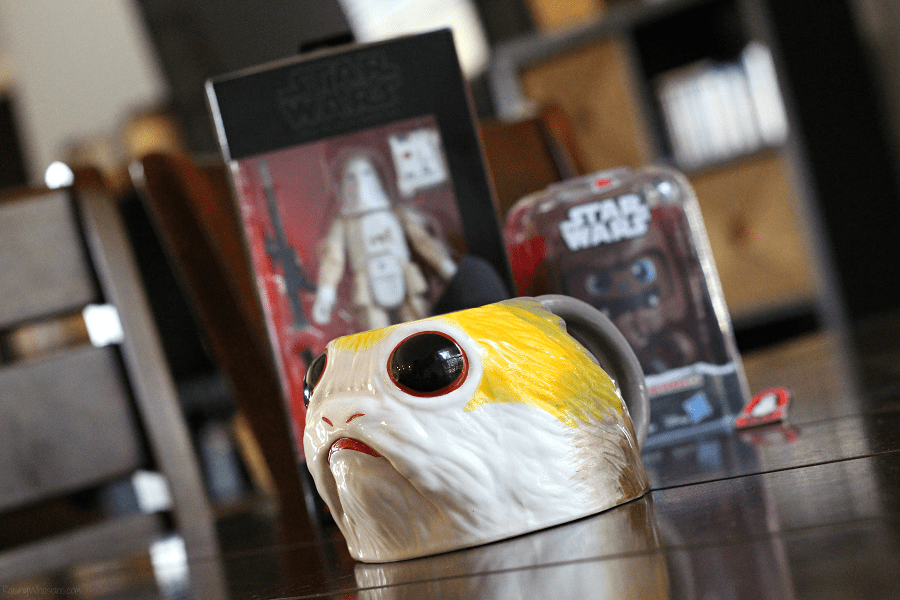 Add in some out-of-this-world galactic ice cream from Ample Hills Ice Cream, a few Yoda and Chewie faced bean bag chairs in the Movies Anywhere Lounge and a few of my favorite friends, and you have Star Wars: The Last Jedi Press Junket. It was amazing. It was stressful. It was a whole lot of nerdy/geeky fandom all in one place. And of course, swag. There’s always cool swag. In fact, you can grab some of my favorite swag items from the press junket, available right now: 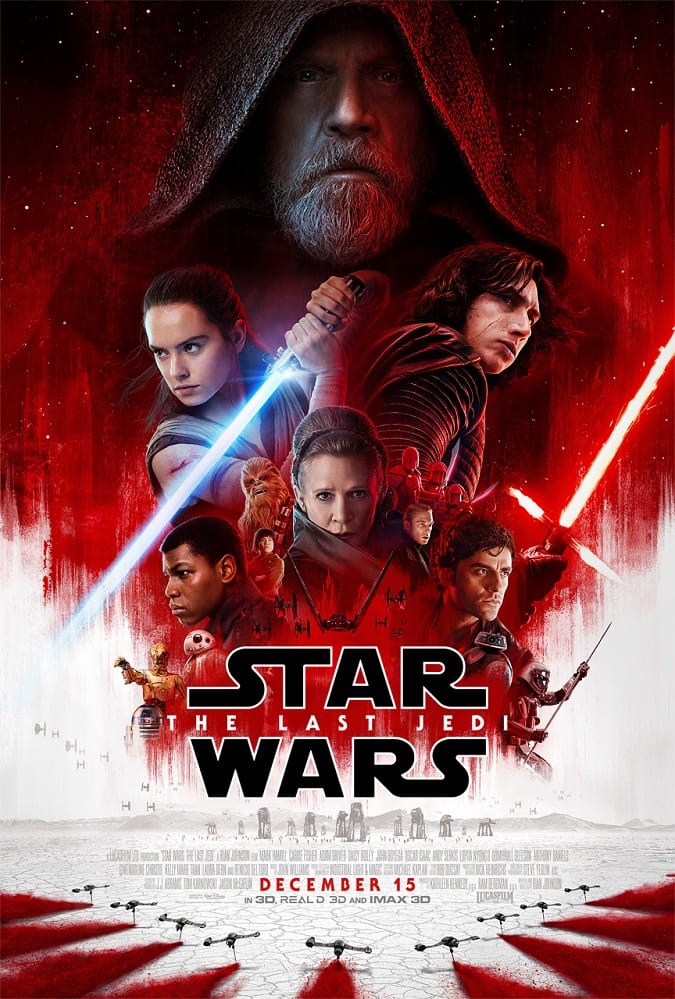 The interviews, the photo opps, the geeky world that is Star Wars: The Last Jedi, as you can see this one press event was so much more than just talent actors and directors. It’s a full experience – one that a Star Wars fan can truly appreciate. While I wish I could have taken you all there with me, I really hope you enjoyed this little insider look at the best from the Star Wars: The Last Jedi Press Junket.


December 15, 2017 cannot come soon enough! If nothing else, I am about 1,000x more excited for the newest Star Wars film to hit theaters. Stay tuned as I share exclusive interviews, sneak peeks and reveals coming to the blog next week!

What’s your favorite part of the Star Wars: The Last Jedi Press Junket?