Love The Powerpuff Girls? Celebrate their arrival to Hulu with this No Sew Powerpuff Girls Headband DIY. Post sponsored by Hulu. All super hero opinions are my own. 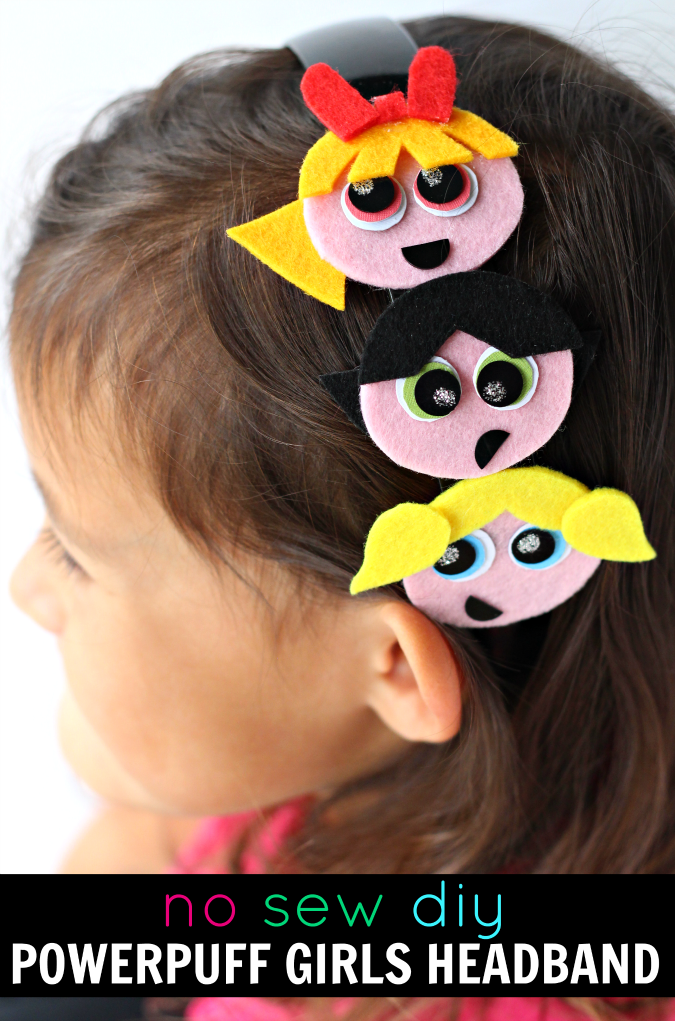 
My childhood is raising the roof right now. Powerpuff Girls is now streaming on Hulu. As one of Cartoon Network’s most enduring original series, the initial run of The Powerpuff Girls, created by Craig McCracken, premiered in 1998 and quickly became a global phenomenon. Since its premiere, the series earned two Emmy® Awards along with five nominations and countless animation honors throughout its 80 episodes.

In case you haven’t see this Emmy Award nominated show yet, The Powerpuff Girls centers on three sugar-coated superheroes, Blossom, Bubbles, and Buttercup, whose missions in life alternate between going to school, fighting crime, winning at hopscotch and saving the world before bedtime. The girls are frequently called upon by the town’s mayor to help fight nearby criminals using their powers. While their differences cause them to squabble and tease, their individual strengths combined always lead them to victory. They rely on teamwork, trust, and friendship to thwart evil (in the most adorable way). Encouraging little girls to embrace their Girl Power, I love how Blossom, Bubbles and Buttercup tell little girls that super things do come in small packages. 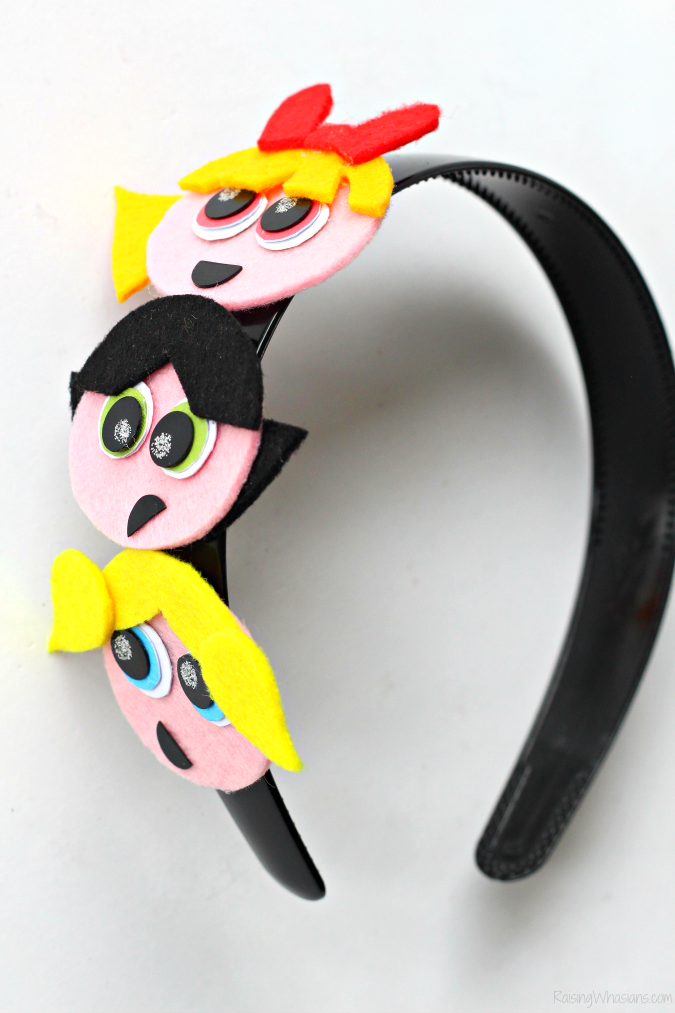 My name is Christie and I still cannot sew. However, I am a super hero when it comes to the hot glue gun. With a trio of super girls coming to Hulu, I thought it would be a great time to show my little 4-year old daughter how to embrace her Girl Power too, with this adorable yet super No Sew Powerpuff Girls Headband – all for under $6! Ready to make one of your own?

Start by cutting the edge off of each googly eye – saving the black inner circles (mine were about 5/16 inch in size). Discard the rest. Keep 6 black circles whole (for the eyes). Cut 2 of the black circles in half – these will be the mouths. 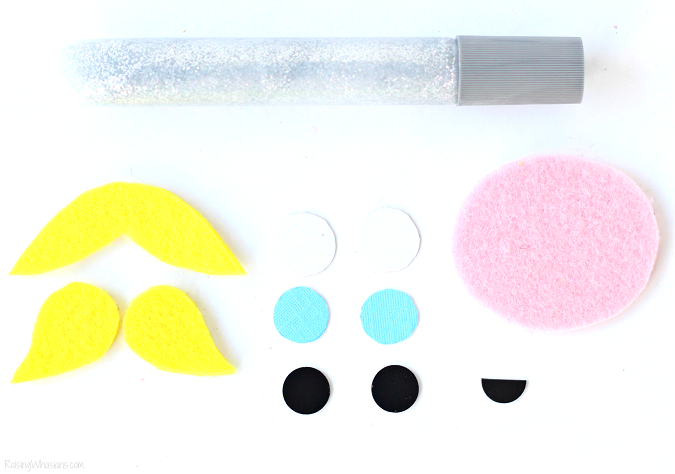 Cut out pieces for Bubbles, as shown. 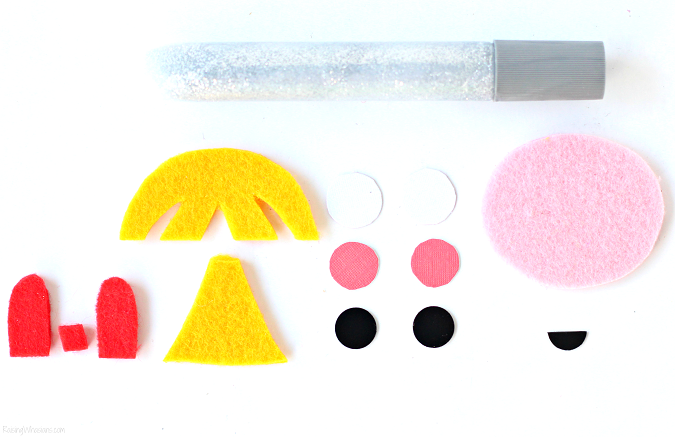 For Blossom, as shown. 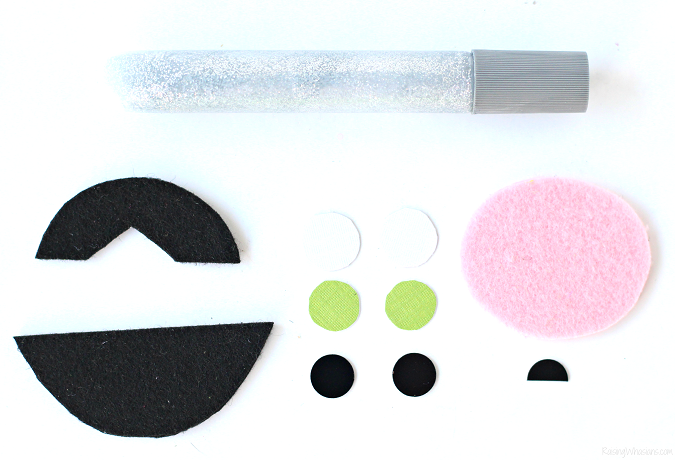 And don’t forget Buttercup, as shown. 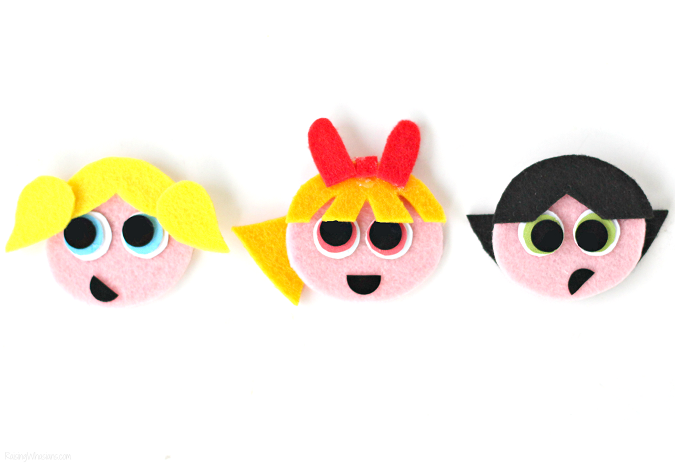 Using your hot glue gun, assemble the pieces together to create your little Powerpuff Girls heads. Aren’t they adorable? 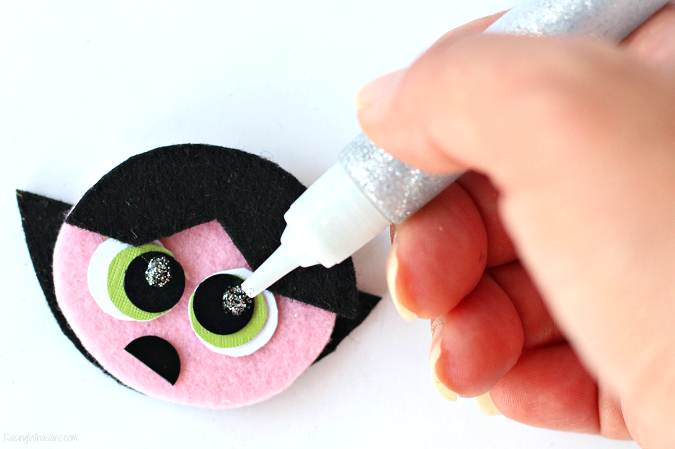 Let’s not forget to add a little sparkle! Using your glitter glue, dab a small circle inside of the black circles of all three of the Powerpuff Girls’ eyes. Allow to dry. 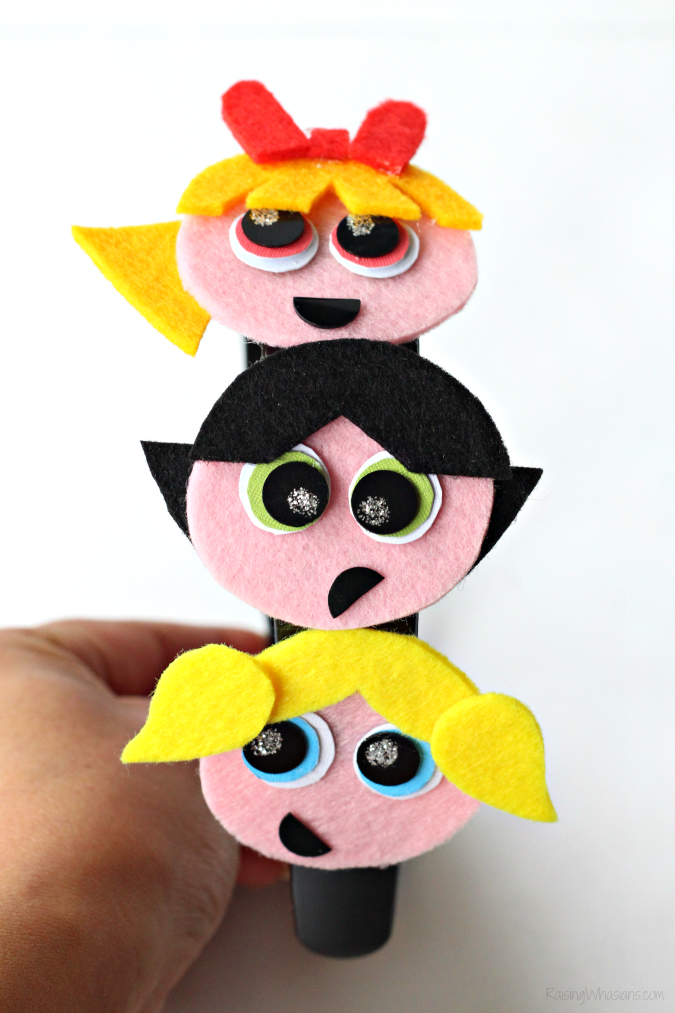 Now it’s time to grab your headband. Hot glue the Powerpuff Girls to headband in the desired design. I put all 3 heads on one side of the headband, but they’d also look adorable in the middle or spread out too. 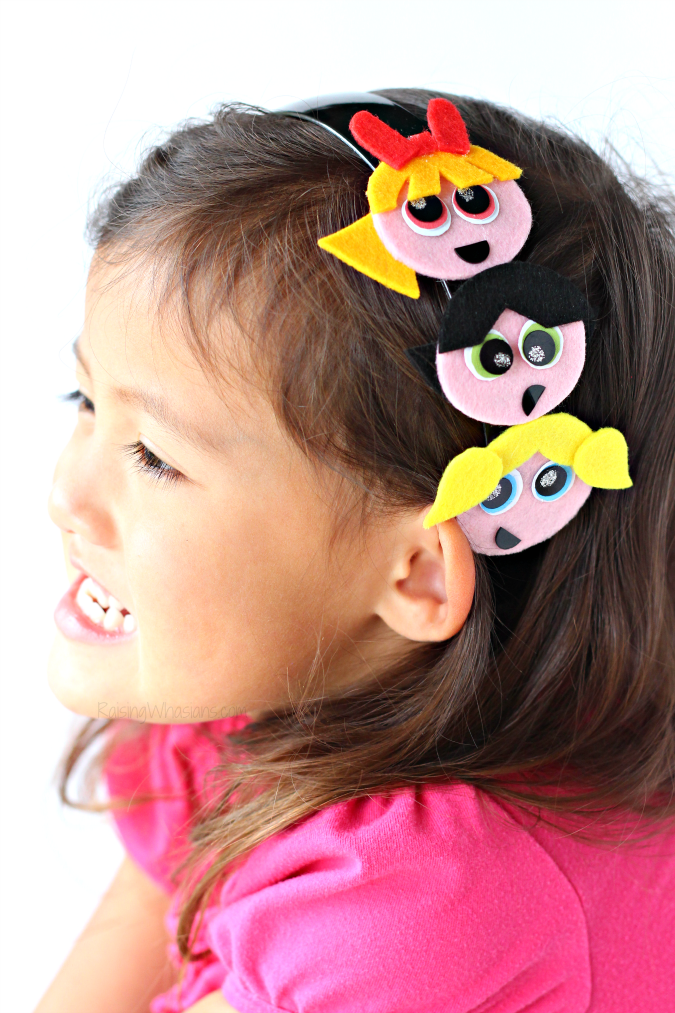 Time to shine! Let your little super girl wear her no sew Powerpuff Girls Headband and show off her girl power! 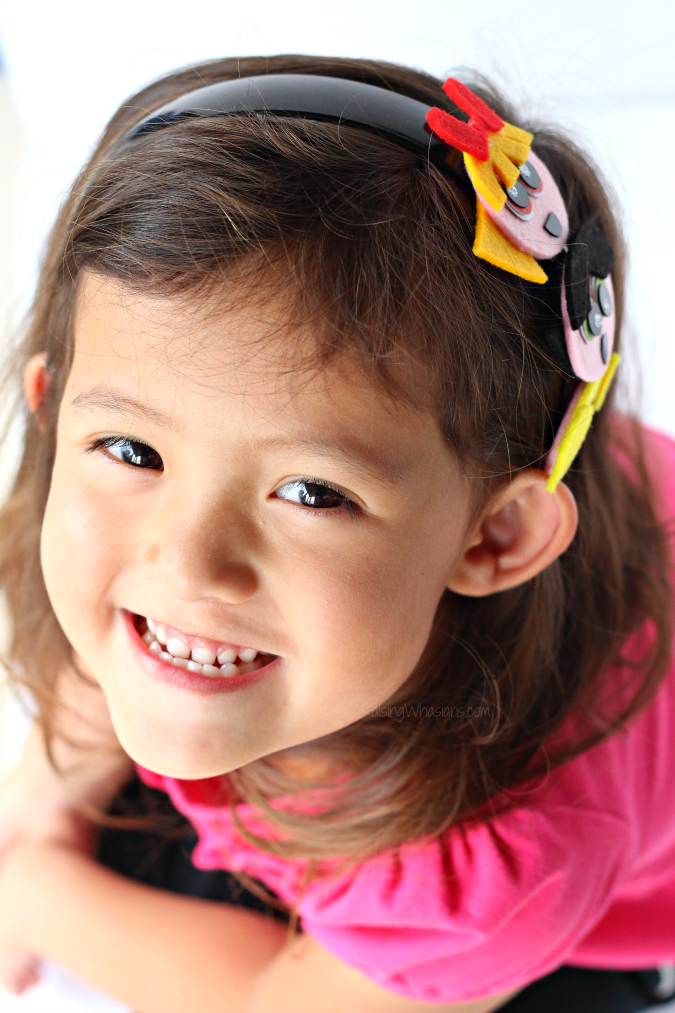 My daughter was instantly in love with her custom Powerpuff Girls hair accessory – a perfect “POW-factor” to any super girl wardrobe. 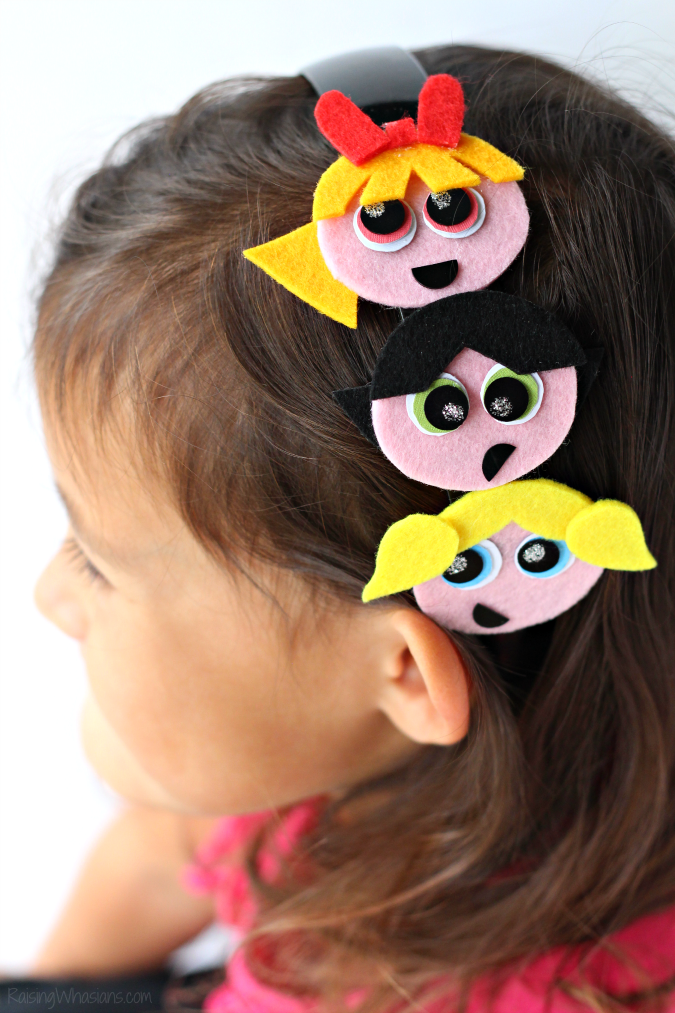 And for under $6, this is a fun DIY themed craft to celebrate The Powerpuff Girls and their arrival to Hulu. 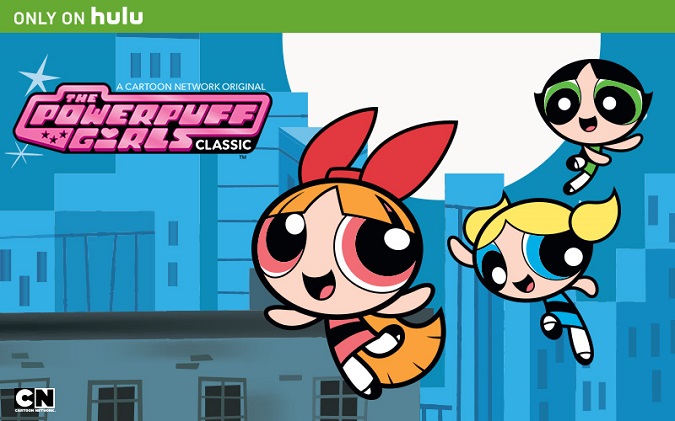 Hulu is THE streaming destination for the best of TV, and a great selection of films! Plus, you can stream almost anywhere, on any device, including gaming consoles, set-top boxes, tablets, mobile phones, and more. Visit Hulu.com to start your free trial. Follow along on Facebook, Twitter, and Instagram. And be sure to catch the “The Powerpuff Girls,”now streaming on Hulu!

Are you a big Powerpuff Girls fan? 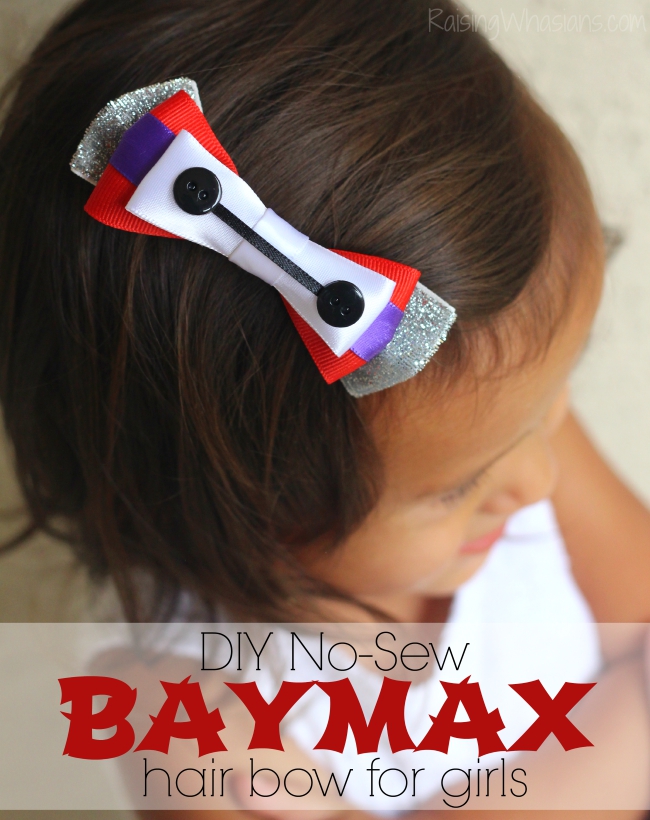