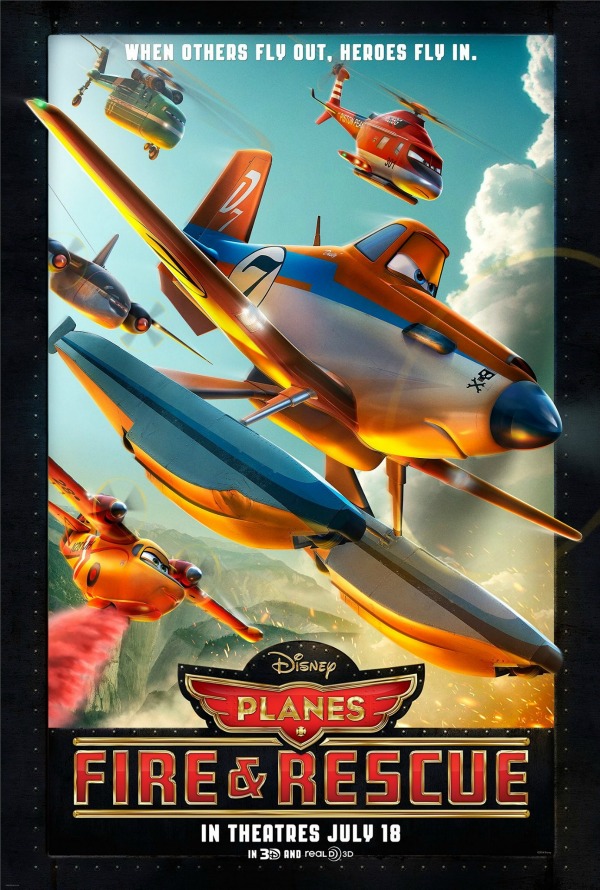 Today is the day!! Planes: Fire & Rescue is out in theaters starting today, and I know parents are wondering if the movie is living up to it’s height (get the pun?). I got to preview this movie with my kids for free thanks to Disney, so I’m going to give you the “mom” and child responses to watching the newest creation in Pixar animation with a full review of the movie.

In case you need to know the Synopsis…

“Planes: Fire & Rescue” is a new comedy-adventure about second chances, featuring a dynamic crew of elite firefighting aircraft devoted to protecting historic Piston Peak National Park from raging wildfire. When world famous air racer Dusty (voice of Dane Cook) learns that his engine is damaged and he may never race again, he must shift gears and is launched into the world of aerial firefighting. Dusty joins forces with veteran fire and rescue helicopter Blade Ranger and his courageous team, including spirited super scooper Dipper (voice of Julie Bowen), heavy-lift helicopter Windlifter, ex-military transport Cabbie and a lively bunch of brave all-terrain vehicles known as The Smokejumpers. Together, the fearless team battles a massive wildfire and Dusty learns what it takes to become a true hero. Directed by Bobs Gannaway (“Secret of the Wings”), “Planes: Fire & Rescue” hits theaters in 3D on July 18, 2014.

So following the big surprise of Cars 2, I know that many parents are now skeptical about a sequel to the beloved Planes movie. Are you wondering if the Planes will now be toting guns, fighting bad guys and having Pixar characters perish from torture?

Parents, you can put aside your fears for this movie. From the opening credits and dedication to our brave forest rangers and firefighters everywhere to the very last scene of the movie, there is NOTHING in this movie that I would consider to be inappropriate for your little ones. Even with the PG rating, I actually felt almost the opposite, that it could have gone G. Now there are some intense fire fighting sequences and a few “is the plane going to make it” moments. But the total packaged story is warm, heartfelt, and heroic.

You will see lots of your favorite Dusty Crophopper and a few guest appearances from other characters in the first film as well as a bunch of new planes, helicopters and ground vehicles to love. Sorry parents, your kids will probably be begging for a Blade Ranger soon.

And since we got to see the movie in 3D, the graphics were just amazing. The way they did the fire was really life-like and colorful. I definitely recommend seeing the action in 3D if you can (just make sure your kids keep on the glasses).

Planes: Fire  & Rescue actually gives me a newfounded respect for those fighting forest fires everywhere, teaching us all about the different planes, helicopters and vehicles working together to put out the fire. There’s different supplies, methods and communications that occur during the movie that teach kids all about teamwork, overcoming fear, learning from mistakes, and the importance of second chances. There’s no language, no violence, and I actually was surprised how much I really really really enjoyed it. Your kids will be enthralled with the story and praising our heroic firefighters after this film. Disney Pixar did an amazing job with this movie….and I think I love it more than the first. There, I said it 🙂

My 5 year old’s response? “Mommy, fires are really dangerous. Those planes and helicopters work hard to put out the fire. They rescue and save the day. I love this movie”