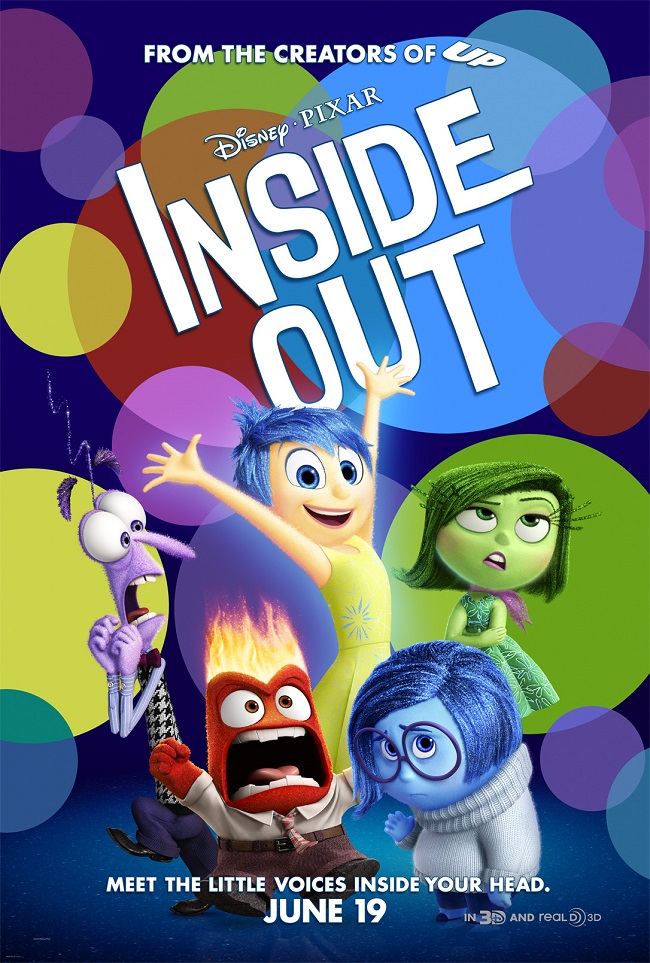 Pixar Inside Out Movie Review | Safe for Kids? #InsideOut

Today is an epic day for Disney Pixar, as it marks the opening of the newest animation film, Inside Out! But let’s not get too emotional. After all, we need to dig inside of our minds for this movie review. Come check out what this mom thought of the story, and most importantly, should you take your kids to go? It’s all inside my Pixar Inside Out Movie Review. 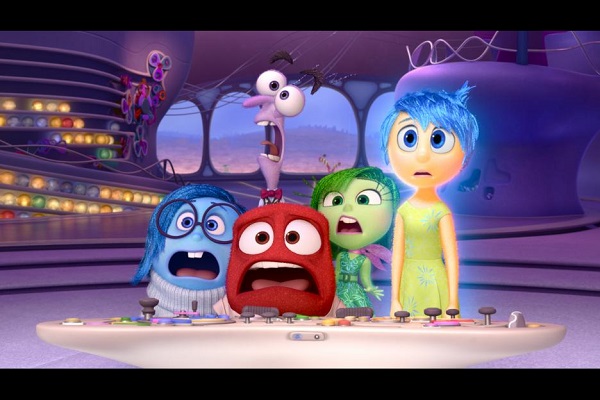 Those looking for amazing Disney Pixar animation skills, you won’t be disappointment. From the little emotions in your head, and even the streets of San Francisco in Riley’s world, there were moments when I forgot I was watching an animated film. Brightly colored, fully detailed and awe inspiring, Pixar really has gone over the rainbow for the animation of this film. Your kids (ok and let’s admit it, adults too) are going to be so mesmerized by all of the animation. And if there was ever a time to get your kids to learn their colors…..see Inside Out. 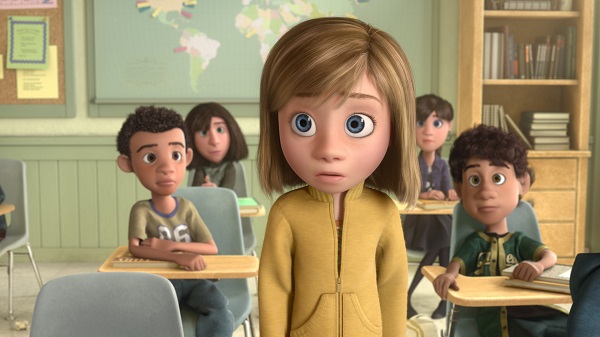 So the story follows a little tween Riley as she moves from the hometown she knew and loved to the big city of San Francisco. It’s a big emotional time in her life as the realization that her new home, new school and new life has completely been shattered. As if Pixar couldn’t paint a more emotional scene for this movie. A tween, hormones and big changes? Bring on the emotion! The scenes switch back and forth between Riley’s world and the world inside of her head. The tween battles between hiding her emotions (and eventually making the horrible decision to run away from home), and finally revealing to her parents how she really feels about the move. The little emotions also battle between the desire to make all of Riley’s memories happy ones to the acceptance that other emotions are necessary to build one’s overall personality and hope. As Riley sinks into a depressed state about the move, Joy and Sadness get whisked inside of the inner workings of Riley’s mind and need to get back to headquarters. With life and humor sprinkled through the film and the classic Disney tear jerker at the end, you leave the theater “feeling” like you just experienced another Disney Pixar film. 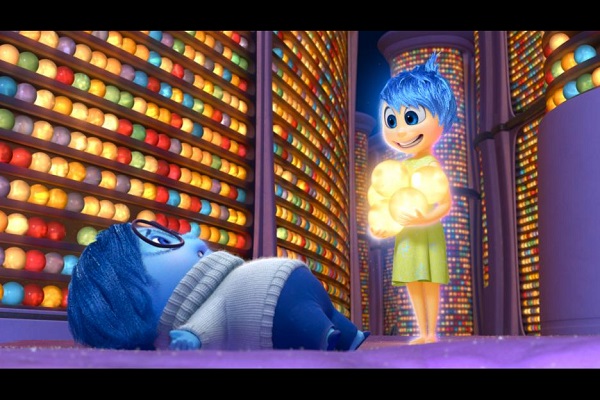 For those that have been around this blog for awhile, you know I pride my movie reviews on whether it’s safe to take your little ones. Not for me. Not for Disney. But for my little 2 year old and 6 year old. There’s no beating around the bush with the ratings, but my heartfelt thoughts for our kids.

Overall, Disney Pixar does an amazing job on digging into kids’ feelings and the importance of letting people know how you feel. You definitely feel for Riley as every single thought in her head is played out. Since this is a pretty emotional time in a tween’s life, the “running away” aspect of the film may be one to consider before taking the kids. While Riley makes the decision on her own, even stealing her mom’s credit card and walking the streets of San Fran by herself, she also comes to the realization on her own that it was a horrible mistake. She eventually runs home. So, if you’re not wanting to implant that kind of scene in your child’s mind, you may want to rethink. As far as action and violence, very very mild and all kept in the “emotional cartoon” phase of the film. 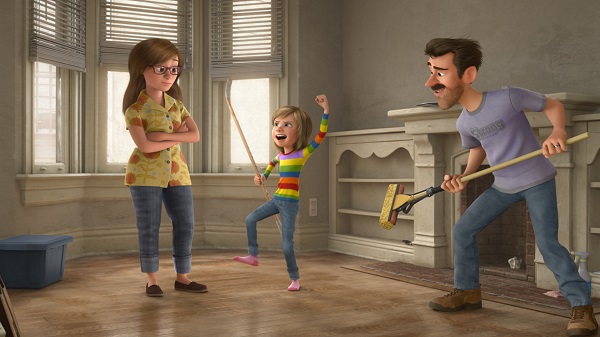 The themes of love and family are very strong in this film, so definitely one to take the whole gang if you think they could sit through it. Big group hug at the end. But there are also times when younger kids may find the story a little slow, especially when they’re digging deeper into explaining Riley’s sad state of mind. So I may wait for DVD for my 2 year old as her ants-in-the-pants stage has hit full force. Overall, I think at least 4-5 years old would do great at this film. I did take my 6 year old who very much enjoyed belly laughing through the film. The little emotions were awesome at providing the comic relief to balance the sadness. And my son couldn’t wait to watch it again with Daddy. 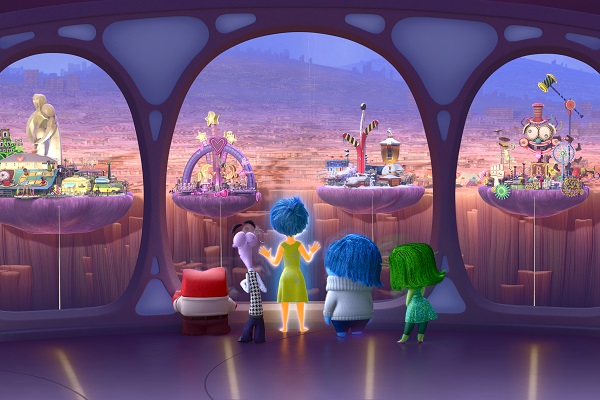 Pixar didn’t not disappoint with their latest movie, Inside Out. A clever storyline, amazing animation and quite the humorous rendition, I will definitely be owning this film when it does hit DVD. I loved the emotions and their huge part in getting Riley to come home and the strong themes of family, love and talking about your feelings. And if you needed another reason to see Inside Out, the adorable short Lava plays right before. Made me want to travel to the islands really soon 🙂 Don’t forget to grab your FREE Inside Out Coloring Pages & Activities to keep the Inside Out fun going long after the movie ends.

Disney Pixar’s Inside Out movie is in theaters starting today, June 19, 2015!

I’d love to hear what you thought of the film and if you took your littles to see it too. Share your “thoughts” and go see, Inside Out! 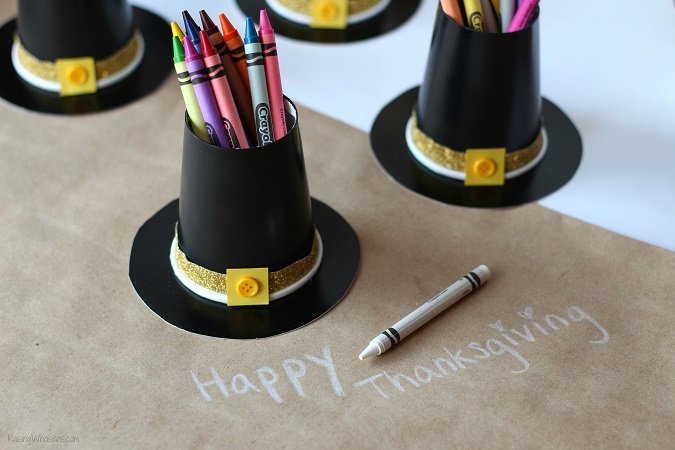