Ready to feast on Pixar’s newest short film, Bao? See Why Pixar’s Bao is the Incredibles 2 Appetizer We Are Craving in this exclusive interview with Director Domee Shi. This post is sponsored by Pixar. All delicious opinions are my own. 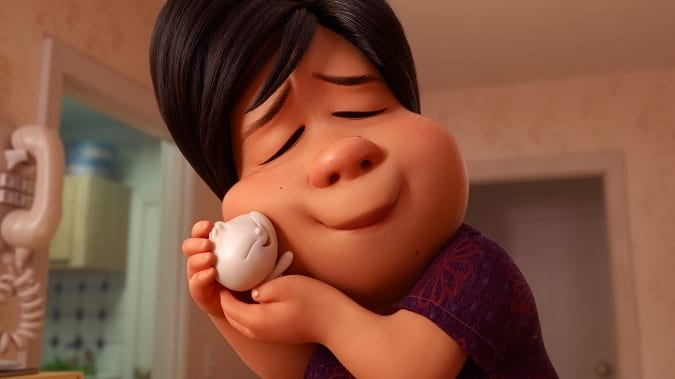 Before we sink our teeth in the main event of the summer movie season, Incredibles 2, we get to feast on the Pixar short film appetizer, Bao. There’s been a lot of buzz already about this newest Pixar short, and many reasons why we already have adorable Bao merchandise in production. But before you compare this food-centric short to that of Feast from 2014, this delicious food journey is so much more than just an excuse to eat more Chinese dumplings. See why Pixar’s Bao is the Incredibles 2 Appetizer Our Culture is Craving with an exclusive interview with Director Domee Shi and making this short more “digestible” to viewers. 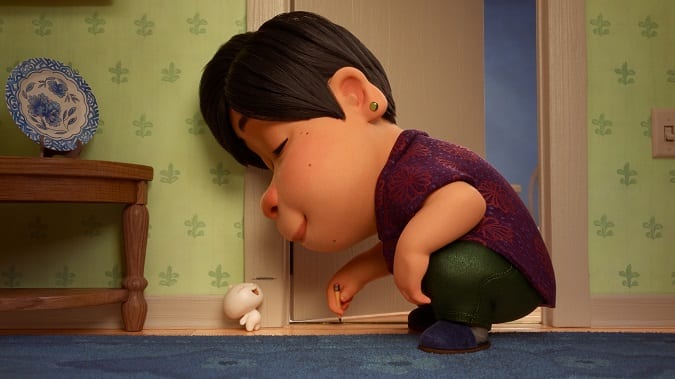 Growing up, Director Domee Shi had a very close connection to her mother. As Chinese immigrants living in Canada, the idea of family was very present in Domee’s life. As she grew up and moved away, she really reflected on the thought of her mother as the empty-nester, which inspired the empty-nester mom of this story.

“It’s about children growing up and parents accepting that change.” 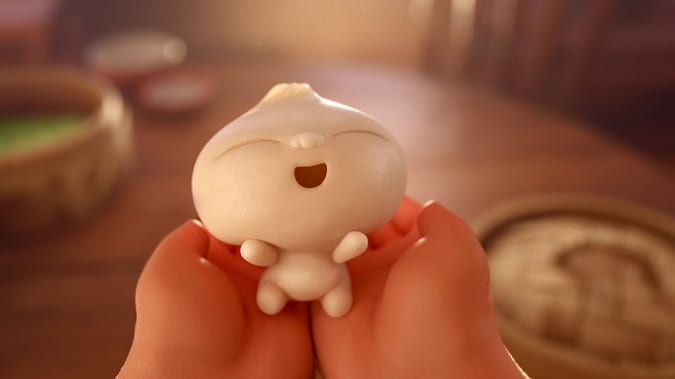 As an only child, her mom always treated her as a precious little dumpling. Using her own childhood story, Domee Shi aims to show audiences “that creepy sweet love” that only her Chinese mom could give.

“She would say things like ‘Oh, I wish I could put you back in my stomach so I knew exactly where you were at all times.”

Yes, that kind of creepy sweet love. The focus of Bao is always on the relationship of Dumpling to mom, conveying the changing relationship of parent to child. Will there be a tear jerker Pixar heartstrings pull moment? Definitely. 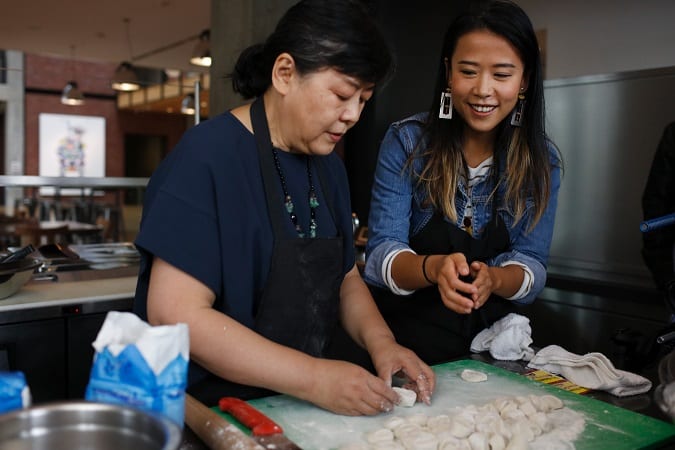 It’s About Expanding Our View on Chinese Culture

Did you know that “the Chinatown grannies” was a thing? Nope, me neither. Exploring a culture beyond our own is always a curious thing. And Bao is definitely feeding our curiosity with a full-on dive into a Chinese culture, redefining what we really knew about the Chinese way of life. Domee Shi allows us into a deep, more intimate side of Chinese customs, traditions and “-isms” that shape our view beyond just amazing food. From researching “Chinatown granny style” in multiple Chinatown locations to live dumpling demonstrations from Domee Shi’s mom (she has a film credit as a cultural consultant!), we get the privilege of appreciating a world within our world – just a little bit deeper. 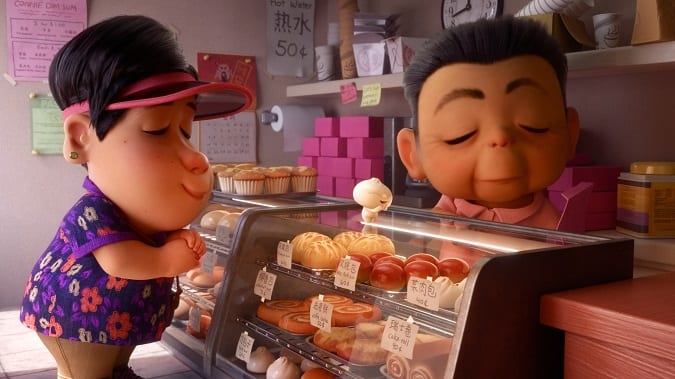 And Yes, It’s About Food Too

“In Chinese culture, food and family go hand in hand. When you want to show someone that you care about them, you ask ‘have you eaten yet?'”

Pixar’s Bao began in January of 2014, where Domee Shi was a story artist on Inside Out. She loved working at Pixar, but had an “itch” to make something of her own. She worked late in her office to make her own animated short film outside of Pixar, aka her “side gig.”

Domee Shi made it 100% certain during the presentation, she loves food. From eating it to drawing it (she had her own animated web comics of food stories and gags), eventually all of this food love inspired Bao, where she pitched her idea in the open call and finally got the green light for her “side gig” in 2015. And it’s obvious how much the food is the center of Bao. If your mouth doesn’t start salivating over the numerous delicious food items on the screen – you’re missing out. 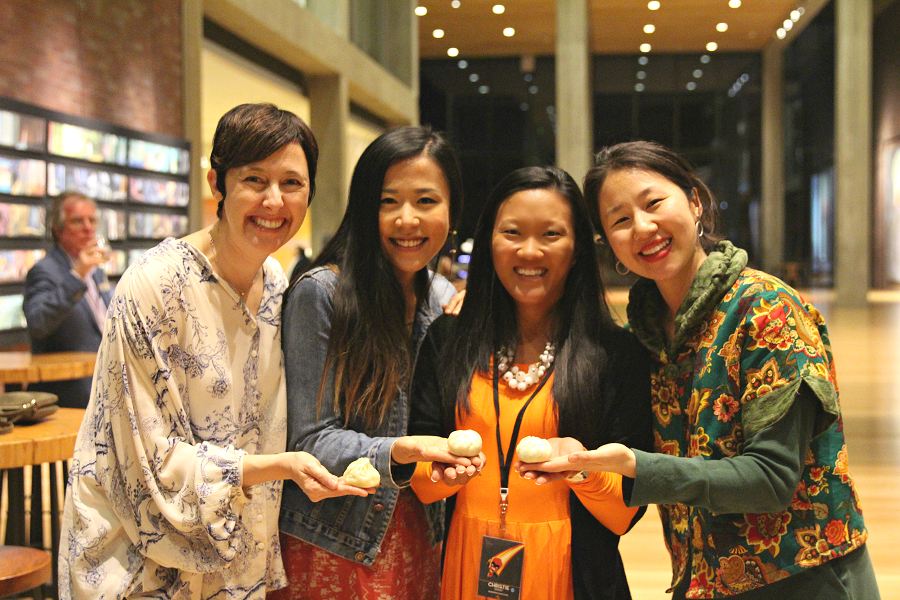 But More Importantly, Pixar’s Bao Is About Firsts

Pixar’s Bao is more than just another sweet short film that our families will love over the years. Bao will mark the first female director of a Pixar short film, a surprising first for the company. And more than that, Domee Shi is the first multicultural woman director of a Pixar short film as well, representing her Chinese Canadian heritage in a way that is so relateable in today’s ever-changing cultural climate. Overcoming gender and cultural stereotypes and challenges, Domee Shi represents hope in today’s entertainment world, especially for future Pixar animators.

From her vision in January 2014 to full reality in June 2018, Domee Shi is redefining the entertainment industry to include a sweet little life lesson on family, love, culture and food in this 6 minute short, Pixar’s Bao. Check out this adorable first look at Pixar’s Bao and see why your family will love eating up this adorable Chinese dumpling!

In Disney•Pixar’s “Bao,” an aging Chinese mom suffering from empty nest syndrome gets another chance at motherhood when one of her dumplings springs to life as a lively, giggly dumpling boy. Mom excitedly welcomes this new bundle of joy into her life, but Dumpling starts growing up fast, and Mom must come to the bittersweet revelation that nothing stays cute and small forever. This short film from Pixar Animation Studios and director Domee Shi explores the ups and downs of the parent-child relationship through the colorful, rich, and tasty lens of the Chinese immigrant community in Canada. “ 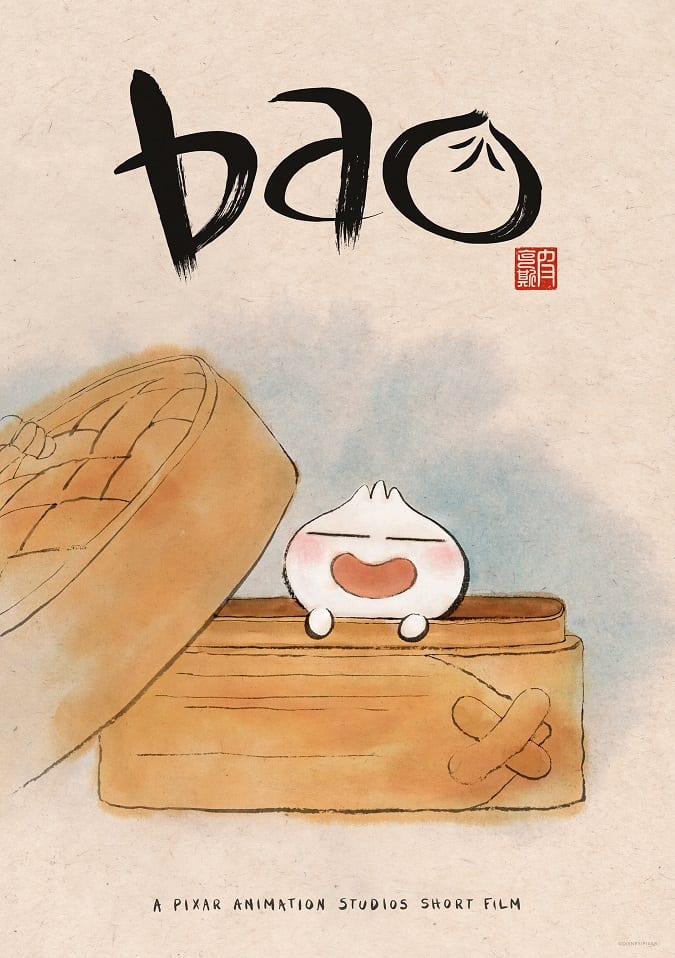 FYI, you may be fighting me for a Pixar’s Bao plushy here in the next few months. I can’t get enough of this new Pixar short! See Pixar’s Bao on June 15, 2018, opening in front of Incredibles 2. Now, who’s hungry for dumplings?

Love behind-the-scenes Disney info? Check out these popular posts from our trip to Pixar: