I got see the sneak peek of #DisneynatureBears with my whole family in exchange for this post. All opinions are 100% my own 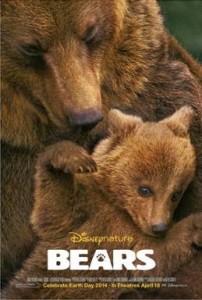 Today (April 18th, 2014)  is the opening of the new DisneyNatureBears movie in theaters. I don’t know about you, but knowing the hard work, dedication and storytelling that goes into each one of these Disneynature movies is inspiring.

I mean honestly, would you ever want to be that close to a hungry momma bear? Like ever?

But Disney has a way of getting you right in the action. You can feel their emotions, their struggles and witness their triumphs as you learn and appreciate these creatures. And every time I watch a Disneynature movie, I learn something new and come home with a new appreciation for the beautiful animals on this planet. Oh yes Disney, you do a great job of spreading the Earth Day love.

In an epic story of breathtaking scale, Disneynature’s new True Life Adventure “Bears” showcases a year in the life of a bear family as two impressionable young cubs are taught life’s most important lessons. Set against a majestic Alaskan backdrop teeming with life, their journey begins as winter comes to an end and the bears emerge from hibernation to face the bitter cold. The world outside is exciting—but risky—as the cubs’ playful descent down the mountain carries with it a looming threat of avalanches. As the season changes from spring to summer, the brown bears must work hard to find food—ultimately feasting at a plentiful salmon run—while staying safe from rival male bears and predators, including an ever-present wolf. “Bears” captures the fast-moving action and suspense of life in one of the planet’s last great wildernesses—Alaska!

Disneynature Bears follows the journey of a mother and her two cubs during the first year of their lives. To be honest, I don’t think I have had such a deep impression of a Disneynature movie since Chimpanzee. It’s so magical to watch Disney blend nature and storytelling together in an epic adventure. I mean, it’s not like you can force a bear to “act” just so you can get the perfect shot!

Narrated by the ever talented John C. Reilly, you can tell how much he loved getting into this movie. Different voice overs, a little humor, and a natural story telling voice, I actually really appreciated his candor as the story unfolded. And a story it is.

A story of survival, a mother’s love, and the ultimate journey of bears in their natural habitat. And some of those most difficult camera shots, up close, personal, and in your face. Just breathtaking from scenery to action. For those wondering if the movie is just as suspenseful as Chimpanzee, absolutely. But don’t worry, the movie certainly has a happy ending. 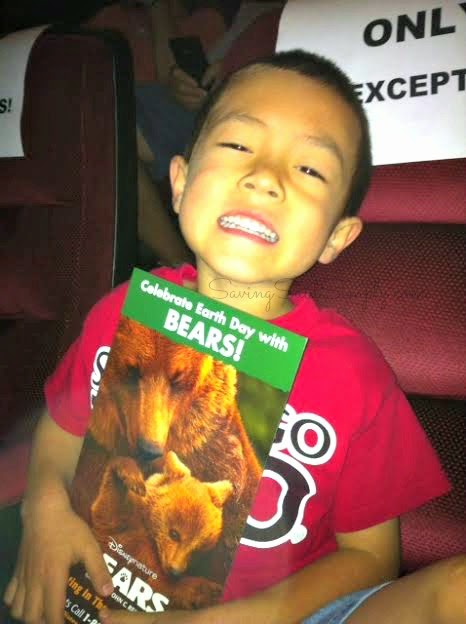 My son is really into nature and animals, so he was thrilled to be able to watch this movie! He was on the edge of his seat during the intense fights, laughing hysterically at the bears’ first trip to the shore, and loved watching the bears catch salmon during the season. There are a few scary, suspenseful moments for those wondering about little ones. The music plays a big role in this. And there is a little “blood” on-screen from the fishing…but nothing like bears getting injured.

I think the biggest thing I can pull away from this movie is how relate-able Bears are to humans. A natural instinct to protect, provide food, comfort, and even playtime. Bears are more like us then you think. And I think that is the intention of this movie. Bears are like us. Why wouldn’t we want to protect them? A movie for adults and kids alike, I think you will be absolutely touched by the new #DisneynatureBears movie.

Here’s a great round up of FREE Disneynature Bears Printables to get your kids excited about the new release!

Follow along the Bears journey with hashtags #DisneynatureBears and #MeettheCubs

Be sure to check out Disneynature Bears in theaters everywhere starting today!